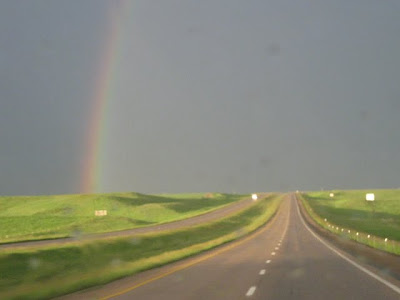 A beautiful rainbow, captured on a recent trip, somewhere near the Black Mountain Hills of Dakota 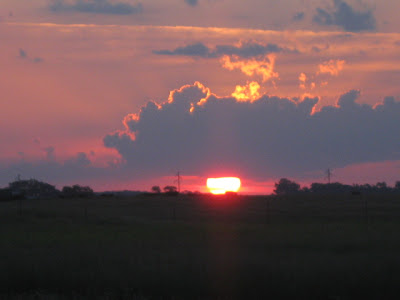 I love this picture, and to me, it is a beautiful shot, but not even close to the fire in the sky that I saw in person. This is what was behind me as I looked ahead at that rainbow in the photo above.


I've been away a lot and not been doing all the posting, reading and commenting that I normally do. As the photos posted above attest, I've been on the road, a lot! Besides, I have actually been sleeping better when I am at home. This has a bearing on my blog as most of my work here takes place in the wee hours. Sleeping in, and that is like past 6:00 AM, has me away from the computer and jumping right in with family stuff as soon as i get up in the morning.

Mrs. Spadoman works a few days a week. She takes Yoody to a YMCA Summerpower day program most days. My daughter takes Gracie to a day care pre school when she leaves for work. That leaves me with the two older kids, Anna and DJ. They sleep in pretty much every day. I go about my business and usually end up at the coffee shop in town. When the kids get up, they call me on my cell phone to let me know they are awake and functioning. They have breakfast, cold cereal, juice and toast, and I come home. Some days we have an activity planned, and others we just hang out and clean house, do chores and run errands.

It's a nice life if you can get it. I didn't know how retirement would be. Now I do, and for right now, these days of my life are grand.

I have been riding my Triumph for most anything I need to do. 47 miles per gallon and the rush of adrenalin when twisting the wick on occasion. Then I ride the BMW when I have a chance to get to a dirt trail. On one of the motorcycle forums I read, a fellow bike enthusiast sent me some maps of a dirt and gravel road trail that runs from the Wisconsin/Illinois border all the way North to Lake Superior. I'm familiar with some of those roads in Northern Wisconsin, but I am anxiously awaiting a chance to check out the ones in the Southern part of the state.

There are plenty of opportunities for recreation and entertainment around here as well. Music in the park and in the outdoor bandshell at the University of Wisconsin which is virtually right out my back door, (and down a short distance on a walking/bike path). This week will be River Falls Days with a Woodstock theme called Kinnistock. Kinni refers to the Kinnikinnick River which is a class A trout stream that flows right through River Falls towards the Mississippi River, which is also not far from here. Plenty of beautiful bluffs and vistas along this stretch of the Old Man River.

I always wondered about that. Why it is called Old Man River, yet named Mrs. Sippi. I mean, shouldn't the Father of all Rivers be Mr. Sippi?

This brief post is my attempt at apologizing for not getting to the many blogs of the great people out there that come to mine. As I participate in Ruby Tuesday, Shadow Shot Sunday, Only the Good Friday and From the Heart Friday Haiku, I have made many new blog friends. Then there are the regular readers that banter back and forth. Add to that the blog friends I have known since starting the project, over five years ago, well, it can be overwhelming.

In my perfect world, I'd like to be able to stop by each and every one every day or at least every time a new post is up. I want to say something. Even when I don't have a comment, I want to say, "I was here". Just today I caught up with one of my all time favorite blogs, Beth's Blog. I've talked about her and her work before. She is a plethora of information. Civic, self help, recipes, inspirational, humorous, and on and on. She posted a piece about some spicy ketchup, (or do you spell and say catsup?)

Being the foodaholic that I am, I am always on the lookout for a fresh new taste or flavor. I know of a regional specialty called Toivo and Eino's U.P. Original Pasty Sauce. It is a spicy ketchup used on the Pasty. The Pasty is a regional food from the Upper Peninsula of Michigan. Brought to our shores by the Cornish miners that came in the late 1900's to work the copper mines. It was their Burrito, or their Calzone. Every labor, blue collar, peasant working class has a hand held food to carry to the workplace. The miners from Cornwall had the pasty. Ever had one? Here are some pictures of Pasties and a recipe to follow. 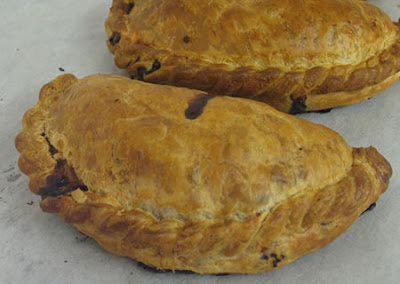 A couple of beautiful freshly baked Pasties, hot from the oven. 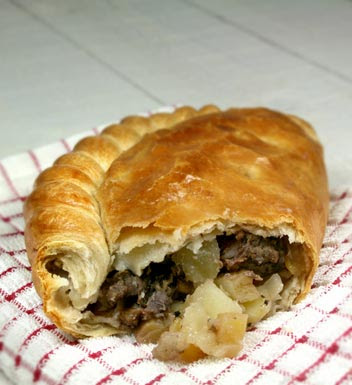 That sure looks good. Where's the Pasty Sauce? 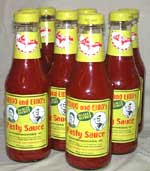 Toivo and Eino's U.P. Original Pasty Sauce. If you need some, write and tell me, I'll send you some.

HERE is a good Pasty Recipe. Give these a try and let me know how you liked them. You may have to wait for the heat of summer to go away and wait until Fall. Those "Down Under", it's already that time of year.

In the meantime, take care and be well. I'll start sleeping less as soon as I start letting the world situation, the weather, global warming, BP, Fox News and the government et al bother me again. Then I'll have some time to get to your blogs again. I do love you all as you are such great friends. I will leave you with one tidbit that caught my eye just this morning, sent to me by a wonderful couple that stand For Peace every day of their lives As the title says, it is a wide and varied mix coming from me today.

The U.S. military purchases much of its oil from BP. In 2005 the military paid out more than $1.5 billion to BP alone and a total of $8 billion in energy contracts. B-52 bombers consume 47,000 gallons of fuel per mission. An F-16 fighter burns $200 worth of fuel a minute. The military buys 3 billion gallons of jet fuel per year. In 2008 the U.S. military bases in Iraq and Afghanistan used a staggering 90 million gallons a month. In 2009 the military spent $3.8 billion on fuel at posts, camps and bases overseas. --- Truth Out

Peace to all of you and all the world.

Lovely to read about your life 'Man. And the rainbow and the sunset fit in perfectly and beautifully.
You enjoy your sleep and your great road trips, you deserve it.

Oh, just caring about your wellbeing, sir....certainly not a call to suit up and show up when you've got a relaxing/rewarding agenda. By ALL means do that! PLEASE do that! That's the best gift to pass on, the 'all is well and good times are being had by all' is enough for me.
Any time is a great time to treat yourself and those you love to simple pleasures.
Sleeping in, chasing around the grandkids, rainbow spotting, dirt trail riding....you GO!
<-- trying not to be TOO envious cuz I get my share, thank you G-d!

Absolutely love the front/back photos---rainbows are my reminder that 'G-d keeps His promises'. I thank you for making sure I remembered that one today.

Now--go PLAY and relax and enjoy what's in front of you.

Is that I-80???? I used to be stationed at Ellsworth AFB in SD. We loved the black hills - miserable winters though.

The two pictures above, you said it was taken one in front one at the back. Seems like you're in the middle of two different worlds.

The final quote...wow. We're all implicated, really, when you think about it. We'd love to just blame BP. But really, it is our demand that drives the frenzied efforts to mine out oil that will eventually, I suppose, kill the Gulf--or a good chunk of it.

I say sleep in...enjoy your summer, your retirement your grandkids...

we'll be here when you can pop in.

A wide and varied mix indeed. Yes, these are good days. Can't go on forever, can they?

Pax vobiscum and carpe diem to my Latinist friend across the pond and then some.

Thank you all for your visits here.

The photographs are indeed beautiful and I do understand how much more meaningful they are because you were right there when the moment happened. Summer is definitely the time to be out and about, enjoying the best of this world and taking time to rest, sleep and remembering pasties. Thanks for the recipe.

I will definitely be trying that recipe. Once again I am avoiding schoolwork. Decided to check out the links on my blogroll. Things have changed. Not many of them are any good. :(