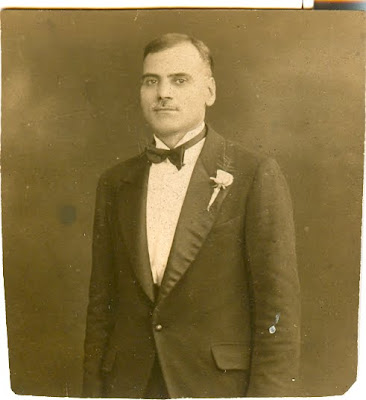 
There are old photos, and there are really old photos, like the one above of my Mom's dad, my Grandfather. I never knew him. He passed away long before I was born. Then there are the ones from my own life, but they can't be old. The ones I think are old are the ones where everyone in them is dead! Certainly the one with me and Mrs. Spadoman from 1971 couldn't be categorized as "Old", Could it?

I came across the one below while spending time looking through the photo albums this morning. It was taken on the Canadian side of the border on the Pigeon River at a place called The High Falls. At the extreme Northern tip of Minnesota, where it meets Ontario, the political border is this river. It makes a series of waterfalls, three in all, in about a nine mile stretch as it winds its way towards the Great Lake Superior.

Back in those days, we'd drive over the border with no fanfare in either direction, no passports either. Friendly neighbors, we were considered, and we'd visit often. It was a short ride to the old gravel minimum maintenance road that lead past the old mines and log sluice remnants to this overlook. Funny thing is, you could throw a stone across to the American side.

We'll be up this way in a couple of weeks. we'll be attending a Pow Wow in Grand Portage over the weekend of the 14th and 15th of August. We'll get there on Friday. I haven't missed many years attending this event since I started in 1980 or so. We camp out near the Pow Wow grounds on the reservation. Our tradition has been to get up early on Saturday and have breakfast at Ryden's Border Store and visit their duty free shop. Then, we go to the Grand Portage Minnesota State Park. This park is rather new, having been created in my own lifetime. Which, by the looks of the picture, could be older than I think!

I have many pictures of this beautiful waterfall from both sides of the border. Just wanted to expose myself a little here and share a memory with you. I shaved the beard off for good in 1986, and after a period of many years of shorter hair, Mrs. Spadoman's hair has grown almost to the length shown in this picture of her at eighteen. We're coming up on 39 years in October. By the way, we set the camera on a rock and used the timer feature. We were alone in the woods the whole weekend. 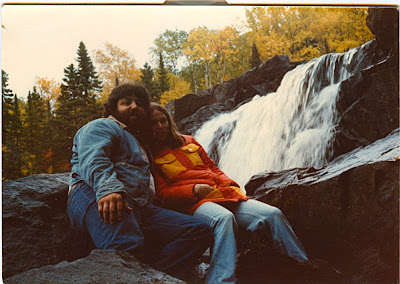 (You know you can click on these photos to get a more detailed view.)

39 years..... Congratulations to you and Mrs. Spadoman! That's pretty awesome.

Pow Wow's are pretty impressive events--highly spiritual to some, pure entertainment to others. I'm amazed every time I show up for one.

LOVE the photo of your grandfather!

OMG, how much more Italian can you get? Guiseppe Caruso! Me, being Italian myself, was immediately enthralled by his last name. Did he by any chance sing opera?

Enjoyed hearing about you and your wifes' road trips. LOVED the photo of you two.

Isn't it fun to look back at old photos?

Mel... So nice of you to come by. You're a gem amongst stones! We will celebrate 39 years of marriage in October. Last night at dinner, we were with some friends. The woman mentioned that she had visited my blog. She mentioned the picture. Mrs. Spadoman informs me it was NOT from 1971, but later, like maybe 1975 or 76. Oh well, as old as I am, hopw am I suppose to remember? But we will be going there in 2 weeks. Thanks again.

Ron... No, he's not THAT Caruso, the opera singer. His wife's maiden name is Anna Bova. On the other side of the family, Dad's side, we have Alfonso Spada and Mary Masi. All Italian, all the time. In fact, going to the Farmer's market in a few minutes to find some thin skinned Italian frying peppers to go with the home made Italian sausage we are grilling today. Serving it with a fresh tomato, cucumber and onion salad tossed with my Mother's Italian dressing.
Yep, 100% here!
Thanks so much for coming by. By the way, I could have quipped all day long about the "bro"! HAHAHAHA