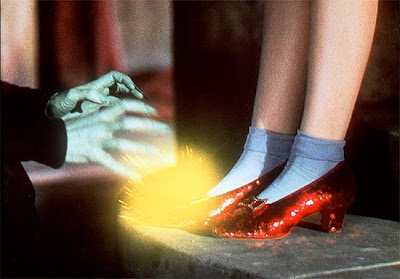 Ruby Tuesday is a great meme created by Mary T/The Teach, who pens the Work of a Poet blog. Check it out to see some great creative photgraphy. To participate yourself, HERE are the guidelines.

My Ruby submission for today is a simple logo from a business Mrs. Spadoman had up and running during the 1990's. Eat This! Catering and Craft Service was a fixture on many movie sets as well as commercial and music video shoots in both Los Angeles and Minneapolis.

For those that may not know, Craft Service is on every movie production set. The Craft Service person would have coffee, snacks and other sundry items available to cast and crew throughout the workday. Barb was among the best at it. She couldn't be stumped. From the lead star to the lowest truck driver, she'd have what they wanted. In the case of Walter Matthau, she had the frozen Milky Way candy bars. For the Producer, she'd be ready for the second meal when called upon. Always had the band aid or aspirin and bailed out the Props department many times with some unusual item demanded by the Director.

At one point, a Producer for New Line Cinema would call Barb and see if she and her service was available before commiting to Minneapolis as the production site for a first class Hollywood movie shoot. I remember when Jesse Ventura was Govenor of Minnesota. He told the people that it was his Hollywood credentials and connections that brought the movie filming industry to Minneapolis. But we know different., It was Eat This! Craft Service that was available and brought the filming to Minnesota. The Producer claims that like an army, the film production moves on its stomach, and Barb kept them fed and was the best, so he'd bring the movie shoot home.

In the early years of Hollywood film production, there would be a person available to help the Craftsmen. They'd be the extra available help that might be needed by the Grips, Gaffers, Props, Hair and Make-up or Set Decorators. So often, they would sit and wait until needed and called upon. They would be sent out for coffee or a snack until the Craft Service became an integral part of a motion picture production.

I worked for Eat This! many times. I'd roll out my Stainless Steel BBQ equipment and would make a walking meal for the one hundred plus employees in time to save the producer loads of money in meal penalties levied by the union rules. Of course they would have to pay me, and Eat This!, for the extra meal. We never got rich, but we had a lot of fun and some great experiences.

Barb left this business around 2000 and went back to more regular work. We still have some T-shirts we had made up with this logo. The red checkered table cloth with the exclamation point fork was our trademark as we did business in Los Angeles, Stillwater and Lake Elmo. Her resume includes serving coffee and snacks to the cast and crew of films like, "Grumpier Old Men", "A Simple Plan", "Sugar and Spice", "Mighty Ducks III", "Drop Dead Gorgeous" and "Jingle All the Way". She has been around the likes of Sophia Loren, Walter Matthau, Jack Lemmon, Kirtie Alley, Bridget Fonda, Billy Bob Thornton, Kirsten Dunst and many others. Always well liked, humble and respected by the cast and the crew.

In all Rubiness, Eat This! 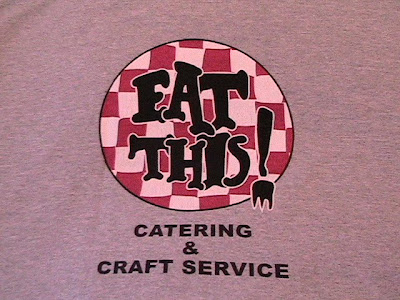 i wldnt mind a bite.

How cool and that's a professional grade logo too.

you always have a great yarn to spin and this is no exception! love these glimpses into your life.

what a rich tapestry it is.

Yup--what Rebecca said. it's not just the photo--it's the story with it.

Such an interesting story, Joe - thanks for sharing! And happy Ruby Tuesday!

I'm just a little concerned about eating the craft! What if it was raffia!

What a great story...you and Mrs Spadoman have had (and continue to have) such a rich life of experiences!

What an exceptional blog post. I really enjoyed reading the tales of your lives.

Thanks for stopping by my RUBY TUESDAY

cool! and thanks for sharing!

Hi! Just wanted to stop by and say thank you for dropping by my blog yesterday. It was so nice to meet you, although I feel like I've always known you from over at Mel's place.

What a great story you shared here. I bet you and your wife did have some great experiences and wonderful memories!

Thank you everyone for your visit to my blog. I appreciate it.

Stan.. Everyone was welcome in the truck. Make a snadwich, make an espresso, have a snack. Linger and BS with whoever else was there killing time.

susan... Yes, professional grade logo. In fact, after seeing this post, Mrs. Spadoman told me she commented and gave credit to the person who designed it. She told me her comment "didn't take". I'll get the name and give the proper credit.
Thanks for coming over here.

rebecca... I can spin yarns that are true to my own life. I have lived a lot of life, so, yarns are there. I believe this true for everyone, yourself included.
I worked in the Motion Picture production business myself as an equipment operator, special effects technician and stunt driver. I also helped Barb when I wasn't on a shoot, or sometimes when I was!

Mel... Barb whipped out a safety pin, but you were nowhere around. She did save you a very good gluten-free snack!

Peace and Thanks for stopping.

Delphyne.. Thanks for coming by.

Rinkly Rimes... Thanks for stopping by. Raffia? isn't that like reeds woven into a pattern? Hmmm, maybe we could make something to eat out of that.

Stephanie... Thanks so much for gracing my pages. Your life is rich as well. I see it every day at your wonderful place.

HOOTIN" ANNI.. Thanks for coming here. I appreciate your comment.

Marice... Thank you for being here.


Ron... My pleasure for you to stop by here. Good to see you someplace other than Mel's. Thanks.

I also worked in motion picture production. There might be a story or two if you scroll way back into my archives. I'll take a look. Maybe I need to post one.

I'm glad I finally made it to this wonderful Ruby post. Such exciting adventures. What wonderful memories you both must have.
I read the above post on your truck. So happens in college I had seen my to be husband's truck parked along the street before I ever met him. It was an old black Chevy with red,white, and blue paisley interior. I loved it. Girls like trucks too. ;)

Thank you Carletta, for stoppiong by. So, you liked the truck, then met the guy. I think women who drive regular pickup trucks are sexy and on the Cool side! By regular, I mean I don't like the big, new, shiny wheeled, diesel powered behemoths and their haulin' around their kids to soccer practice. LOL

What a lot of great things you've been a part of!
Embracing so many aspects of life - must be what keeps you young at heart and full of enthusiasm.

Mig.. Thanks for the kind words. I wish I had a young heart, and I am enthusiastic, but I must write about it instead of live it. Thanks for coming by today.