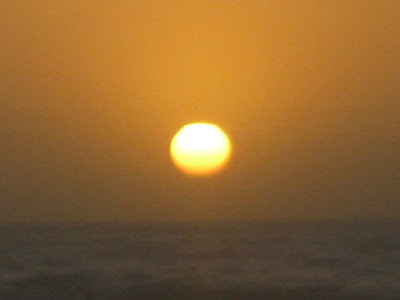 Let’s see, I need a subject. I want to write this morning. Ahhh, feels so good to be back in my routine of being up as the morning twilight starts to brighten the sky. Why before you know it, I turn to my right and it’s daytime. I’ve made it through another night. The last few hours, sitting at the keyboard, have been a life saver for me. I used to walk around the house, try to sleep, watch mindless TV, especially before cable! I've had a brief few days of sleeping in, that's all night until morning for me, so it's good to be back to getting up before Ole Sol brightens the Eastern sky.

Looks like I found my subject. It’s a generality. Everything in general and nothing in particular.

I started the segment by reading comments on my own blog. I posted some pictures with shadows in them from around my own home. This Shadow Shot theme or meme comes from Australia and I can’t remember how I got started in doing it. But I enjoy finding shadows and having the occasional cultural phenomenon of a “good” photo.

The people who participate are from all over the world. Some are fantastic photographic artists. Others just have great luck. But all of the photos are interesting. Some folks just post anything, then make the rounds of the other posts and make new friends. I have to say, I do get many hits on Sundays for the shadow shots.

I’ve made some new friends too. New readers that read my blog. And I’ve found some fantastic new blogs to go and read. So many creative people out there. Talented with their artwork and their writing. Some are really interesting and some, well, they are beautiful and have beautiful hearts. Not many men though. There are a few, but mostly women.

Some of the photos I have posted came from the recent trip I took, driving to the West coast. While in Nevada, I dropped my camera while it was on and the lens extended. After I dusted it off, I tried to take pictures, but every time I pressed the power button, the shutter would bind and not open. I used my fingers to pry the shutter apart. After all, I was on the first days of a three week journey. I needed to have a camera!

The following shots were taken with the shutter partially open. On a few of them, it gave it a strange but interesting look. Take a look for yourself. Different, to say the least. The next day, the camera had fixed itself and no longer groaned and made that binding noise when I flipped on the power. Anyway, here are the affected photos: 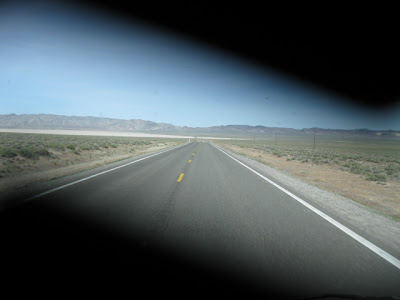 The long straight road ahead. US Highway 50 in Nevada. 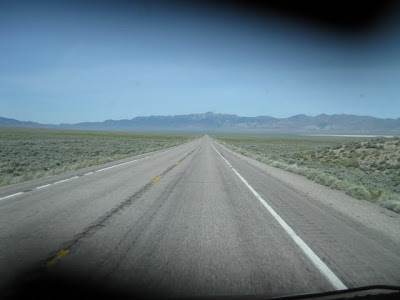 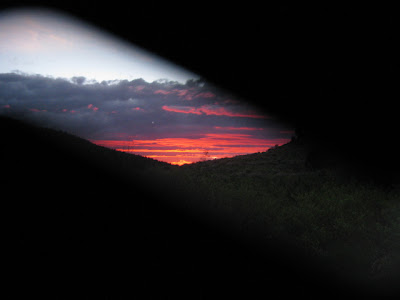 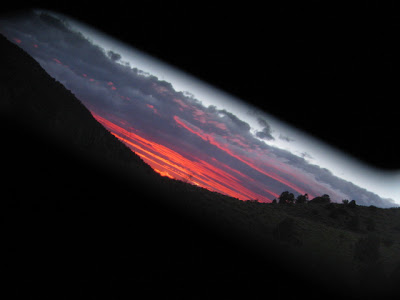 Sunset, angular. I like this one, and it was an accident to say the least. 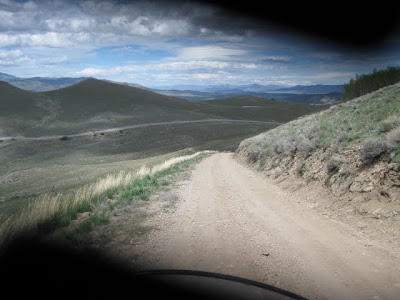 From my motorcycle, while stopped, looking downhill onto the road that twisted up the mountain. Austin, Nevada

I have to admit, I neglect many of the blogs listed on my side bar. I just don’t have the time to get to them all. Some days I start from the bottom. Many of those listed have been on my blog since I started blogging, and that’s some years ago now. Some are gone. Some have changed. Some don’t post as often or at all and are on Facebook. I had a friend request for Facebook from a guy I don’t even know only to find out it is the real first and last name of someone I have been talking to, cyberly. (is that a word?), via the blogs and e-mail, for years.

“So, that’s what he looks like?” I thought. “And that’s his first and last name?” I said to myself. I haven’t been to his blog as often as some of the newer ones I’ve discovered. I felt a bit ashamed. Yet another blog friend came to my place and wrote a comment. I remembered having an old e-mail from her. I went into my file, and as the moths flew out, (cyber moths, no doubt), I retrieved her letter and answered it.

Well, it’s daytime. No big plans today. No children to watch after. No errands to run. No projects nagging at me, well, there’s always projects. I do need an oil change on the Triumph, and a ride on the Beemer wouldn’t be a bad idea. When my friend calls to take a look at my younger daughter’s electrical system, I will need to go meet him there and let him in. I’ll ride the motorcycle there. The NOAA weather page says it will be a warm sunny day with a high of 78 degrees.

This evening, no plans. I will savor a day like today. I have been so busy that I’ll just keep the empty dayplanner page empty. I really don’t have a dayplanner except for the one in my head, and that one is empty. (That didn’t come out good, did I say I have an empty head? Oh well, I probably do, and that’s okay.) The title for this post is how I would start every Monday morning back a few years ago. I'll have to repost some of those old travel stories. My Grandson is starting to read my blog. After all, the writing is a legacy of sorts. I'm honored that he likes to read and especially honored that he likes to read what I have written.

Tomorrow, I embark on another journey of sorts. It is a soul journey. I have been asked to facilitate a support group meeting for returning Veterans. It will meet once per week on Tuesday evenings. I hope I can be of help to someone. I guess I’ll be thinking about how the meeting will transpire and how many, if any, will show up. I guess I’ll get those answers tomorrow.

Take care and be well. I hope you have Peace in your life today.

Good post, Spadoman. (Well, aren't they all?) Great photos, too. You really have a feel for the wide open spaces, don't you?

I'm a man, in case you were wondering. I know because (if I needed other proof) people round here call me 'Monsieur' and even 'Maestro' and because I sleep on the left.

You are a kind and generous soul, Spadoman...your adventures make one feel young again and most certainly free from the stress of being young.

I love the pictures with the half opened shutter, it's kinda like seeing through eyes half opened, as dawn awakens and dusk shuts down, all seen through the eyes of someone who knows how to live in the moment...

I love how our machinery can fix itself overnight...I love it when that happens...magic perhaps...or blind luck of the free spirit!

Have a great PEACEFUL day!

I love how both you and Rebecca are thinking along the lines of how we have become connected through this medium.

The photos with the half-opened shutter are really fun. Serendipity rules, I think!

Wow--what an honour to be asked, sir. And what a good choice to ask you.

Ahhhhhh for a quiet house, even if just for a few days. And if you want to talk about how the internet/blogs brought things TO your life, I think you'd find a whole lot of people would be nodding and sharing how that's worked in their lives as well.

I can't get into FB for some reason--literally and figuratively. I guess that's just not where I'm 'suppose' to be, eh?

In the meantime....wow, I hope you enjoyed that 'nothing on the agenda' Monday and all the glory that comes with being able to appreciate that which is in front of you, today--this moment--NOW.

Very very very cool photos and I do thank you for sharing them (and your Monday morning) with us.

Your photographs are always a delight since it allows us to see the world from your perspective and that's a remarkable one. I'm glad you've had a leisurely early morning to browse the blogs and write another evocative post. I'm sure those you counsel will be glad of your presence, humor and wisdom.

Loved all the photos, and hoped you enjoyed your no agenda day.

I've been absent on a lot of blogs lately too - and I've missed stopping by here to say hello. So glad I did, you always have such a peaceable perspective.

:)
I would love an empty head right now. Mine is so full of environmental science and computer science that it might as well be empty. Capisci? Keep posting! I am a long time lover of your stories, old and new!