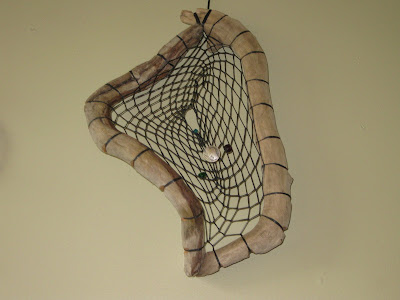 Early here, just past six a.m. Thought I'd jot down a few thoughts and show you some great pictures taken by my daughter the other evening. She sent me an e-mail that contained them, the subject was; Sunset or Forest Fire?

However, before I get to that, I just want to mention the picture I posted above is one of the newest Dream Catchers I made. (need more info, just ask) I'm using pieces of wood that may not be identical and joining them to form a circle, but not a circle in the usual sense, rather an enclosure in which to weave. I wanted to start the post off with a photograph of something. I also want to apologise for the soundless YouTube I posted on the previous post about Only the Good Friday. YouTube said I couldn't use The Doors music as I didn't have the rights. Next time, I'll use original music that I DO own the rights to.

I also need to mention that today is my Grand daughter's birthday. Lilly is five years old today. I call her Yoody and she is a sweetheart, but then again, so are all the rest of my Grand kids, (and your Grandkids, cats, dogs, cockatoos and other pets and plants)

These are amazing photographs. I use them with her permission. By the way, she does a dog rescue service and has a website. I never knew she had her own website. I knew she did the dog stuff. Click Here to see her website and some great dog photos. She has some really cute doggie puppies. I know there are many of you dog and cat and pet lovers out there. Take a look at her site.

So, I bought this camera a couple of years ago. It was an upgrade to an old early edition digital pocket camera we had. The old original was an Olympus three megapixel. It lasted through a lot and broke after repeated droppings on the floor. I bought a new model with a lot of bells and whistles, manual adjustments and features. Mrs. Spadoman never liked it. She wanted small, simple, compact easy to use point-and-shoot. I gave the bigger full-featured camera to middle daughter and dog lover/saver Alyssa, and bought a new one of the more simplistic variety for us to have as a camera.

So daughter Alyssa, knowledgable about such things as cameras and photography in general, actually uses the built in fancy features of the camera we used to have. When I saw these pictures that I am about to show you, I mentioned how well the camera was. I was told that ".....it is the eye behind the lens that makes great pictures"

Touche'. But she is absolutely correct. The photographer can make things happen with any lens. Have you ever seen any of those pinhole cameras? Someone takes a cardboard box and pokes a hole in it with the tip of a pin or small nail, tapes raw film on the inside and exposes the picture to light by uncovering the pinhole. I've always wanted to try this. Maybe I will someday, but it has to wait. I have so many projects going on right how and a busy summer of travelling coming up.

This Guy at This Site has a great site and hosts a pinhole camera fair every year. Take a look at some of these fantastic photographs taken with an oatmeal box, (or a variation thereof). 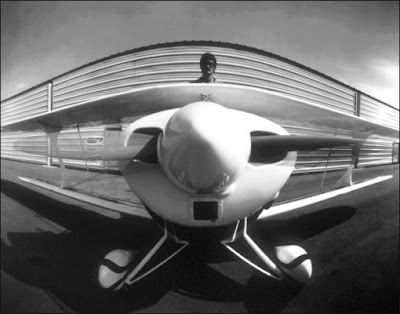 Photo by Bob Cormack with his Pitts Special Aerobatic Biplane, taken with a home made pinhole camera.

These are some great examples of pinhole photography. This is definately one of those things I need to be doing when I'm sitting around wondering what there is to do.

Before I unveil these fantastic photographs, I want to call your attention to a blog I started going to lately. It is called Thorne's World. 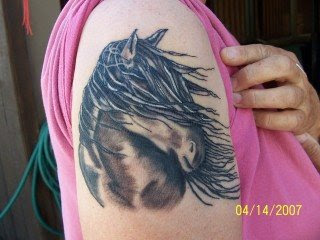 An example of Thorne's beautiful work, "The Spirit Horse"

Thorny, as another friend of mine refers to her as, has a lot of talents, and one of these is that she is a tattoo artist. She started a series telling about herself and began with her interest and beginnings in the skin art. I found it to be a great read as I have been contemplating getting an old tattoo refreshed to brighten 18 year old color, and maybe a new tattoo on the opposite arm. Have a look.


Now, here are the pictures. Sunset or Forest Fire? 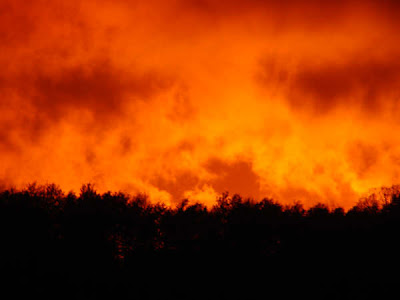 When I first saw these, I swear they were of a forest fire. We have spent a lot of time in California over the years, so has my daughter. I thought maybe they were pictures of a fire somewhere out West. Someplace we both have been or lived at one time or another. 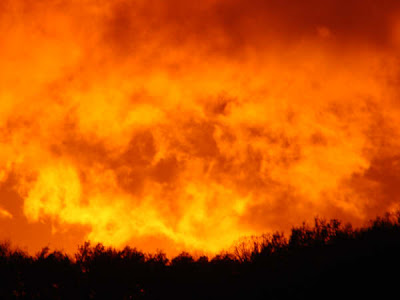 Each photograph is deeper and more intense. 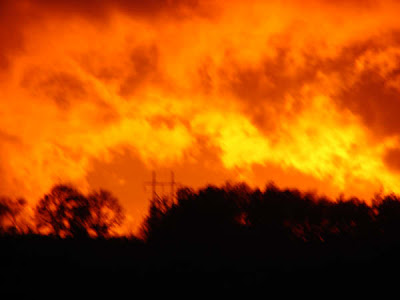 About now, I knew it was a fire. 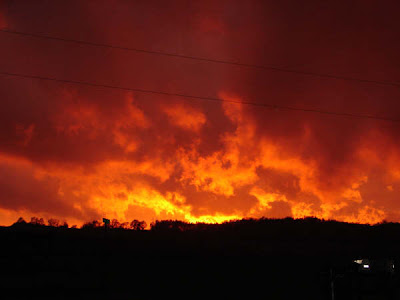 This last one nails it. A forest fire, with flames shooting up from the treetops. Flares of burning, windswept and out of control.

That's what old Mr. Sun is. A burning ball of fire. It came to us this evening and it spoke to us. Alyssa captured it flawlessly.

Peace to you all.
Posted by Spadoman at 4:16 AM

I LOVE "spadoville" - hmmmm now I need to name my corner of the planet...."Beth Nation" "Bethieville"...I will have to think on that. Great pics...and good for your daughter re rescue. I used to foster rescue dogs, but haven't done so in a while. If I ever won a gazillion dollars I'd get a piece of land and do rescue...I admire her for doing it. Have a happy Sunday!

Wow, wow and WOW!! Those are some incredible and intense photos! I swear, I could almost smell the smoke. Let's see... hehe several things upon which to comment today...
*Thank you for the lovely mention! I'm honored.
*Happy Birthday Yoody, my birthday little sister- today is my birthday, too! (or maybe I could be your honorary "Mema", that's what all my Goddess kids and spirit kin call me)
*I am going to visit your canine rescuing daughter. How cool is that?! Being a parrot rescuer and animal lover myself, I'm sure to enjoy her site. I will give her a shout out on an upcoming animal rescue post I'm planning.
** I knew there was something else. Hehe. I love your dreamcatcher! I am an asymmetrical kinda gal, so the "non round" circle speaks to me. I would love to see more when they are photographed. Please let me know.
Peace.

Wow, what an amazing sunset! Hugs to Yoody on her B-Day and hugs to your daughter for her efforts. I've got a special place in my heart for those who help critters. So many folks just don't give a damn or simply see animals as a commodity.

So much going on-- the little one's birthday.
The cool rescue site & good works & amazing photography.

I am trying to wrap my head around a not circular or roundish dream catcher.

Glad you are settled enough in your new place to start doing craft stuff.

Thank you for stopping by at the Round Circle

Beth... "LizzieLand" is what I call your place! LOL Thanks for coming by. It's strange at how many people try or have done work for dogs and cats that I have come across. I am so proud of daughter for how hard she works at it, many dogs going for betterment of the dog, but also for the betterment of the people who get them. Peace.

Thornie.... Yes, that 3rd pic actually has blurring, like heat dimples, they look so real! The Dream Catcher idea came to me somehow, and I don't know why or how, but life isn't symetrical. The circle dips and dives and twists, but always comes back unto itself as we are all born and we all pass. This is the idea. I believe this is why wood grows in curves and knots and things. Thanks for coming here. Happy Birthday!!!:-)

fjb... Thanks for stopping. I know you have a dog. What else? Animal lovers are good people. I know my daughter is a good one, and so are you!

Fran... Thanks for coming here to the Round Circle. I like that description of yours, "...wrapping you head around...." the dream catcher. YOur head is sorta round, no? They are different, but then again, the perfectly round ones that are sold as novelties are made in China. Mine are given and are considered to be sacred objects to some. Your observation is correct, I am comfortable and settled in the new place and doing what I enjoy. I have the room to work, it is good.

Thanks again, all of you. Take care and be well.

Belated b'day wishes to the little person. I'm sure her day was made fantastic! And omgosh what amazing photos the daughter took. I thought sunset and started doubting......brilliant colours--well captured!

I'd give the pinhole camera a try--just for the sheer joy of trying!

<-- going to look for an oatmeal box!

There IS a lot going on! This is a mindblowing post. I didn't know that you knew of Thorny and I come here and I feel like I just arrived at a little gathering and I really want to stay!

Those pictures are mindblowing, too. Wow. Just wow.

And Lily...well...a little girl named after a beautiful flower must certainly match her name. :-)

Peace to you,
Gina

Mel... So glad you stopped. How's that little one doing? I want to do that pinhole camera too! Sounds like a great project. Now, to find the time. Peace to you and yours. Thanks for stopping.

i like the idea of thinking outside the circle :) that is art :)

Dear Ms. Sphinx.... Thank you so much for stopping by. It is truly an honor. Yes, this is one of those places were people will come around once in a while. Lilly is here and so are her four sisters and her brother.
Glad you liked the photos. Thanks for coming by the Round Circle.

Batmo... Thank you for coming by and taking a look. Of course I'm outside the circle, that's how I know it isn';t always exactly round. I am so honored that you stopped by. Some photos, eh? I tell the daughter to publish. She has gotten an offer to make a still photo story board about that buffalo birthing she did a week or so ago.

Peace to you dear friend.

The photographs really are beautiful and I can see I've got a little more visiting in line here but not tonight. I still go to work every day, then there's chill out time, then dinner, a couple of hours painting time and some visits. Visiting you and seeing the wonderful dream catcher at the top has been very relaxing.