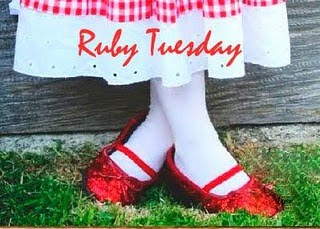 For Ruby Tuesday this week, I’m posting a photograph I took of a bird house. There were actually at least a dozen of these, all different, all on poles, at an intersection on a county road scenic byway in Northwestern Minnesota near Fergus Falls. They made up a whole little town with a store, houses and this church here. As you can see, this church has a nice Ruby red chimney, so I used it here, but further down this post are some other shots I took while on this trip, and the Red Barn I posted last week was also taken while on this trek. 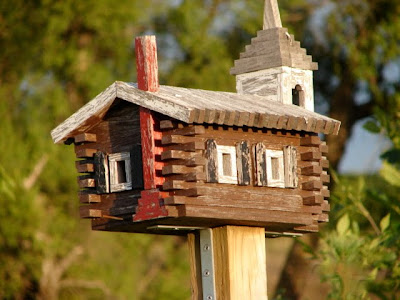 Have a great Ruby Tuesday

The Otter Tail County Scenic Byway is a figure eight loop and passes through some unique rural countryside. In the town of Vining is Nyberg Park. Seems like an ironworker with a hobby of welding scraps together has made quite a stir with his art. I’m showing the alien and the large coffee cup pouring out coffee, but THIS SITE has pictures of many more of the parks sculpture. 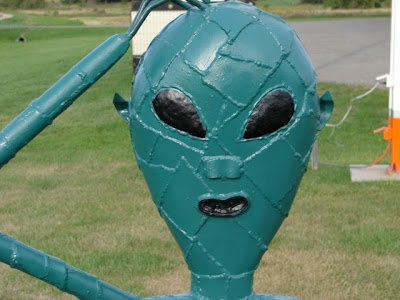 Think this Alien is lost? 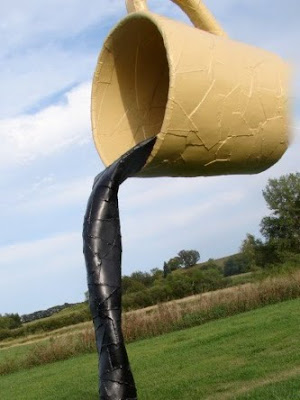 Must have gotten cold being poured out like that.

Then there is inspiration point. A hill by most standards, but a high enough vantage to see the countryside in all its glory. To the west of where this was taken, lies the Red River Valley, (a reference to red, Ruby Red River Valley maybe?), and the flatness of the great plains. 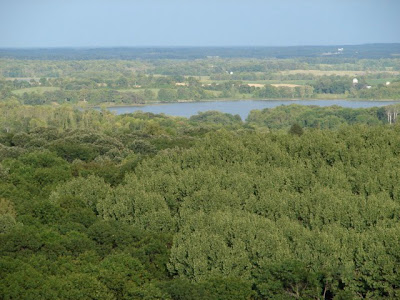 The view from Inspiration Point.

The trip was a couple of years ago and happened on a spur of the moment idea to get in the van and go somewhere. We were living in Ashland, WI at the time, along the shores of the Great Lake Superior. We were already North enough, we just headed West through Minnesota and into North Dakota. When we got to Jamestown, ND, where we saw this larger than life buffalo, we got a room and took a walking tour of the old town. The buildings used to be miles away, but were all dismantled, moved, preserved and brought together for display to the public to create a tourist attraction for the people who were curious about the buffalo. The buffalo really is big and is touted as being the largest in the world at 26 feet tall and weighing 60 tons. 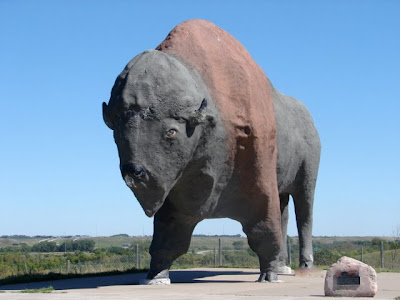 The largest Buffalo in the world!

Hope you enjoyed this little travelogue. I just felt compelled to tell a story along with my Ruby Tuesday submission. By the way, Ruby Tuesday is the creation of Mary T/The Teach who pens the Work of a Poet Blog. If you'd like to participate in Ruby Tuesday, HERE are the guidelines.

It’s fun to just get up and go now and then, without a plan, without a map, following signs and billboards. I wish I could do it more often. Or maybe I should just do it ore often. Either way, this is a little information about my Ruby Tuesday submission. The row of beautiful and whimsical birdhouses seemed pretty natural among the pines and oaks of Otter Tail County Minnesota. And I found a pretty good coffee shop in Fergus Falls called City Bakery. If you ever get out that way, stop in for a cup o’ java and a scone.

I played too. Mine is here.

love the little birdhouse, how cute! and that view is pretty nice, too!

Unique sculptures....and the birdhouse, I would like that in my yard somewhere.

Won't you visit my Ruby Tuesday? I'd love to have your company today.

Oh, there's a place on the backroads.......somewhere around here...the fella does iron dinosaurs. They're cuter than cute. Happy dinosaurs wandering in his fields.

And how could ya not like the idea of a birdhouse village?!

I'll have to give thought to that, being an admirer of birdies and their houses......

Thanks for sharing all this with us. I sooooooo need to get in the Jeep and just GO!

ok, so I wanted to live in last week's barn, and now Mini-Me wants to live in the bird house

Thanks for coming over to Round Circle for Ruby Tuesday!

Liz... LOve your Hoops photo, and right after the NCAA Championships!

Johnny Nut... Thanks. It is a cute bird house. I need to return and photograph them all and show the village. I love your site by the way. I used to live in King Salmon! The view is nicer there!

Hootin' Anni.. Love your site, love your name. Thanks for your company today!

Mel... Iron dinosaurs. I like the big oversized things you see on the side of the road. I'm gonna have to make some bird houses, they seem pretty popular. (Wish I had a Jeep, lucky)

I, Like The View... Yes, I'm going to make birdhouses with Dream Catchers in them somewhere. Glad you like the birdie house, Mini or not!

The antique shop in my photo is one of my fave places to shop near Vero Beach. It was almost totally destroyed by H. Charlie, but is now rebuilt and open for biz. My Grandson was visiting when Charlie hit...what a trip, 2 teenage boys and no electricity for 3 days...ARGH!!!

Don't know about you but my travel bug has really kicked in...must be the cabin fever us Northuners experience...or maybe the age, wanna experience it all before we er...well, you know!

amazing stuffs! thanks for sharing :)

u may view mine here

Sweeet One... Thanks for stopping by. I know too well the wanderlust travel bug. I'm tryijg to get out of here and get on the road ass I type! Maybe next week, we'll see.

Marice... Thank you for coming to my blog. I will take a loki at your Ruby Tuesday offering as well.

Such splendid journey's you take.
Love the idea of the little birdhouse village, I do hope you get to see them again and take lots of pics : )

Hello Spadoman, love birdhouses. You seem like a good grandad to all the kids. My family are Choctaw/Chickasaw and my daughter works for the Cherokee Nation. She has just made a new law museum that opens tomorrow in Talequah, OK. Wilma Mankiller, former chief of the Cherokee Nation died today. What an incredible woman.

Mig... Good to see you here. Yes, I am planning on going back and taking poictures of that entire birdhouse village. I almost feel compelled to start a project of my own biedhouse town. I don't remember a bar, (pub), in this one in Otter Tail County. Maybe they had the old "dry county" laws.

donna baker... Thanks for stopping by. I think I've been to your site. I know about the passing of Wilma Mankiller. It will be a great loss to all.
Not sure of the connection beyween this post and me being a Grandpa, or the comment about the law museaum, but thanks for sharing it. I'll look into that law museum. Maybe after the Trail of Tears motorcycle ride I attend in September.And thanks for stopping by Round Circle.


Thank you all for gracing my pages.

I'd like to see pics of all those nesting boxes sometime. (An under-rated art form?). I hope they're all tenanted - so often people are reminded by the onset of spring to put them up, and often it's just a bit too late.