Getting Ready for Summer 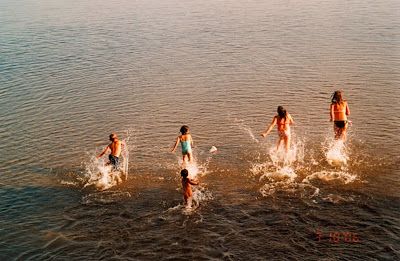 
What a busy week I’ve had. Seemed like every day I was working on some kind of project, and yet the main remodeling project I have going is at a standstill! This ever happen to you? That’s been the case here in Spadoville this week. And today is no different, I’ll be headed to The Cities.

Yes, there is more than one big city. Minneapolis and Saint Paul over in Minnesota are right next to each other along the Mississippi River. Minneapolis on the West bank, and Saint Paul on the East. When out-of-towners travel to either city they usually say, “Twin Cities”. We locals just say, “The Cities”.

I'm partial to Saint Paul. That's where we landed back in the 1970's when we moved from Chicago. We've never lived in Minneapolis. Even though these two cities are right next to each other, they both have their own individual personality. If you're from this area, (and maybe even if you're not), you can tell you're in a different city if you were to visit or do business in either one. (I guess if you're not a local, you might not know which one you were in without looking at street signs.) Saint Paul is the Capitol of Minnesota, and in my opinion, it's just better. I call it a big small town. I'm always running into someone I know when I go there, and where I live in River Falls, WI, it's just a short 30 minute drive to downtown Capitol City. 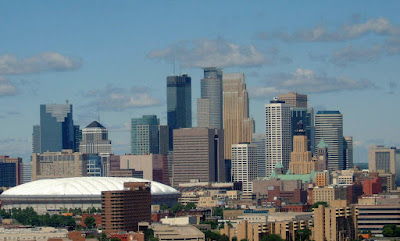 And across the Mississippi River, the Minneapolis skyline

When I return from my errands, which will be a few stops at stores where I purchase things I can’t find regularly here in the smaller town where I live in Wisconsin, I’ll be getting ready for a short overnight road trip to Ashland, the city on the South shore of the Great Lake Superior. I really miss living up there. I still go back often.

I’ll be filling up my water bottles at one of the artesian well springs. You may remember the video from a trip where two of my Grandchildren helped me haul the heavy carboys into the van. We called it the Solon Springs Water Run. This trip, we’ll go to Maslowski Beach, just West of Ashland on US Highway 2. 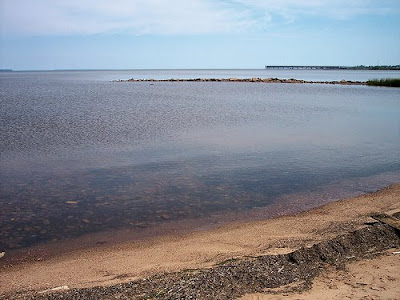 Looking at the Great Lake Superior from Maslowski Beach, Ashland, WI. This is where one of the artesian spring water wells are located

My daughter will be going with me. She has some business to take care of in Ashland, and she’ll help me with the water bottles.

I tell you, as I age, not only do I get up very early every day and eat dinner at 3:30 p.m., I also have a hard time with heavy objects at times.

The help, and the company, will be nice to have. Besides, I need someone to talk about the pills the doctor gives me. (I don’t really, just practicing for when I’m real old).

I’ll return by early Saturday afternoon. Not sure how I’ll feel about jumping in to the downstairs bathroom remodeling project. Depends on the weather. If it’s nice, I’ll be riding that motorcycle. If it’s not, well, I hope it’s nice! Maybe on Sunday my friend Steve will stop by. He’s been away to Florida and I haven’t seen him in a while. We talked about getting together over the weekend. So I do have some half baked plans, but nothing pressing.

This week had me doing bicycle repairs. I fixed up a vintage Schwinn Stingray for Yoody. Found it on Ebay. It needed tires and the paint job was kind of raunchy. Yoody wanted it pink and purple, so, I took it apart and painted it and replaces the old tires with new tires and tubes. After some minor adjustment to the seat and handlebars, she has a new ride and loves it. It is an upgrade in size from her old 16” tired blue one. 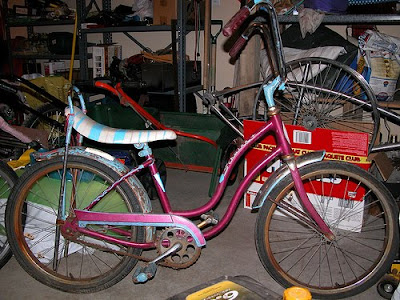 The Schwinn Stngray I bought on Ebay and fixed up for Yoody, (before) 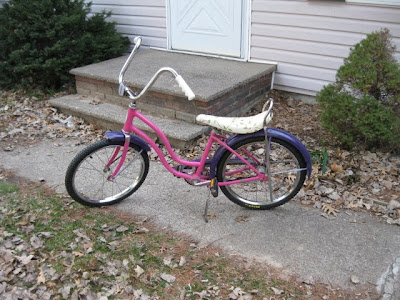 One of my stops today will be at the bike store, looking for some pink and purple handlebar streamers and a bell. My mission includes a John Deere or seed cap for Gracie for when she's farmin' in the back yard on her new ride. Some returns of the wrong size merchandise, a couple of items from the grocery, some cigar smoking and coffee drinking are also on the agenda. 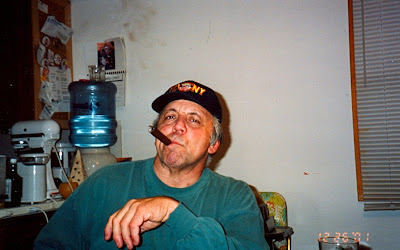 Ahhhhh Yes, my only vice

The others needed bike repair and adjustment too. Then the littlest one, three year old Gracie Jayne, never got her conveyance when she had her birthday in January. We promised her something and this week we bought and assembled a John Deere battery powered tractor for the back yard. She hasn’t been around in a few days, and this weekend will have her here. We don’t expect her to have any problems learning to drive it as her brother and sisters all had these kind of Jeeps and Dora The Explora (Explorer, I know, it’s just how we say it around here) cars when they were three. Gracie will be familiar with the idea. 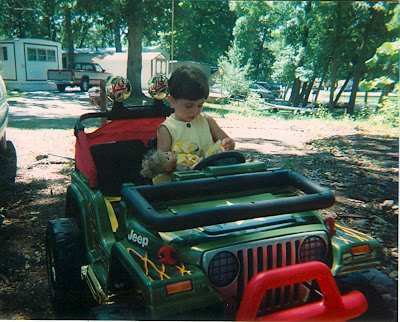 The first battery powered Jeep in 2001 when Anna turned three 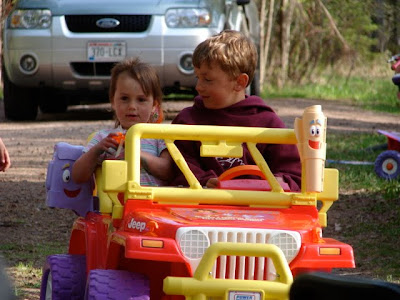 This is Yoody's Dora the Explora battery powered car with big brother taking a ride. She was three in 2007

Our back yard is pretty big. I plan on setting the mower real low and carving a path of sorts around the edge of the yard and making it sort of a roadway system. I’ll use the large cardboard box that the toy came in, cut it up, and make some signage. I’ll use regular traffic symbols. I see a Stop sign, a Curve sign and a No Parking sign in my future. Looks like the downstairs bathroom remodeling will be on hold yet again. 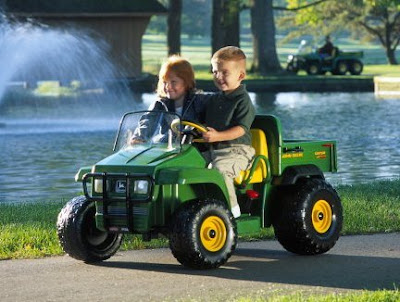 The one I put together for Garcie Jayne this week looks just like this one, (No, these are NOT my Grandkids)

So you can see, bike repair and maintenance, assembly of a large toy where I had to read the destructions, (I know, instructions, that’s just what we call them around here), and regular day to day living chores have kept me busy.

Gosh, look at the time. I better get going. I have a lot to do.

Hope everyone has a great day, or at least the best you can, dealing with whatever you have on your plate. If I get some time, I have a few projects I’ve been working on. I’ll share them when they’re ready.

Fun the grandkids have rides. I know we did not wear 'em when we were kids, but I think there was less cars on the roads back in the day, anyway as the risk of sounding preachy, if they don;t already have them, get them helmets.
My Friend's son had his life saved twice, & My own kid did too twice.... as a college student.
Anyway I think when kids get used to them @ a young age, they just form the habit.

Plus grandpa wears one on his bike..... they really have come a long way w design & colors so they are *cool*. The Bell brand can be found @ department stores & are highly rated.

Most states have bike helmet laws...

Anyway I feel like crap w chills & my room w the heat on & door closed roasted me out.
Just had to get up to cool off.

Hope whatever this is goes away soon.

Fran.. Great to see you. Hope whatever is ailing you passes quickly!
That's funny you mention the helmets. That's was one of my chores/errands. I had bought helmets at REI. One was too small, so I had to return it. In the meantime, I had bought another in a larger size.
All the kids wear helmets. I wear mine when on the motorcycle. The weather predicts if I wear the open faced or the full shield, both are D.O.T. approved, one Bell the other a Nolan.
They get off the school bus, drop their backpacks, then get on either a bike or a scooter and ride. It's wonderful to see.

erm, what does "Minne" mean?

coffee and smokes is one of the greatest pleasures in life, throw in good company (who don't object to the smokes) and it doesn't get much better than that

the X once cut a hidden pathway thru an overgrown lawn

'kay, I'm done - more thoughts (when don't I have them) but I'll spare you

oh! have a safe trip/return!!

I, Like The View... I love when you say "Crikey" I would just love to hear you say it, (the British accent and all, but maybe you don't have one of those, maybe you're Italian or American, Crikey!)
Don't ever worry about sparing us your comments here. I appreciate your thoughts.
And in this case, so similkar in some respects, (the Ex mowing a path, the uncle, the smokes and coffee!!!!) How cool is that!?!?

Thanks for stopping by. Have a peaceful day.

PS View... Minne has several meanings. In Dakota Native language, water is pronounced "Minni"
Minnesota means 10,00 lakes, or many waters, much water.
At least I think so. I'll research and get more techniocal soon.

My son had a high school teacher who is an avid bike rider. He called his bike helmet a "brain bucket".

My adult son called me out on it.... why don't YOU wear a bike helmet?

So now I do. Brain buckets all around!