When I started having Grandchildren, my life started to change. I never thought about that part of living back when, but realized something was happening when I was holding a new born child in my arms. The first was Anna in 1998. She quickly became the object of spoiling as her Grandmother and I did all the things Grandparents do. One of these things was to buy soft cuddly toys.

On one of my trips out West, I was passing through South Dakota. I wandered in to the infamous Wall Drug just to pass some time, use the bathroom, etc. As I browsed the rooms full of tourist compliance, I saw this stuffed buffalo and bought it to bring home to Anna. Anna loved this toy and still does at age twelve. This also got her interested in the real live buffalo.

A couple of years ago, I traveled with her to Custer State Park near Rapid City, South Dakota, and their annual buffalo round-up. The subject of today’s Shadow Shot Sunday are a couple of shots from that outing. I’ve included a few more non-shadow shots of that trip at the end of the post. By the way, Shadow Shot Sunday is the creation of Tracy’s over at Hey Harriet blog. If anyone wants to participate, just click on THIS LINK for the guidelines.

The first shot is a close up of some of the buffalo running by in front of us. They were on their way to joining the larger group. In the second shot, the large herd was headed towards the corrals to be counted, checked for disease and generally looked over by State Park personnel. This event takes place each year on the first Monday in October. If you go, get your lodging reservations in early. Over 14,000 people showed up for this event in 2009. They lined the tops of two ridges overlooking a small valley below. The cars, busses and RV’s were parked on the hillsides and the place took on an atmosphere of an NFL football game pre game tailgate party! 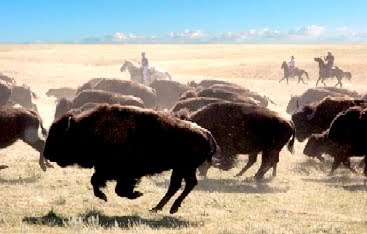 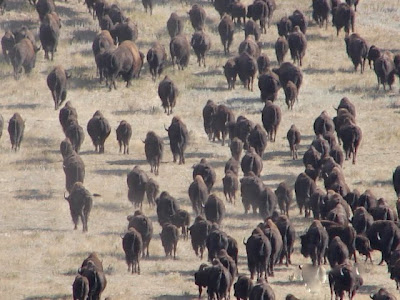 We took plenty of photos both on the way there and back to preserve our memories. One of these days I’ll get that film onto a DVD and post a YouTube. Seeing the buffalo stampede through the arroyo below us was quite a sight. The sound, the dust, the mounted riders, the beasts themselves and their shadows. 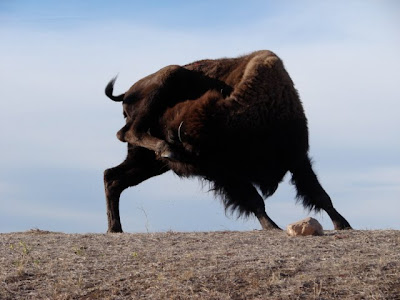 Maybe not very photogenic in this one 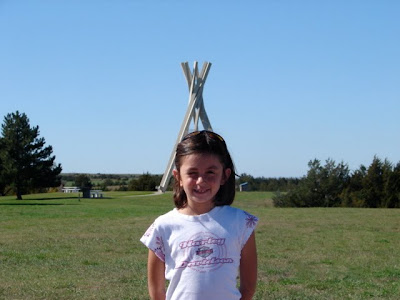 Anna, at age 8, at a rest stop just outside Chamberlain, SD 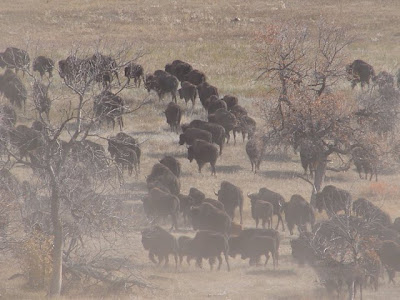 The buffalo herd, kickin' up some dust 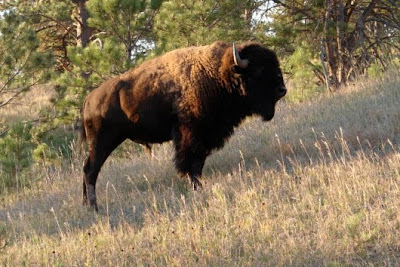 A bull waiting for the round-up to get started, but on his own time schedule 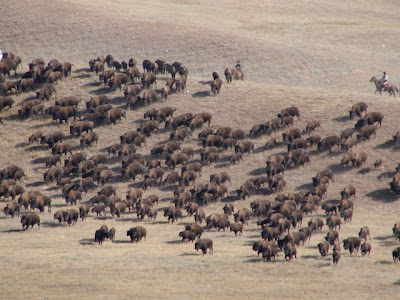 More of the herd coming over the hillside 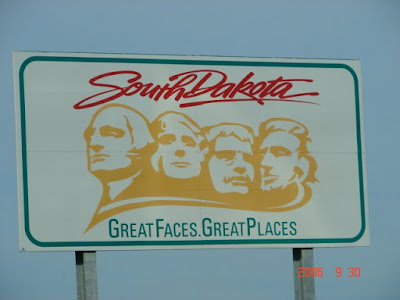 I do love your shadows here. I also wanted to say what a good granddad you are and how lucky/blessed your grandchildren are to have you!

Oh, but what a grand thing to get to watch....
Awesome photos, btw.
VERY awesome.

We have a buffalo farm just outside of town, it's so bittersweet seeing them in a captive state...my imagination always takes hold every time I drive by, just wishing for their freedom. Such is our world these days, nothing is free...My only Grandbaby, Jerid just turned 22, they a just a blessing. It's amazing how they change your world!

Have a great Sunday!
s


Your choice of shadows:
Stony Shadows
Deluge of darkness

Amazing pictures! In a few weeks I will be a grandparent for the first time. :)

Love the shadows; but the post is terrific!
Wonderful shots of memories made.

My third Grandchild is on the way. I'll have three under five. A part of life I didn't expect to be so wonderful.
Loved your answer in your profile to naming a band. :)

I just want to say, too, what a great granddad you are and how blessed your grandchildren are to have you!! Love your shadow shots! The buffaloes are fantastic! What a great post for the day! Hope you have a wonderful week! And thank you for your visit/comment! Always appreciated!

Joe - these are amazing shots. I've never seen the "buffalo roam" except in movies. There is a very powerful sense of history and spirituality in these shots. I appreciate them a lot. Thanks.

All the love to you and yours,
Pagan SPhinx

Oh. My. Gosh! Those are incredible! It's like going back in time. They almost seem to be dancing when they are running.
I may have to put this on my "in my next decade' list!

Hello there !
Thank you for dropping by my blog : )
This event must have been amazing to see in person .. the photos are so striking that being there in real time and event , well it had to be stunning indeed !
To think that these animals were nearly in the brink of oblivion at one time.
You sound totally smitten as a grandad .. that is so nice : )
Your grandkids are very lucky !
Joy
PS .. Yes .. some days are just like that ;-)

They are indeed wonderful pictures. Although I've seen many things (including a herd of musk-oxen in Vermont) I've never seen a buffalo. Your little Anna has been a very lucky grandchild.

That must have been a wild experience to witness the buffalo stampede! These are fantastic photos. I've not been lucky enough to see a real buffalo, so these are a real treat to see! Have yourself a great week!

Thank you all for the many fine comments and for coming over to take a look. Much appreciated.

amazing shots! and I too think you must be a brilliant grandpa

Fabulous photos. What a wonderful event.