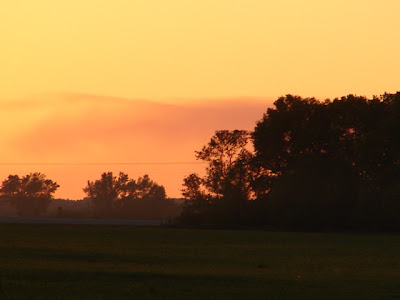 Another sunrise, a new day, another chance at it.

Today is another one of those anniversary days. I usually don’t give these kinds of days much thought until I’m feeling strange, then I remember, “Oh, today is...”. Well, today marks the 42nd anniversary of the day I was drafted into the United States Army. April 12, 1968. That’s a lifetime ago, isn’t it? Yet my body and mind remembers.

I wrote down some memories of this day a while ago. I’ll share excerpts of that writing today. Hope you don’t mind. It’s really all I have left besides a little dignity. I’m not down about it and it doesn’t conjure up all sorts of bad things or anything like that. It’s just the day I reported for military service. Here’s some of what I wrote a few years ago.

I was inducted in April of 1968. April 12th. The first in a series of dates and times of year that turn my life inside out every time they show up on the calendar. My health suffers. My stress level soars. I tremble and live on the edge. I didn’t know that was why until many many years later, but I know now why, around this date, I feel like crap. April 12th, 1968. I say it and I want it back. I can’t help but wonder how I’d handle it today.

I remember taking a bus, actually the same bus route we used going to high school when I was taking the bus to school, before I had a car. In those days, you rode the city bus to school for a quarter. That was the student fare. It was the regular Madison St. bus that went from my neighborhood in Melrose Park, past the Forest Park Armed Forces Induction office, and on into Chicago and downtown. This day, I got off in Forest Park.

There, we were given breakfast by a very nice bunch of old ladies. They weren’t really old, I was 18, everyone who was an adult was old. Moms, I’m sure, of other soldiers, or wives and widows, of Veterans, making sure we were well fed and sent off to war properly. I want to believe that they were crying for us on the inside. I want to believe they knew what fate lie ahead for us all. I still had no idea. I still have this shame for not knowing, not realizing, being so dumb, so out-of-touch with the gravity of it all.

I am jealous of those who actually thought about it beforehand and decided to go to college or dodge the draft all together by going to Canada. Even those who got married and fathered children, either on purpose or accidentally, knew more than I. Can I find peace? Can I get rid of the shame? Will I ever heal?

From Forest park, we got on a bus which took us to downtown Chicago and the huge draft induction facility. I think this was on Jackson Blvd. We got off the bus and got in line. A long day of lines and of doctors prodding, and a lot of time spent in your briefs standing around with a bunch of other guys in their briefs. All as natural as can be, all in order, all just the way it would become as the way the Army does things.

The day went on into night and by 3 or 4 o’clock in the morning on the 13th of April, we landed in Shreveport Louisiana. It was my first airplane ride. I don’t remember a thing about it. We were given a pill as soon as we got off the bus. We were told this was salt peter and it was to inhibit us from wanting to get laid. I wish I could remember if the Army had anything around to stimulate wanting to get laid that they needed to supress. I don’t know what it was really, probably was salt peter, or maybe just salt as the heat and humidity of the Louisiana swampland evaporated our nutrients and the Army, in all their wisdom, replaced our sodium level with a pill. By the way, saltpeter doesn't inhibit an erection. Being away from home and women does.

We had been up since early the day before. I think I might have dozed off a few minutes here or there but I don’t remember. All I do remember is that we had been treated politely up until that point. After arriving in Shreveport and getting on another bus, we were broken down to the lowest common denominator. Stripped of self esteem. Stripped of values. Stripped of our souls. Stripped of our clothes and hair and given a uniform to wear and a haircut that matched everyone else.

From that moment on, I can remember only a handful of nights when I have slept all the way through without the help of drugs, alcohol or exhaustion. Was the Army that smart to be teaching us and helping us to get used to the fact that we would not have one peaceful night after they send us to Nam?

Proof positive, here I am, it's four fucking AM and I'm wide awake. I read this and remember vividly standing out in front of this building, in a light rain, sweating profusely. It was muggy, even in April, and the months ahead would be brutal as far as muggy humid weather would be concerned. I was from Chicago, and weather there in summer is certainly hot and humid, but not like Louisiana.

We would sweat. The sweat made me feel wet and slimy. The sweat would dry and leave the salt of our own bodies in the pores of our skin to crystalize. It felt like needles pricking my back when the skin dried to the touch. We took showers at night, and the towels we used and hung over the ends of our bunk beds were wetter in the morning than they were when we hung them up to dry.

I walked, marched, for hours every day. I got up early and exercised. I lost a lot of weight and took six inches off my midsection. I made muscle. I took care of my own affairs as an individual, things like laundry and handling money, for the first time in my life. I grew up, so to speak, and learned how to kill people, with a rifle, aiming at them and shooting them down, and with my hands, in hand-to-hand combat training exercises using pugel sticks, but being told we’d be using our rifles if this were to be the case in a real combat situation.

After almost five full months in Fort Polk, Louisiana, I came home for a two week furlough. My folks, being empty nesters, moved to a smaller home, an apartment actually, and I felt very out of place, like a fish out of water. The restlessness started back then. The feeling that I needed to get out of a place in time.

Not much of a concern today, I guess, these memories. Not good ones though, like the memories I’ve had recently when my cousin sent me some pictures from 1958, ten years before I got drafted. I rekindled a relationship with my cousin when I saw her for the first time in 38 years at my Mom’s funeral. She sent these pictures of a much more cheerful contented time in my life.

So, today I’ll post a couple of pictures of my family. The black and whites were taken in May of 1858, over 50 years ago, the other is from Fort Carson, Colorado and taken in September of 1968. Private Spado, in front of my bunk in the barracks. Looks like I haven’t changed a bit! 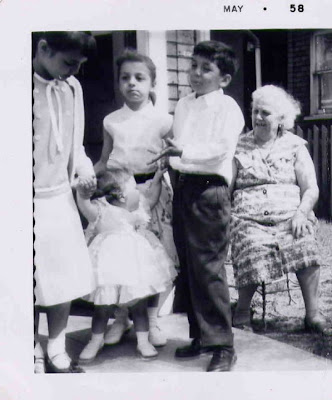 That's me, with the hand gesture, with my cousins and Grandma Spado, my Dad's Mom. In Chicago, May of 1958 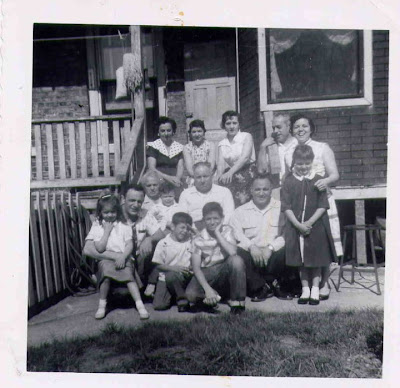 This is the entire Spado family, (except for my aunt who is probably taking the picture). All my aunts, uncles, cousins, my Mom and Dad and Grandma and Grandpa Spado. Taken on the back porch of my Aunt's house in Chicago, May of 1958 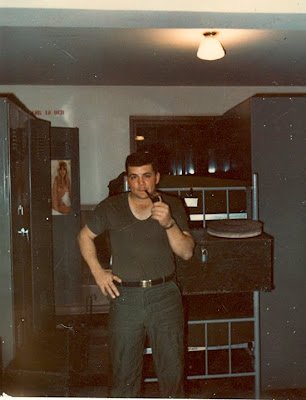 Taken at Fort Carson, Colorado in Sept. 1968, soon after basic training. I stayed in Fort Carson for five months before being sent to the American war in Vietnam 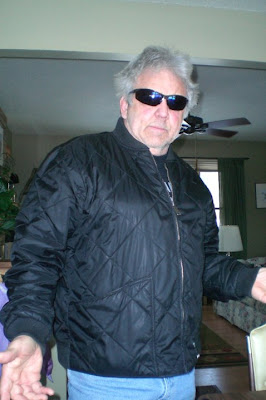 heh...I don't know if 'Happy Anniversary' is appropriate...but anyway...congrats on still being around! Takes one to know one!

Hey Brother, to me, Happy Anniversary is like Semper Fi is to a Marine. I think I'm lucky not to have gotten the pink one.
Thanks for the greeting.

love that picture of the whole family

and the writing is fascinating - thank you so much for sharing

Same comment, different venue...
I LOVE THIS, JOE!! You're my hero.

I echo the joy in being around to celebrate. And given that you know what you know today and you do what you do today, I'd say it's a very good thing.

And what cool photos to have.
I have none of my childhood--which makes me very glad for those that do.

Very cool shoes. LOL And the Nana--definitely looks like she's the Nana! ;-)

Thanks for stopping by folks. I really appreciate my friends on a day like this. I got through it with your help and consideration.

A peaceful Thank You to all.

There are some moments in time that are always present.
They have shaped us, and made us into who we are becoming...
this was a very long look into who you are... thank you for sharing..

I'm glad you made it through and I'm glad you're still with us having time enough left to put all the experiences in order. You are a very fine man, husband, grandfather and friend. It was a path you walked with bravery and honor. The Buddhists say we have all lived multitudes of times and there's nothing we haven't done or experienced. Making peace with ourselves is difficult but is the only worthy task.

I can't believe we still send young men and women off to kill after the knowledge of what it means came back with the vietnam vets.
But also, it's such a credit to you and so many who came back and managed to overcome the awful experiences - I understand that it's not something you'd ever fully recover from but to be able to be a kind, thoughtful and sensitive person like you after such a battering is a testament to the positive side of being human.
Respect 'Man dear, and hugs and peace.