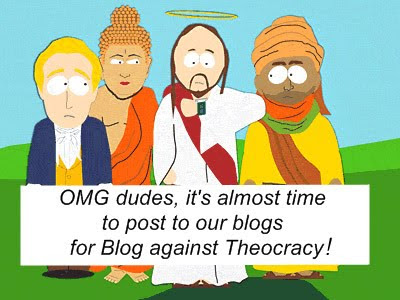 Theocracy in America is on the rise. Many want to use a model of Theocracy as a focal point in how America was founded and how it should be run. This weekend is the Blog Against Theocracy and I want to join in as I firmly believe in the separation of Church and State as described in our Constitution. This statement, and the South Park Jesus logo above, are from Tengrain, of Mock, Paper, Scissors. It is a simple declaration and I'll quote it here:

The theme [of the blogswarm], like always, is the Separation of Church and State — we are for it. But the variations on the theme are many...This is not a bashing of religion - peeps can believe what they choose, however they choose — but it is a reminder that the Government should keep out of religion, and Religion should keep out of the government.

This, and further information, along with many sites and articles referencing pro and con views of the subject, can be found HERE at the Blog Against Theocracy.

For me, I was inspired by my eldest Grand daughter just a day or two ago. In an interesting question and answer session in the early morning, my oldest Grand daughter asked me a few questions. The day this happened was Thursday, April 1, 2010. This particular weekday had something special that was going to happen. She was getting out of school at noon, and the next day, Friday, was a day off from school.

She asked me why they were having a half day and then a full day off of school. I told her that it was for Easter, and that Friday was Good Friday. Then the questions started in earnest.

“What is Good Friday?” She asked.

I told her what Good Friday represents. I was brought up as a Catholic and knew what they say about such things. I answered, “It is said that the death of Jesus Christ on the cross happened on the Friday before Easter Sunday, and it is called Good Friday.”

“Wow, wasn’t very good then, was it?” She responded in her best Monty Pythonesque voice, then went on to ask another question. “Why do we get religious days off of school? It’s suppose to be a public school, right?” (Ahhh the innocent vision of youth)

“Well, yes, that’s right, it is suppose to be a public school and a separation of church and state, but I guess the majority of students are Christian, so most of them would never complain about it, besides, most of the teachers are Christian too, I would imagine.” I answered.

This went on for a while and we discussed the idea of a truly separated church and state and how it is a masquerade at times in this country. I went on to explain Christmas and the long break from school surrounding that holiday. I also told the youngun’ that here in Wisconsin, they used to give days off for a multitude of special interests.

For example, the week deer season opens was off of school, as was the fishing opener. Then there was harvest time. Pop needed the kids home to help get the corn in. So, having a religious day off was no big deal to most people.

But on the serious side of things, I believe that because there are so many professed Christians, and the Christian values are so readily acceptable, (but not practiced by most except for an hour on Sunday morning, or Saturday night and you’re Catholic, so you can go out, get drunk, and sleep it off on Sunday morning), no one cares about the separation. They just want the day off. After all, the banks are open, the Post Office is open, Doctors and Dentists are busy and barbers are cutting hair! I tend to not mind the Good Friday and Christmas days that appease the majority. It’s not like they are making non-Christians do anything, they just are giving days off.

The real problem begins when the government gets involved and wants to use some religious philosophy or doctrine as part of the governance. No one, in a country that is said to be free, should have to do or say anything at any time, that would be religious faith based, for any reason. In fact, I get a kick out of all the Veterans groups that are offended when citizens not want money spent on religious decorations for City Hall around Christmas, then they go on to tout the fact that as Veterans, they fought so we could be free. Not so free when you are told to sit down, shut up and accept Christianity and that it is un-American to be against Christmas decorations. 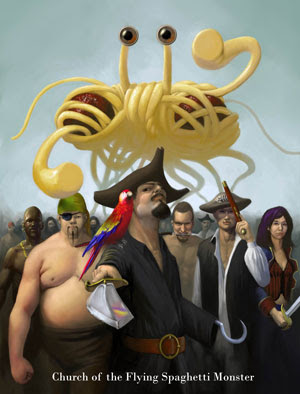 This painting is by Pastafarian Milek from the Flying Spaghetti Monster website. I use it as my logo. As a Pirate in a former life, I insist that we can have our God, as we understand God to be, and not have your God forced down our throats! I'm willing to swashbuckle for that right!

Decorations are a starting point. It is the likes of people like Jerry Falwell Jr. who want to turn a tax exempt school, Liberty U., at Lynchburg, VA, into a partisan political machine. Or the Kansas School Board who wants to force the teachings of the bible, as in Intelligent Design, onto students. The Flying Spaghetti Monster had something to say about that!

When President George W. Bush told the world that he is attacking Iraq because he was told to by God, I wondered what God he was listening to. In Texas, the school text book controversy, is the attempt to force students to read about how we’re a Christian Nation, and puts down as fact that God created the world. I guess if you believe this, and maybe a majority of Texans do, it’s okay with you to tell the children. But if you are of a different mind on this theory and you have no chance to discuss another theory’s existence, then our freedom is lost.

It's in our Constitution. Keep forced religion and religious views out of our lives. True freedom is not having anything shoved down our throats and forced upon any man, woman or child. It is not only an American freedom, it is a human freedom. I’m one of those Veterans who answered the call and went to fight. If what they are telling me is true, that I fought for freedom, then let it be so. Let all people be truly free. End any movement towards Theocracy in America and the world.

For more information, see THIS SITE of the Americans United for Separation of Church and State.

Freedom equals Peace.
Posted by Spadoman at 3:51 AM

Separation of church and state has been total in France for 105 years, whereas in largely pagan (and heathen) England there has been no such separation, so that the Queen is head of the church and C of E bishops still sit in the House of Lords (= US Senate), which to my mind is all wrong, particularly with the newish elements of e.g. Islam clamouring for an attention which may translate itself into governmental representation.

We may have bishops in the House of Lords, but the House of Lords has very little power nowadays. And we are just not a religious society.
George Bush was a manipulative man and was manipulated. His words remind me of the scaremongering during the Middle ages, when religion was used to control the people. To maintain power for the few by frightening the rest with hell and damnation if they didn't do as they were told by the few.
It strikes me that America is a country running scared of some unknown 'them' that they are whipped up into a frenzy about and then buy into God will save them.
The enemy has taken on such huge proportions in the imagination of the frightened that religion is being sold as the only way.
Cause we have lived for years with the unrest in Northern Ireland we understand the us and them. And as a nation we just go for apathy and then rage.

Christopher and Fire Byrd... Thank you for stopping by at my Round Circle and thank you for your comments.

Upon further reflection about the USA, I guess we started this country's church and state dance party when we became an independent nation. They never should have used the bible to swear in George Washington. That would have aleviated the problems right from the get go.

As I lovingly chide the Brit--it took England THOUSANDS of years to screw up England...it's only taken us a few hundred......so pffffffttt!

The girl flunked 'Religions' class in college. Twice. In High School she had some difficulties in World History cuz.... Cuz she has a mom who says 'question everything' and she did?

She passed the World History class--but not without the mom visiting with the teacher more than once.

Ah, Spadoman, this is one of the reasons I miss blogging...themes like this and responses such as yours...

“Wow, wasn’t very good then, was it?” Your granddaughter is very wise indeed...I only wish more of our children were raised to ask intelligent questions.

It's an uneasy arrangement at best when church and state share government.
I agree with you they should be kept separate. And it seems to me that Jesus did too - "give unto Caesar... etc" But perhaps I've understood that wrong.

Decorations, indeed, along with all the damn religious music pouring out from the ceilings and walls of every store and elevator in the whole country for months. Horribly intrusive, and if you complain you are viewed as a terrible person.

More than once I've been alone in an elevator with the umptigazillionth rendition of Little Drummer Boy and beaten the speaker until it broke. One of these days I'll probably get arrested, but it will have been worth it. Not that I'm advocation anyone else do such a thing....

Just getting over to read your entry (and I see I have a bunch of other posts afterward to catch up with!). Great post and I agree completely.

Your granddaughter is very smart and she is right. One thing I was glad about was that many schools now also give off Jewish holidays - but only if there are a lot of Jewish families in town. In the work place, anyone wanting to celebrate their religious holiday if it isn't a Christian holiday, have to use their personal days. But the whole company gets off Christmas. Things are still very inequitable.