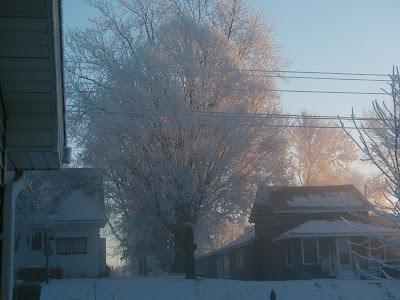 I was up by the big lake a couple of days ago. The Great Lake Superior. I didn't realize how much I miss living up near the lake, the energy, I can feel it. My body dances inside when i am near it. I did my usual water run to Solon Springs and added a side trip that took me North into Superior, WI. I met a guy there who bought a pair of snowshoes from me. I probably wouldn't have driven up there just to deliver the snowshoes, after all, it's around 150 miles one way from River Falls to Superior. But since I needed to fill the water jugs at the spring, and Solon Springs is just a mere 34 miles from Superior, I made the trip fruitful and delivered the cargo. That put a few bucks in my pocket and paid for my gas. I took the Ford Focus. With the manual shift, that thing gets me close to 40 mpg! 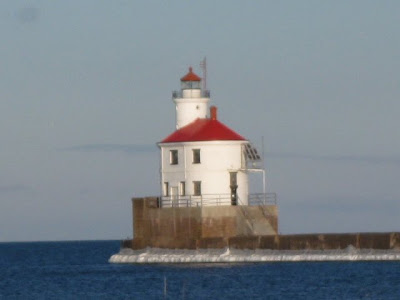 I have sold five pair of snowshoes since last Thursday. I am out of stock. I don't have any more frames, bindings or anything left. Unless I get a specific order for a pair of snowshoes that I can sell for full boat retail, then I am done making them, at least for this year, but probably done for good. There are so many cheaper serviceable snowshoes out there with space age materials. People just don't go for the tried and true wooden frame relics of the past any more. I accept that. It was a good run. I'm glad I sold out. I was getting kind of tired of seeing them hanging along the wall in the garage. I suppose, looking back, I have made almost 100 pair of snowshoes since I started back in the late 1980's. 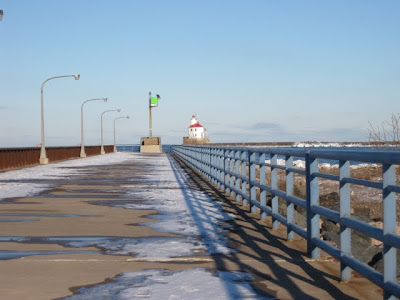 Leaving later in the morning, the sun was high in the sky. At least as high as it gets this time of year up North. There was still some hoarfrost on many of the trees and bushes in the shady areas. patches of fog also held the frost tightly to the tree limbs. At the well, the ice had built up and I actually had to bend way over and reach in to a small pit to fill my jugs with the fresh cold spring water. I did so. I took a sled and loaded the bottles, two at a time, and slid them to the back end of the car to be loaded into the trunk. I brought back 40 gallons of pure water for drinking, coffee making and mixing frozen fruit juice. I had to store them in the house as in Winter, they would freeze in the garage, their usual place of storage. There are 5 gallon jugs all over the kitchen, and a bunch of gallon jugs of water downstairs in the refrigerator.

I was to meet the guy in Superior on the East end of town. That's the direction I would be coming from. We exchanged cell phone numbers for communication. He answered an ad I put on Craigslist for the snowshoes. I got to Superior well before we were to meet, so I took advantage of the sunshine, and warmth thereof, and drove on Moccasin Mike Road to Wisconsin Point, the far Western end of the Great Lake Superior where the St. Louis River empties into the lake. There is a channel there, complete with lighthouse. Not much shipping through this channel as Duluth, the larger city just North in Minnesota gets all the business. 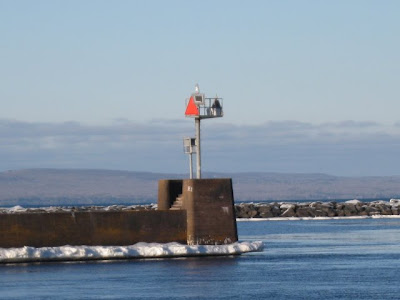 The story goes that Superior was the natural entrance to the big lake. People in Duluth dredged a deep channel to support the large ore boats against the orders of the government and that’s how they became the larger and more important, by commerce standards, city at the Western edge of Lake Superior. To me, it makes no difference. That lake is so grand, it matters not where you stand and look at it. From the high bluffs on the Northern shore above Duluth or from the swampy flats along the South shore. It is magnificent.

Along Moccasin Mike Road, I stopped and looked at shadows of trees and watched birds, crows mostly, but some gulls as well, flying around. People out on the ice, fishing, on Allouez Bay. I made it to the end of the road and walked around on the pier. I was alone there. On a Summer day, there would be much more traffic. Today, in the dead of Winter, I was alone, and it was good. 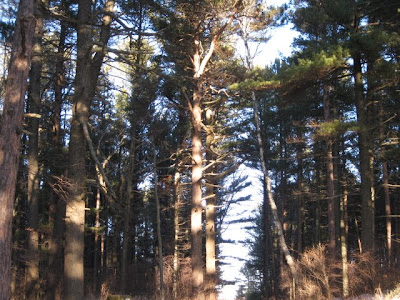 Winter sun, low in the sky, casting shadows on the pines.

I was surprised that there wasn’t much ice. None, really. A few slabs floating along in the channel. Funny how they flow out of Lake Superior at Wisconsin Point as the St. Louis River flows into Lake Superior at Duluth, making sort of a loop. It was clear as a bell with the sunshine. The air was crisp. It was cold, about 25 degrees, but fresh, and the sun was warm to the touch. Never touched the sun? I have. I touch the light and feel its power. When the water and the sun meet at this great lake, there is an energy like no other. I wish I could describe the feeling. I wish I could share it with you. I took a few pictures, but I know they do not do the day, the weather the place or the time justice. 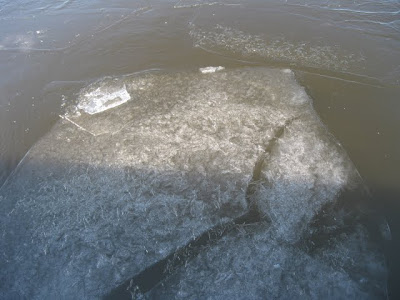 I made my connection, delivered the snowshoes and took off , headed South, along Wisconsin Highway 35. I made it home in three hours and was welcomed by a large bowl of steaming hot vegetable soup. I slept good that night. And I vow to get back along the lake soon. 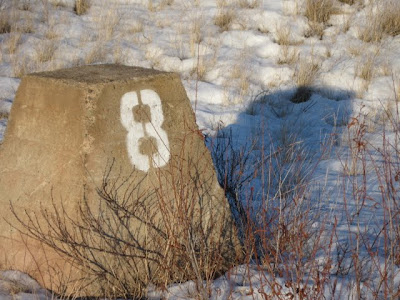 Long shadows. A cement parking marker at the sand dunes, Lake Superior
Posted by Spadoman at 6:02 AM

Oh, what a wonderful adventure.

Ya know, there's crafts I just don't do anymore. Might for the girl, if she asks nicely....LOL..but it's just waned in the list of 'things to do'. I figure that's okay. Plenty of adventures on the dirtroads--and no supplies required!

the light must be amazing

I remember that Lake Superior was great to see from its far northern shore too - the one in Canada. It was a very long way from Toronto so I only ever did visit it once in a summer long ago but it's magnificent.. almost an ocean.

In a way I'm kind of sad to hear you've given up making snow shoes but it's also not very likely I'd be a customer either so I won't complain. I have seen your photographs of them and they are very much nicer than any manufactured of modern materials. Even if you don't change your mind and make more you can always be proud that you made something the way it was supposed to be done. I'm sure your few lucky customers are very happy to have something so unique and beautiful.