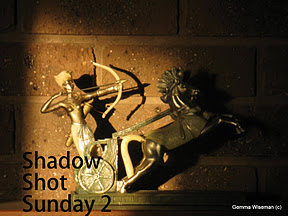 Shadow Shot Sunday 2 is graciously hosted by Magical Mystical Teacher, Rose (Clubskulit) and Gemma Wiseman. The original Shadow Shot Sunday meme had a long running from its inception and a very large following. When Tracy of Hey Harriet’s Photography decided to call it quits, these three stepped up and came up with a plan to keep it going. I’m glad they did. Join in on the fun, or just drop by to see the great Shadow Shots. Visit Shadow Shot Sunday 2 for all the details. 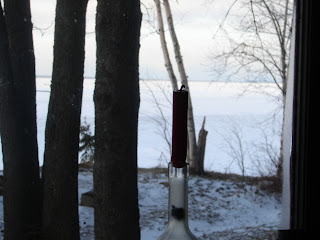 This photo was taken with a Nikon point and shoot camera probably about 2006. It is in the color mode and not doctored, yet it almost can be perceived as a black and white photograph. Some days are like that along the Big Lake. The sky casts a grey pall and the ice reflects that. The trees are barren of green and sit in the shadows
We lived along the shores of the Great Lake Superior and our view out this North facing window was literally 50 feet from the shoreline. I remember the day I took this picture. I had the camera and was shuffling about the cabin snapping this or that. The whole series of photos from that day included rocks on windowsills, pictures hanging on the walls, sticks and wood laid out in Zen gardens and even some of the fire burning hotly in the wood stove. (See below)
I had put the candle in an empty bottle the evening before. We used candle light a lot and still do to some extent. I didn’t realize until I was looking through the files of old photos that the shadowed south sides of the trees and the candle itself looked similar. Wish I could take credit for the field of vision and focus parameters of the trees being much farther from the lens than the candle in the bottle and both taking on the same form .
What intrigued me though, was that rotting stump that hangs over the water’s edge and how it looks like it very well could be the shadow of the candle and burning wick.
So, the title speaks for itself. 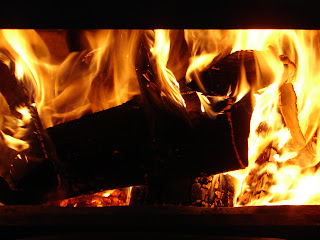 Well hello dear Joe : )
I hope you are feeling well ?
It is amazing how we can take pictures by instinct some how I swear ! .. and later see how many components are far more complimentry than we originally thought ?
That is too perfect to have the stump look so much like the candle .. now how funny is that?
I have taken many pictures that appear black and white but are not. The lighting has to be exactly right to have a picture turn out that way yet we don't look for those circumstances .. they just happen .. like life ?
I love that cozy fire in the stove .. I would be there all day roasting marshmallows ! LOL
Joy

I so miss having wood for heat! Your fire photos warmed my heart!

I say you can take credit because intuitively, your mind saw it. You just were not aware of it! It is a cool shot the way the candlestick echos the tree stump. Until you pointed it out, I had no idea that it was shot from inside looking out! And I like the monochromatic effect.

what fun to go back and find shadow shots!! nice shot!!

I'm mesmerized by the fire. But I'm kinda like that. (and the pot sitting atop...LOL...of course!)

I'm now going to have to go back a few and have a look at some photos taken wayyyyyyyy back.
Actually, at some point I oughta scan 'em in. LOL That point is NOT today!
Just sayin'......

Very cool you caught that in your shot!
That fire shot in the second one...nice.
Have a good week ahead.

That first shot does almost appear to be B&W. Very nice!

I don't know why we don't use candle light more. I've got zillions of them and never light them.

Glad to have you back visiting my blog. You are one of my favorite commenters!

I enjoy the fire scene the most. I just love the dancing flames, so ephemeral and so beautiful.

A gentle scene in the first photo and the light of candle and fire are simply enchanting!

And thank you so much for your wonderful comments recently on my blog! I have so appreciated them - especially the offer of the bike ride! (I was almost in tears about that one but still smiling!) Have a wonderful week ahead!

JOe-- Awesome pics-and Thanks for the visit my new friend! I've seen your comments for years and apologize for not visiting sooner! It was definitely my Loss!

The NOAA site tells me it's 59 here this afternoon. I call it *fake spring*... in the middle of winter, we get some great sunny weather.

Did about a 5 mile bike ride on the river trail yesterday-- I can bike ride a lot further & easier than I can walk on my new knee.

Still a little bit much on the most recent post op wrist, but I wear a compression glove & splint to protect it & I can ride one handed sometimes, to ease up on it as well.

Just makes me feel like I am getting my life back.
Sadly learned a long lost friend, the midwife who helped birth both my kids had a major car accident. Broke/shattered both legs & was out of commission for 3 months.

Can just now start to walk on one of her legs, still in a wheelchair.

I know lots of tips & tricks from my knee surgeries, so I am helping her w functional stuff.

We also drummed last night & I got her some homeopathic comfrey (knitbone) to help w the healing.

So many aspects to healing!

Your picture of the lake through the trees really is remarkable on a number of levels. Somehow though, this evening with the rain pouring down outside, I'm rather drawn to the fire and your offer of a cup of coffee.