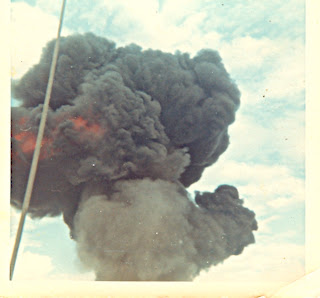 It was Easter, any year between when I was born in 1949 and 1963 or so, and we colored eggs. We used the old method back then. Hard boiled the eggs, let them cool. We filled coffee cups with a mixture of vinegar and warm water and made designs on the eggs with wax crayons. A small dye tablet, each a different color, was put into each cup of the mixture and the eggs were dipped in and held there for a few moments. The longer we held the egg in the vinegar solution, the deeper and darker the chosen color became.
Near the end of the exercise, we mixed the colors all together and did a special egg. It turned dark greenish brown and looked like the olive drab of an army uniform. This was always designated as Dad’s egg because he was in the army during WWII.
I have seen the pictures and heard a few stories about life in our household before I was born. My sister and brother were born in 1942 and 1943 respectively. Dad got drafted in 1943 and was on a troop ship in San Francisco in 1945 when Japan surrendered and the war ended. They let him off the boat and sent him home with his military commitment complete as be had children at home.

The only significance in my mind of mentioning the story about my dad having served in the US armed forces is that he was drafted and did his duty when called. I did too when I was drafted in 1968.

So far, it all sounds like a big adventure - the mood changes after this I'll bet.

It seems crazy to send 18/19 year olds off to fight. Despite the fact that kids feel invincible at that age, they are not.

how can i top jeannie's comment?
except to thank you for writing straight from your heart with such genuine candor. i haven't shared with you that my mother painstakingly gathered all the letters my father wrote to her/us from vietnam. a letter for every day for a year. they began may 24, 1967. i plan to read them one by when on the same date my father wrote them all those years ago. it is a profound gift, like getting my father back for a year to listen to his stories and deeply caring heart. i love just looking at his handwriting.
i am sure i will think of you so much as i make this intimate journey you too experienced.
i imagine your blog will be just as important to your children and grandchildren. so glad you take the time to share so deeply.

My best wishes to you on your journey to Ft. Carson. Ron was raised in Colorado Springs and after his basic at Ft. Belvoir VA he was assigned there with the Corps of Engineers. Thought we'd spend his time there and we'd be fine. But God had other ideas and they transferred the entire battalion to Ft. Ord, CA. And we've only been "home" to visit since. We do our pilgrimage every year! Enjoy! Cathy

I was absolutely fascinated and read every word of this post, Joe. I'm a little older than you, but those VietNam days are etched in all our hearts. Except--I was a young mom raising kids and didn't know the details like you describe here. I'm so glad you are one of the ones who made it home. I have family in Pueblo and back in those days you describe, it was nothing like you describe--real farm and cattle company. My cousin was a John Deere dealer. Yes, you were (and probably are) handsome--you look a lot like my ex, a fine Sicilian man. Did you marry Judy? I don't visit you enough to know if that's your wife's name.