As I get older, so do the Grandkids. And as they get older, they gain in wisdom And quite frankly, my Grandkids are smart. Maybe smarter than I was at their age. Okay, for sure, they are smarter than I was at their age. But as wise? I dunno.
I am the fortunate one that has a fantastic relationship with these fabulous children. I am so blessed to have them in my life. One of the best parts of our relationship is the time we spend talking to each other. General conversation for the most part, but I do get to learn what they are learning if I pay attention.
Sometimes it’s a school lesson or subject. A project they are working on. Like the time the oldest, Anna, wanted to discuss the American Revolution. Turns out she chooses to side with the French! Another example was when 12 year old DJ needed to tell me the most common first name on earth and did so by asking me if I knew the answer to that particular question.
I remembered from way back that I thought John was the most common first name. DJ immediately told me that it wasn’t John. “It is Mohammed”, he said emphatically.
I countered with, “Well, maybe John is the most common first name in the United States.” I added, “And Joseph, my name, is second.”
I was making this up and hoped I was right. I at least hoped they wouldn’t challenge me as I wasn’t really quite sure. Seems these kids are getting too smart. On DJ’s insistence, we went to the almighty computer and did a search. Sure enough, in the whole of the world, the most common first name is Mohammed. In the United States, James gets the nod.
John is second, and Joseph, my namesake, comes in a lowly ninth. The name Joe, a derivative of Joseph in most cases, is down the list at 51st! Most folks call me Joe or Joey. By the way, Joey comes in at number 307.

Who hasn't heard these phrases; Hey Joe, (Where you goin’ with that gun in your hand?), Cuppa Joe, Morning Joe, Joe Momma, Plain Old Joe, GI Joe, Say it ain’t so, Joe, Joltin' Joe, Joe from Kokomo, Joe this, Joe that, Joe the other. Joe the plumber. Joe the bartender. Joe’s Bar. Joe’s Diner. Joe’s Bar and Grill, Eat at Joe’s. Joe Mauer, Shoeless Joe Jackson, Joe Namath, Joe Montana, Joe Hill.
Cowboy Joe, Joe Millionaire, Joe Blow, Average Joe. Not to mention the use of Joe as a middle name. Billy Joe, Bobby Joe, Randy Joe. There is a town called Joe, North Carolina and a Joey is what they call a baby kangaroo in Australia. And how many more using the shortened version, spelling Joe without the “E” on the end like Mary Jo? Who is Joe Blow anyway?
Why when I was a kid, a fictitious character we all sought to mock was a character we called Joe Matradatz! I mean, if James is so damn popular, why don’t they use his name for coffee? Cuppa Jim, or Jim Matradatz?
Now, in our name controversy, I had the upper hand. As a 12 year old, DJ hadn’t heard of all these references. Then, we looked up his first name, Derek. He came in at 163rd! Click on these handy links for reference and see where your name is. They have girls too, that list is here.
Boys names and Girls names.
I managed to get him to agree that Joe should be up higher since it had such significant press and usage, you know, being a part of the vernacular and all. But the facts didn’t lie. At least I was higher than Derek. By the way, he was named after his Grand Fathers. His Dad’s Dad and his Mom’s Dad. Well, he’d have a name higher up on the list if his Father hadn’t insisted that the Paternal Grandfather's name be used first. DJ stands for Derek Joseph. Had he been named JD, he could have been right up there near the top, sharing honors with his Maternal side. 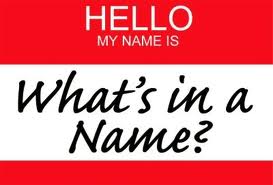 Now, I think I’ll do a search for girls names and see where Josephine comes in. Holy Crap, that one is 121st. Mary gets the number one place. Sorry Anna. You’re at 33, ahead of Derek, but your real name, Arianna is at 2495th.
Where does your name fall in? What were your parents thinking? I remember wanting our first born, if it was a girl, to be Maggie. We used the biblical Margaret, and slanged it to Maggie. Alyssa, our second born, was taken from a book of names. (Must have been smokin’ a little that night). We liked the sound of it. There isn’t a soul that calls her Alyssa. Everyone says Melissa, Poor kid. Mea Culpa.
Our third daughter is Jayne. It had to have that weird spelling as it was to honor someone that my spousal unit thought very highly of. We call her Jane or Jay’-Nee, but spell it with the “Y” in there. By the way, she hates the phrase “Plain Jane”, and her nickname is Binky. Go figure.
There can be no end to the stories behind someone’s name or names of towns. I remember reading a book by author William Least Heat Moon called “Blue Highways”. He circumnavigated the USA and wrote about his exploits, similar to Travels With Charley” by John Steinbeck.
Moon put great emphasis on the unusual names of places. Like Dime Box, TX, Nameless, TN and Remote, OR. Have some fun looking at the names of American cities and towns in this reference.
Another game we played while on the road was to find a name of a town or city and see how many states it is common to. We used the Rand McNally Atlas for this. I think there are 20 Ashlands. We looked that up because we lived in Ashland, WI. Topping this list with 49 is Greenville. That puts a Greenville in almost every state. Guess which state doesn’t have a Greenville. The answer is Right Here.

Playing with names of people, places and things can be a lot of fun. Have some fun of your own and report back. I’m sure there is a story for every name. Smith? Johnson? If your last name is one of these two, you are ranked one and two respectively and encompass over 4,600,000 of the population in the US. My last name is not listed in its current form of Spado, but the original name of Spada is listed and comes in number 14,724th.

I live on Johnson Street. Let me see how common that is. 40th. How about that!

NOTE: This post is the result of a sleepless night and in no way reflects the mindset of the author about his Grandchildren, name, town, street where he lives or ego.

I think Joe is lowish on the list because there aren't so many people naming their kids Joe now - it's an "older" name. It will probably be revived when your grandkids have kids.

I was surprised that my name was 58th. I'm pretty sure it's no where near that popular here in Canada. Most Jeans are in my mother's generation. I've only met about 4 contemporaries in my entire life. And I think we all get called Jeannie.

I have a first name that no one can spell or pronounce [when they see it] they are forever adding in an i to make it a y sound at the end or a c that isn't even there. It is aggravating, but the fact is it isn't a made up name, it just happens to be the french spelling of my name and it isn't spelled phonetically like so many names are so people just dumb down when they try to say, read or spell it.

I tried to name our kids family names [old, established type names] but I am amazed at how many people will ask me to spell [just an example, not my son's name] "Tim".

And our last names? Sigh. It's all good tho' - after all these years it has come to be expected, so we wait for it and then laugh.

I love the relationship you have with your grandkids. I so loved my grandparents and was happy that we spent every Sunday at their farm when I was growing up [5-17]. It really helped make me who I am today. I hope I can be as cool a grandma as you are a grandpa. :)

Have a good night. Hope you sleep well.

My name is now 763rd on the list but it was high up when I was born. One of my favorite things when I had to be on the phone a lot at work was to run into another Susan. I never talked to one I didn't like.

It's great you have such a wonderful time with your grandchildren. I think a lot of kids are smarter faster now is because they have to be. You and I grew up in a slower time and I'm sure we're both glad we did.

I think Joe Blow is John Q. Taxpayer's cousin, :D.
My name came in 11th, which is no surprise...all my life I've been reduced to Lisa D. That's why I renamed myself on blogger.
Very fun post, Joe!
♥♥♥

I will definitely look myself up. You are always a fascinating read. Glad to hear you are well enough to travel.