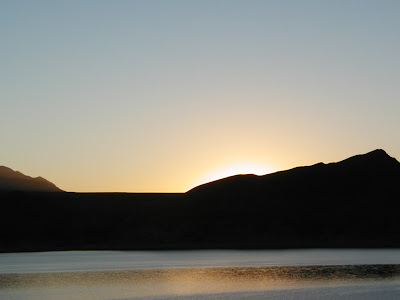 Sunrise over Elephant Butte Lake, (or is it Effalump Butt like Mel says?)

The next day, Saturday, I woke up early as I usually do and read a while. I waited for daylight and wasn’t disappointed with the stream of sunlight that blasted through the motel room window. I rallied, and after a shower, loaded up my camera, some water and a few snacks I had laying around into the rented Hyundai. I stopped at The Black Cat Coffeehouse and Books and filled my travel mug with hot Sumatran and headed out towards Silver City.

My first trips to New Mexico had me staying in and around Silver City way back in the early 1990’s. That’s the first time I saw the Big Ditch, a large canyon that runs through the middle of town. They say the ditch used to be main street, but the torrential rains of summer and the flash flooding washed the town away and left the ditch. Town was then rebuilt along the sides of the ditch. The city has transformed the banks of this crevice into a walkway and public space where art festivals and other celebrations are held. They also say that Billie the Kid's Mother is from Solver City and Billie lived there as a child. 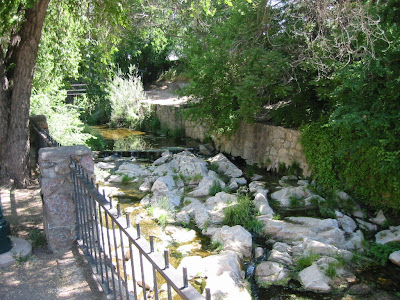 I used to have a place there. I rented a small store front that had some living space in the rear. I made snowshoes there amongst other things. I was in the desert, but sold the snowshoes in places like Taos, Aspen and Vail. I took on projects as they came to me, many of them from word of mouth networking while sitting around drinking coffee at what was once known as the A.I.R. Coffeehouse. The initials stood for Artist In Residence. A woman name Jacqueline moved from Seattle to Silver City to open her dream business, good coffee and art. 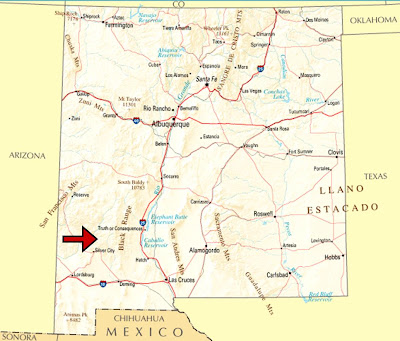 New Mexico showing the area where Silver City is located

A.I.R had been bought and the name changed. Looks to me like the prices must have been raised as well. I had an Americano there and sat alone outside on the raised cement boardwalk which faces east. The bright sun warming up the morning quickly made it quite comfortable to sit there and savor the hot brew. Earlier on, the drive over the Black Range through Hillsboro and Kingston didn’t disappoint me. The twisted climb up and then down and over the pass was phenomenal. I rode this section on my motorcycle three years ago and I will go back and do it again, maybe even this year! I didn't get to the Gila Cliff Dwellings this trip, so I must return and visit this ancient site again. 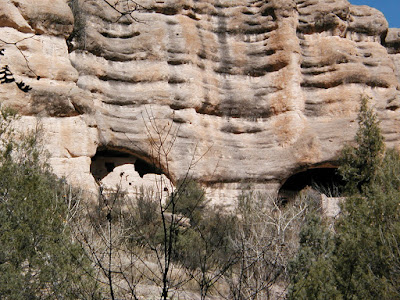 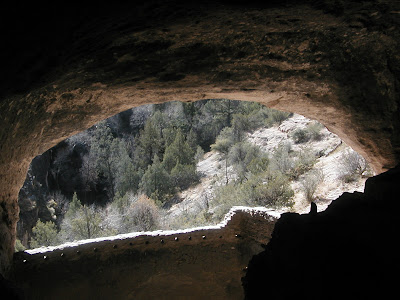 Looking out from deep inside one of the cliff dwellings

I walked around Silver City. I noticed what stores and businesses had changed and closed and what new ones are trying their hand at it. Another small coffee shop on the main drag, Bullard Street, lured me in and I had yet another Americano. Outside this shop, a few vendors were setting up tables. One man had some unique beads and I bought a few for use on the Dream Catchers I make. In talking to him, I find that he is from Duluth, MN and knows a few people I know. We ended up talking for over an hour. We exchanged contact information and will hear from each other in the future I’m sure.

I did trek over to Texas Avenue where I had my shop. The city, and this block in particular, has gone through a metamorphosis of sorts as it was put on the map as a genuine art community. Now, the galleries are notated on a brochure complete with a map of the city. People come from far and wide to view and buy the art, yet the downtown has as many empty buildings as any other small town. Some businesses make it and some don’t. Some artists move there and live and get by, some move on to greener pastures. Seems to be what I’ve seen in my travels through all time, not just during the current announced economic slowdown. 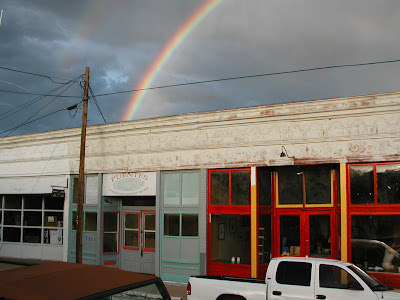 A shot of a rainbow over my old Texas Avenue shop in Silver City, NM sometime in the late 1990's 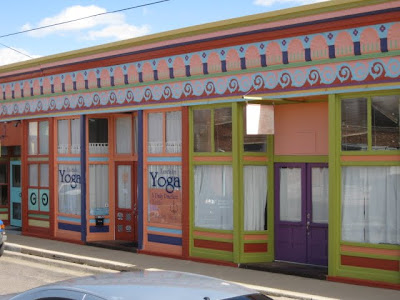 I left Silver City, but not before getting a bagel, toasted, and lathered with cream cheese. This is just what I needed to eat away at the acid from the strong coffee I had consumed. I headed out and drove a familiar route through Santa Clara, a town in the center of the copper mining district of the area. It is so centrally located that the name used be Central. A large open pit mine is there. It is an awesome sight to see the large deep excavation. The tailing hills are miles long. Then I see the ugliness of the mining industry. 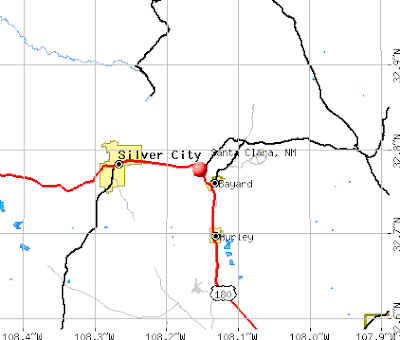 A map of the mining towns of Santa Clara, Bayard and Hurley

This, being a travelogue, is not the place for political and environmental discussion, but it must be brought to the front that there is no doubt we, as human people, are raping our land for profit. Yet the other side of the coin is that the livelihoods for hundreds of workers would end if the mine was closed. What is the trade off? I don’t have the answers, only opinions, and they wouldn’t be met with approval across the board.

The sight that is natural in all this is a rock formation high above the open pit mine at Santa Clara. It is called the Kneeling Nun. From a distance and a certain angle, it looks like a nun in a habit on her knees praying to the face of the large mountaintop of rock. Reminiscent of the rock where Moses received the ten Commandments in the epic movie with Charleton Heston, “The Greatest Story Ever Told”. Should be coming up for a viewing soon, as Easter approaches in less than forty days and forty nights. 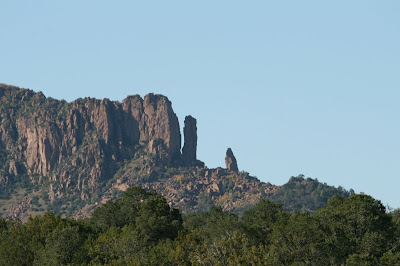 I travel down through Bayard and Hurley and past the now closed and for sale Faywood Hot Springs. Quite a story there. A great place to sit in pools of naturally hot springs flowing to the earth’s surface, right in the middle of the desert. Check out the website for information about Faywood. I would have stopped, but the place is closed now.

I pull into Deming and cruise the loop. I stop at LaFonda, a Mexican restaurant where a waitress there once taught me how to make a great red chile enchilada sauce. The place was packed at two in the afternoon with some wedding party or some dinner celebration. I walked around downtown for a while, then left and took the long straight New Mexico Highway 25 back towards hatch, and then to my motel home.

Back in Truth or Consequences, I went to Hay Oh Kay hot baths and soaked in the healing water. I wanted to get a massage, but the therapists were all booked for the afternoon. Dinner was simple, more grocery store fare as I try to eat sensibly in an effort to control my diabetes. I later learn from the motel manager that he has passes for the Riverbend. The Riverbend is another of the many spa motels that sit in the center of Truth or Consequences. No one has done a better story about The Riverbend Hot Springs than my friend Billie who pens the Border Explorer blog. I’ll link to her blog story posted a short time ago so you can check it out. Riverbend is the name of the spa. This article has some great photos of this place along the Rio Grande in Truth or Consequences, NM. 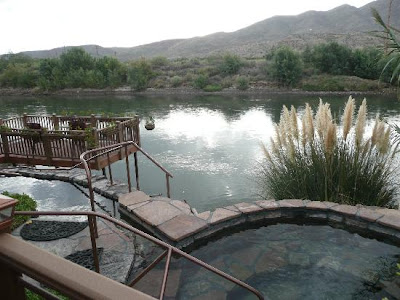 The hot springs at Riverbend

The fact is, T or C used to be called Hot Springs, NM. The name was changed through a PR stunt in 1950 and the people never looked back. The unusual name is known by some, and others always say, “What??!!” when I mention it. Instead of me telling you the story, click on the link above.

(To Be Continued)
My trip to Las Cruces and La Mesilla and traveling home and back to Winter in the Northland.

Great travelogue, Spadoman, really evocative descriptions and photos to match. I think I may have been to Truth or Consequences quite often without actually leaving Europe...

Thanks for the lovely description of Silver City. My husband and I have been here for 10 years now and just love it! I particularly enjoyed the 2 photos of Yankee St. (before and after)-Linda@silvercity-realestate.com

Oh, the buildings are just cuter than cute. And I love the rainbow over the old store.

BUT (go figure) I'm all about the sunrise over Effalump Butt! :-D

So is it fear? that clutches at me in this hollow and strange feeling..
Or perhaps awe? a sense of wonder so long dormant I have forgotten what it feels like...
I wonder..
I have been to silver city, 10 + years ago, ate at a fabulous mexican restaurant, and shopped in some wonderful art Galleries.
I went hiking in the Mogollon homes and in the place, in that space
so many years ago , I met the devil.
his name was John.
here
http://sorrow11.wordpress.com/2008/01/10/the-devils-gifts/
is a post a wrote some time ago about that chance meeting.
And now, in the days of the bear, I am returning to.
I am shed, and lost in thoughts...

Hey Spadoman... Another trip you should consider if you haven't been there before is the 'Catwalk' on the western side of the Gila near Glenwood and Mogollon. Check out this link.

I'm loving your travelogue so much. We have some good friends in Deming and go there often. I really need to get to Silver City. Your photos are great...so is your commentary. Wish you would not hold back on your views. Everything is political, after all. But, in any event--thanks for the kind words and the link to Border Explorer.

The story of your trip as it unfolded is wonderful as are your photographs. You have a great gift in being able to share at a very deep level what you see and what you remember. After reading one of your pieces I really feel as if we've known one another for years and that's a very good thing.

I think that if there was a concerted effort to adjust to new systems of producing clean energy that there really wouldn't be so many people out of work. There is much that needs to be done in every part of the country and that would allow people to stay in the places they love.

A sunrise morning with Sumatra in a bookstore. just about perfect!

I've only been "through" New Mexico...haven't spent any time exploring there.

I'd love to try the Hot Springs.

what at great road trip so far!