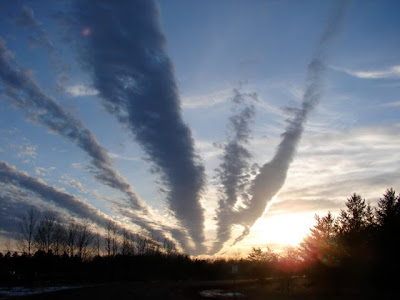 Sunday morning in New Mexico was glorious for me. The sun seems to almost always shine. I was told once that they average 308 days of sunshine per year, yet I have been down there during rainy season, which is July through Labor Day, sort of, and I have seen the flash floods of water pouring through an arroyo and closing off the road. This day in February was bright, sunny and definitely warmer than it was in Wisconsin.

It became breezy and the big white clouds billowed, but that didn’t put a damper on my plans for the day which were to travel from T or C down to Las Cruces and into La Mesilla. I lingered in town a while and had a cup of coffee at the Black Cat. There was a Tarot Card reader that showed up there on weekends and I wanted to say hello to her. She had done a reading for me years ago, and when I saw that she still showed up there, I waited for an ambush.

I remember her being from Minneapolis. When I introduced myself as a Northerner, she smiled and told me that after 12 years, she finally sold her house in Minnesota and lives full time year ‘round in Truth or Consequences. I didn’t get a reading this time. She asked me how the reading from years past turned out. I told her about my craft projects. She had suggested that I was leaning that way about six years ago and that I shouldn’t avoid it.

I left T or C and headed South. I took the side road, the two lane that followed the Rio Grande. I love that road, and on an early lazy Sunday morning, I had it to myself. I passed by Caballo Lake and the small farming towns of Arrey and Derry, Garfield and back into Hatch yet again. Past Hatch, the road carves through grove after grove of pecan trees. I find myself in Las Cruces, and while driving, I get a very pleasant surprise, a call from a blog friend that lives in El Paso in the Winter. We had thought that we might be able to meet for a cup ‘o joe, but her schedule was tight. We talked a while as I drove. It was a nice treat! 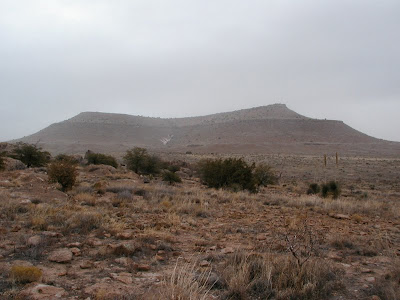 In Las Cruces, I cruised around past antique row. Most of the shops were closed. I didn’t feel much like walking around inside anyway, so I went to La Mesilla. This little town brings you back in time with the old stone buildings and the town square. One square city block with a small gazebo in the center. Around the edges, on Sunday afternoons after church, the vendors set up their tables and sell their goods. Ceramics, cloth, jewelry, artwork, lotions and soaps, pecans and chiles and ironwork on this day. 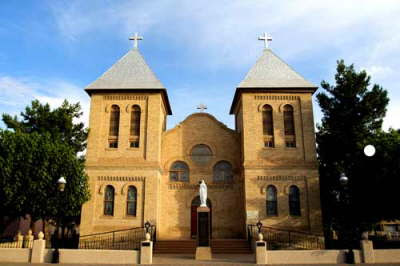 Saint Albino's Catholic Church stands at the end of the block like a tombstone, the town square being the grave. No metaphor here, just the way it seems to be set up. I wandered through the tables and saw a familiar display of small paintings, 5” X 7” paintings of Patron Saints. Each with a description on the back of that Saint, where they hailed from and who they protected. The artist/salesperson was talking to a prospective customer when I walked up.

They had been talking a while, so the vendor turned to me and asked, “What do you do for a living?” 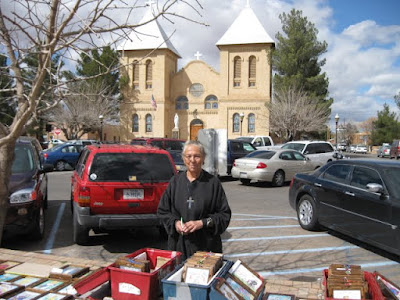 Francesca Garcia, the artist at the town square in La Mesilla, NM 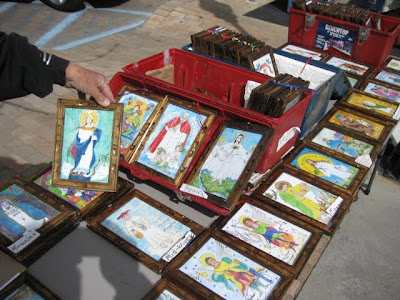 I answered that I no longer work for wages. Her hand swooped down into the piles of prints and she came up with one immediately. She told me that it was the Patron Saint of fathers, (and Grandfathers, of which I am one), and handed it to me. I saw it, then told her that my name is Joseph. She had handed me St. Joseph. That small act broke the ice and I told her that I had been to her table before and purchased a print for my Mother. I also told her that my Mother had passed recently and that her print came back into my possession. We talked a while and found we had other things in common. I bought the St. Joseph print and another one depicting Our Lady of Guadeloupe, the Patron Saint of Latin America. 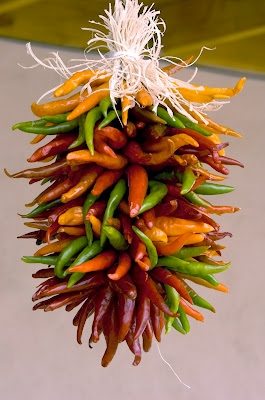 Personally, I like the image. I have many small portraits that I have collected over the years. I bought a print from my newest friend, Francesca Garcia. When I told her I collected Guadeloupe portraits, she took my address and told me she would send me a special one she had. She did, and packed the envelope with colorful macaw feathers. These things were sent as gifts. I will make her a special dream catcher and send it to her to say Thank You.

The stores and restaurants around the square are colorful and plentiful. There are art galleries scattered throughout the little village, right next to the junk stores like Billy The Kid, a store that anchors the corner of the square at the opposite end of the church. But that Billy The Kid souvenir shop has a small beverage counter at one end and I spotted a small coffee roaster there years ago. I treated myself to a freshly brewed cup of coffee and savored it outside on a park bench along the square. I watched the tourists bargain at the tables, then left and headed back up to T or C. 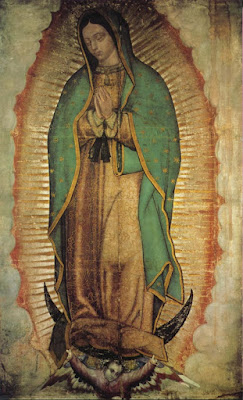 Portrait of Our Lady of Guadelupe

There is certainly more to do in that part of New Mexico. I barely scratched the surface. Numerous wildlife refuges along the Rio Grande, the Jornado de Muertos, The Journey of Death trail is just East of the Rio Grande and passes the White Sands Missile Range, the new Spaceport that is being built, said to be like an airport for the public for space travel and the VLA, Very Large Array of radio telescopes with their visitor center and fabulous photographs of outer space just East of Socorro. Not to mention more small restaurants, diners, art galleries, second hand stores and coffee shops! But my trip was done for this time. I headed back to the Desert View. 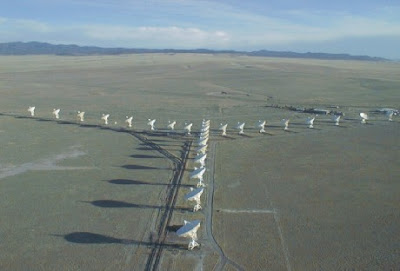 VLA, Very Large Array of radio telescopes east of Socorro on US Highway 60 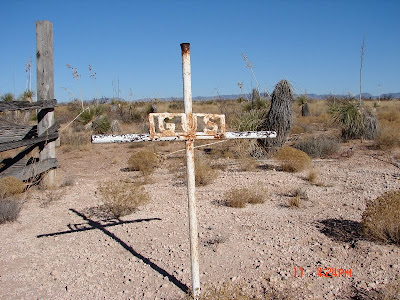 A grave marker along the Journey of Death, I'm thinking Gus was a mule, how about you?

Back at the motel, I organized for the trip home that I would take the next day, then I went for another soak in the healing waters of the hot springs. This time, I went to Riverbend and I was not disappointed. Once again, if you haven’t read about Riverbend, go HERE and do so now. Border Explorer does a great job and posted some great pictures of this fabulous spa.

My last supper was at La Pinata, a small family owned Mexican restaurant. I had a platter of Chile Rellenos and went back to the Desert View and watched some TV. Monday morning had me on the road headed North toward the airport at Albuquerque, but not before another stop for good coffee and breakfast in Socorro at the new Manazares Street Coffeehouse. After a bowl of delicious oatmeal fortified with a crunchy granola on the side, I went to Albuquerque and walked along Central Avenue, old US Highway 66, the Mother Road. A colorful place to spend a little time as it was too early to go to the airport.

When I did return my car rental and get a shuttle to the Sunport, I didn’t have long to wait as the lines were short. I checked in and got a great surprise. Seems that the online booking I made didn’t tell me that there was a non stop to Minneapolis from Albuquerque. This non stop flight left only ten minutes later than I originally scheduled, but didn’t have the two hour layover in Salt Lake City. The wonderful person at the counter put me on this flight for an extra fifty bucks. Well worth it from my perspective as the price of an online purchase for non stop was up near $500.00. I was home in a flash early Monday evening, just in time for dinner.

That morning, the sky was cloudy and they even spoke of rain and snow in New Mexico. I saw the clouds, but nothing else and came home to an early Spring warmup here in the Northland. I’m waiting for the change of seasons and planning another trip to New Mexico in Late April, this time on my Triumph Tiger. We’ll see how that shakes out.

I want to say, "Thanks", for sharing my trip with me. I had fun reliving it and giving you the day by day account. March has some home DIY projects on tap to keep me busy along with appointments and commitments, so the time should fly by and snow should melt. I'm already looking forward to the return to New Mexico and points Southwest on the motorcycle.

In the meantime, may you have Peace

This was such a wonderful story of a grand and unplanned trip. I loved the photographs and your conversation with the artist most particularly. I'm glad you made it home both safely and fast and I'll look forward to your next adventures - near or far.

Archimedes gets about - I see he made it to Riverbend!

Thanks for such an entertaining travelogue. You come over as everything an enlightened traveller should be. Looking forward to the next one.

k..that was a deal on the ticket. And an awesome 'remeet' with the vendor. All things happen for reasons, eh?

Very cool.....I could get lost in that first photo--and stay there....

*happy sigh*
I so need a roadtrip.

Somehow I managed to miss all your road trip posts. Maybe my RSS feed wasn't working.
What a wonderful trip, and how lovely to go back and find the people still there and still selling lovely things that you remembered from other times.

wonderful stories...especially about the painter with the Patron Saints. The print you had given to your mother...which one was it?