Today's post is my contribution for the Art of Remembering. This time of year, around the end of October, just before Los Dias de Los Muertos, or, The Days of the Dead on November 1st and 2nd, the spirits are active and traveling. The spirits of the people of Crow Creek paid me a visit and I needed to remember them today.
More remembrances and similar connectedness can be found at Rebecca's recuerda mi corazon 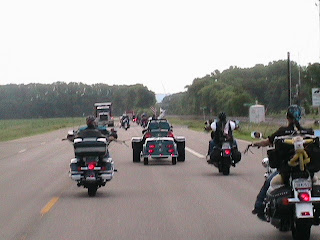 What a dream. I was riding my motorcycle through the summertime breeze with a bunch of friends. Some I knew, some were new friends. We were along the river. The vistas were fantastic. Through woods and prairies, corn and beans, the river flowing at our side throughout the journey. Together, as one, we rode for days. Our stops at night for rest and food were at beautiful wooded campsites. It was hot and muggy, cool and rainy, calm and windy.

When we got to a place in South Dakota, there was a car parked on the side of the road. A man was holding a camera, an arm waved from the front seat, little arms, those of children waved from the rear. Then another car, and another, then a bunch all parked near an old cemetery. All with arms waving as we rode by.

We arrived at an overlook. A prometory with a view of a great river. We gathered there and people spoke. We rode again and after a short distance, two riders on horseback came out in front of us and led us into a grassy circle. The circle was full of teepee lodges with a great fire pit in the center. Over the pit was meat from Tatanka, the bison, hanging and drying. We were along the river once more. Spirits were all around us. Spirits of long ago and spirits of not so distant past. People were around the circle, standing around, some in their cars, some in lawn chairs in the shade of large cottonwood trees.

The mounted riders led us and we lined up one after another in the circle and got off of our iron horses. The people gathered and formed a line and came by each of us and shook our hands, Some were crying. Some hugged us. Some shook our hands holding ours with both of theirs. The children were there as well in great numbers and their shyness made them choosy about who they offered their little hands to.

A man played a small hand drum and sang a song in Dakota language. He told us the words to his song. He told us he wrote this song especially for us. The song sang the praises of a group of riders on iron horses that came to give him hope, give hope to all his people.

An old woman, an elder, sat in a lawn chair. She held a feather of an Eagle upright in her hand. The small children were gathered about her like a magnet would gather paperclips. A younger man held an umbrella over her to shield her from the hot South Dakota Summertime sun. She brushed him aside and got up and she sang and old song. An honor song, for us, the iron horse riders.

She beckoned, and each of us walked up to her one at a time. She sat there. Her eyes ahead, vacant, holding the feather. We put our hand in hers and she prayed, silently. Tears streamed down our cheeks as they have been since we saw the first car along the side of the road.

The people came by and shook our hands again. The children now less choosy, and more were crying, more people grasped our hands with two of theirs.

This was a dream. A dream I lived.

A feeling so incomprehensible. A feeling of pride, honor, struggle, sorrow and peacefulness.

The media vilified the Dakota for their actions and 303 Dakota men were sentenced to death by hanging by a hastily organized United States Military Tribunal. Then President Abraham Lincoln pardoned most of them, but the largest public mass execution occurred in American history with the simultaneous hanging of 38 Dakota warriors at Mankato, Minnesota on December 26, 1862.

The following Spring saw this Nation of people exiled from their homeland in Minnesota when they were forcibly moved by riverboat and rail car to an Indian reservation near Fort Thompson, South Dakota called Crow Creek.

Our motorcycle ride was to remember this event in spite of the history books and a society disinterested in their own brutal past.

After we left the circle we ate a great feast of buffalo and cake, stew, soup, fry bread, lemonade. We talked and made new friends. Some came up again to talk and say thank you. Thank you for remembering us. Thank you for giving us hope.

I told them that I was the one to be thankful. I gave them nothing, they gave me the greatest gift. A smile at the end of my ride. They allowed me to honor them, the survivors, the self determined few. 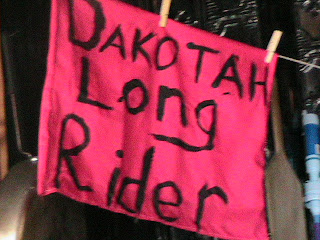 This narrative was written shortly after the First Crow Creek  Commemorative Motorcycle Ride in 2006. I took part in three more for a total of four years.

I chose this story as my Art of Remembering as it brings back some fantastic memories of an event that not many people knew about. I was a part of it. I experienced it and it taught me much. So much sadness and joy all at one time. So many feelings, all gathered together by people of different worlds. Unconditional acceptance of each other without judgement of politics, color, religion or personality.

These are the people I am remembering today.

Hope.
A celebration of what is good in us.
A remembering of bittersweet life moments well lived.
Thank you for sharing this story with us, Man.
Peace to you and to us all.

Oh how I enjoyed going along on your journey...learned so much. Thank you!

What a beautiful post. I too learned quite a bit. Thanks for sharing this story.

What a powerful dream... what a humbling remembering... Thank you to you and all the iron horse riders for keeping the memory alive so that we can learn and never repeat this part of our history and honor all the people of then and now...

Wow! ~ What a dream ~ what a living tribute to beautiful people that this nation did the biggest disservice to ~ may they rise to the top again ~ What an experience for you ~ You are a treasured being ~ Thanks for being you ^_^ ~ (A Creative Harbor)

Lest we forget..... But as you pointed out, it's a memory that attempts to be erased for others.

I'm glad there's you to keep it alive.

What you weave by way of words is always illuminating and heartfelt. History books leave out a lot of important information and never is a holistic POV. How the Hawaiian islands became a territory is not really told in a very straightforward manner in the history books too. However, at least it did not contain the bloodshed a mass executions of the Crow. It is sad to see the side of 'humanity' that is not very human.

We have too many dark moments in our history, thank you for sharing this piece of forgotten history and memories with us.

You do have a way of bringing a reader to tears! Thank you so much for sharing this! You have had a lot of amazing experiences!