Haiku My Heart is a weekly exercise on Friday. We gather and speak to each other with our minds and hearts, sharing the fabric of life through words, art, photographs and pleasant greetings. Join us at Rebecca's recuerda mi corazon.

Snatching it out of thin air

The bad sent away 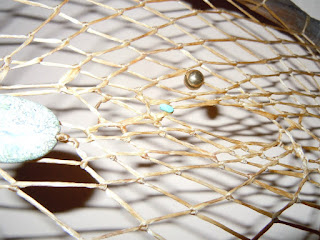 Keeping some, some discarded

Confident that they will be

A gift in my life

Dream Catchers, Dream Nets, Spider Nets. These woven strainers, adorned with beads, feathers and leather, made of wooden hoops and sinew, are to allow the dreams that are sent our way to be filtered. The  good mojo passes right through to your soul, the bad gets held in the web.

There are stories that explain it. Here in the upper Midwest where I live, there are two dominant cultures, Dakota and Ojibwe. Each has a story about what a Dream Catcher might be and how they originated. Both are similar. This one is about the Lakota and their idea and an excerpt taken from a site namedDream-Catchers.org

An old Lakota Elder and Spiritual Leader was high on a mountain and had a vision. In this vision, Iktomi, the great trickster and searcher of wisdom, appeared in the form of a spider. Iktomi spoke to him, and as he spoke, he picked up the Elder’s hoop of willow, which was decorated with feathers horsehair, beads and other offerings, and began to spin a web.

He spoke to the Elder about the cycles of life, how we begin our lives as Infants, move on through Childhood and on to Adulthood. Finally, we go to old age, where we must be taken care of as Infants, completing the cycle.

Iktomi said, as he continued to spin his web, “In each time of life there are many forces, some good and some bad. If you listen to the good forces, they will steer you in the right direction, but if you listen to the bad forces, they’ll steer you in the wrong direction and may hurt you. These forces can help or interfere with the harmony of Nature.”

As the Spider spoke, he continued to weave his web. When Iktomi finished speaking, he gave the Elder his web and said, “The web is a perfect circle with a hole in the center. Use the web to help your people reach their goals, making good use of their ideas, dreams and visions. If you believe in the Great Spirit, the web will filter your good ideas and the bad ones will be trapped and will not pass.”

The Elder passed this vision onto his people. Now, many people have a Dream Catcher hanging over their bed. The good will pass through the hole in the center to the sleeping person. The evil in their dreams are captured in the web where they perish in the light of the morning sun. It is said that the Dream Catcher holds the destiny of the future.

The elder passed this vision on to the people and now, many Indian people have a Dream Catcher above their bed to sift their dreams and visions. The good will pass through the center hole to the sleeping person. The evil in their dreams is captured in the web, where they perish in the light of the morning sun. It is said the dreamcatcher holds the destiny of the future.

I like this story. It’s not such a matter of believing every word of it to be true, but rather the idea, the essence, is true, that there are forces of good and evil and they have to come from somewhere. Why not in your dreams? And then, why not try to filter this energy as it passes near to us? Why not attempt to protect ourselves from the evil. Why not seek the good?

And since life has it’s ups and downs, ins and outs and is not really totally rounded out evenly for every person, then the circle may not be perfect.

This is my interpretation. When I am influenced to weave a Dream Catcher, I see life this way and see the circles, or rather enclosures, are like our lives. No two are the same and all have their own unique twists and turns, but eventually do complete this cycle of life.

My Haiku today are a reflection of the Spirit in which I discover what twists and turns have been in my own life, and how the journey gets side tracked and moved off course at times. Then again, “off course” is the course. It isn’t off then, is it? And what is good and what is bad, and why do we judge what happens in life and put a label on any event?

A lot to think about. The Dream Catcher allows me to believe the idea that the bad is gone and never reached me, and that all I live is good. All I need to do is to find it if it isn’t immediately evident.

With the advent of Fall, when cooler weather and shorter periods of daylight appear to take over our lives, as well as the convalescence period I’m involved with since my accident, leaving me with hours of sitting in one spot as I’m unable to be as physically active as I once was, I find myself creating these “Tools”, if you will. Plying my creativity in my choices of wood, sinew, beads, feathers, leather and findings.

I’m pleased to have this idea of Native American influence and this form of Folk Art in my life. With each circle I work with, I see places where life has twisted or turned, for good or bad, or what might have been perceived as good or bad, and the idea that the circle continues on its twisted convoluted journey and path and connects us all.

dear spadomen,
you have been dearly missed, so glad to have you back in the haiku circle.
so much beauty and light here to welcome us. love "seeing" your hands dipping into the mysteries of life. each dream catcher a perfect reflection of the web of love that connects us all.
thank you for your song of acceptance.
i think i will sing it all day!

The dream catcher, a representation of hope, as is your haiku.

So beautiful, these weavings of your words and the beautiful dream catchers that you make... that little bead reminds me of the pearl in the oyster... something precious and beautiful made from the irritations of life. May healing and all things beautiful and good continue to grace your life dear Spadomen...

Seeking the good and filtering the bad...sounds like a very good days work. And the tools you have chosen to create to help with that job are beautiful !
Wishing you peace and gentle creative time, Man.

Dream catchers are great symbols of being part of that net that connects us all. A bit of the metaphysical made visible. Peace.

I LOVE this story. Like you said, the story itself doesn't have to be true for it's essence to be true. We have to grasp what it's saying to us.

As for that - perhaps I should have had a Dream Catcher when I was young. I don't see "evil" paying me so much attention now as then. And I believe I was distracted enough to be kept from doing much good.

Hope you are healing well. I think making dream catchers would be very therapeutic. I may have to try one some time. And hide it from my husband LOL.

as i take care of my mom
she has become the child
i never had...

"did you wash your hands?"
"did you turn the water off?"

and
so
on...
the cycle of life

how fortunate
there is So Much Good Stuff
to save!

Seeking and seeing the good, Have a great weekend!

delightful description and interesting info and stories about these works of art you create....thanx for sharing yourself

so beautiful... when my eldest was born I placed a small dream catcher above her bed... when she was older she passed it on to her sister who still has it over her bed. May you continue to heal.

Great haiku and story to descibe what you create, your first 3 lines are my favorite.... Just perfect...
Andrea

When you quit expecting dreams, I will worry about you!

Thanks for sharing the history of the Dreamcatchers... and your own interpretations. I especially loved your first haiku!

I hope you are feeling better and getting stronger ~

Beautiful.
The words.
The crafting.
The shop.....

All of you.
All you.

I hopped over to your blog yesterday, but my mind was to fuzzy and I thought your post was important to go back to with a clearer mind... clouds disappeared in my head after I spend an afternoon on the couch (watching 'little house on the prairie' - can you believe that?!) and today, I feel much better.. so here I am, carefully reading the dream-catcher story which is special to me. May you stay healthy and happy and weave on for many more years my friend! HAve a nice weekend to start with...!!!

Your acceptance of Life's Circle of circumstance is a lesson for all of us Joe. It seems you have been invited to slow down and work your craft. It is important work to carry on tradition...and wait, having faith that this is the path you belong on and see what happens next.
Love to you♥