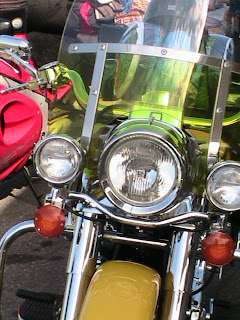 I wrote about this motorcycle ride in a post from last week entitled “I Remember Crow Creek”. The following story was an experience that happened at the end of that ride and I want to share it with you today for my Monday Mystery Tour.

It was the first Crow Creek Commemorative Motorcycle Ride in June of 2006. We had done the four days and 1200 or so miles of the motorcycle ride and we were setting up camp on the shores of the Missouri River at Fort Thompson, South Dakota, on the Crow Creek Indian Reservation.
There was ceremony and talk. The people of Crow Creek were out to greet us, many of them thanking us for remembering what had happened to them and their people when 1400 were exiled from Dakota land in Minnesota in 1863 via riverboat and rail car.

The trip took the lives of many and separated families from each other. The woman I was talking to was telling me the story that was told to her when she was a little girl. A story about her Grandmother, a Minnesota Dakota woman that was put on a boat near Fort Snelling at the confluence of the Minnesota and Mississippi Rivers and shipped like cattle down to Hannibal, Missouri where they were then put onto rail cars and sent to St. Joseph, MO. From St. Joe’s, they were again placed on the riverboats and shipped upstream on the Missouri River to Fort Thompson where an Indian Reservation, Crow Creek, was created.

These people were sent here to die for the sheer utter idea that the Minnesota Governor, Alexander Ramsey, didn’t want “Indians” in Minnesota anymore as they were causing a problem for settlers.

She told me these things from memory, as the narrative style of teaching the family tree was, and is, alive and well amidst many of the Native peoples of this land.

After she finished telling me the story, I gave her a hug. We both cried. I had no words, but felt in my heart that if I could, I would make it so these kinds of atrocities, and there were many all across our great land that had given much detriment to the Native Indigenous people that inhabited the United States long before it became the United States, never happen ever again.

I reached into my pocket and pulled out a stone. I had been wandering around the outer limits of the parking lot at the historic site of Fort Snelling, our meeting place and point of embarkation, for this annual motorcycle ride to commemorate the forced removal of the Dakota people, and while walking through the grass, saw some pebbles on the ground in a small area where the ground was natural.

I picked one up, examined it and for some unknown reason, placed it in my pocket. It was this stone that I retrieved and rubbed in my palm for a moment, then gave it to the woman that had told me the horrific story of the plight of her Grandmother.

Some believe, and I am one of them, that stones are Grandmothers and Grandfathers. They have been around through all time and has seen everything that mankind has done. They hold all wisdom and by holding them in our hands, we can get answers to things from this wisdom

She looked at it, held it in two hands and cried even more.

Then, she asked me a question for which I had no idea of what the answer might be. She asked, “Do you know what my Grandmother’s name was?”

I answered the obvious, “No, what was it?”

She very proudly told me while holding the small stone aloft,

Amazing. And heartbreaking what people can do to eachother out of greed/fear/arrogance.

And stones do indeed hold the history of the world.

And that didn't sound like coincidence or serendipity to me.

Oh, so that is why I love stones so...
Good Stone Woman is a most wonderful name. Thank you for continuing to honor her by sharing this story.

Peace, love and light to you, Man.

I read here this morning and thought about this Good Stone Woman all day--and the woman how told the story.....and the gift you handed her in so many ways.

Oh, and I adore the photo--well done!