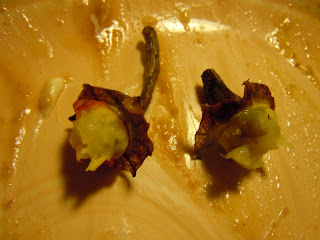 I snapped this photo after eating the other evening. This was all that was left on my plate. I had finally taken the time to make a batch of chile verde, green chile. I made this batch meatless and used a hot variety of roasted New Mexican green chiles called Sandia.
As I attended the Hatch, NM Chile Festival this year held over Labor Day weekend, I found many vendors selling the green chiles in a wide variety of processing options. Fresh or roasted. Roasted and peeled, roasted, peeled and chopped, roasted peeled chopped and frozen. So, you get the idea.
I chose to carry home three five pound bags of New Mexican green chile peppers that were roasted, peeled of their skin and chopped up. I got them home without thawing them out, so when it came to using them here in Wisconsin, all I had to do was thaw and prepare.
The dishes I intend to make are basic to my household. One is the chile verde or green chile sauce, like an enchilada sauce that we use over burritos, enchiladas, tamales, eggs and hamburgers among other things.

When you eat in almost any restaurant in New Mexico and order a Mexican or Southwestern dish, the wait staff will ask you, “Red or Green?”

I usually order the green. I like it a lot, so I’ll make some here at home. Another is a soup I invented called Cream of Mushroom Santa Fe. This soup is made from three kinds of fresh mushrooms and a healthy addition of the green chiles in a light cream base. A new recipe that I will make this year will be a green chile chicken chowder. A masterpiece of flavor with corn, potatoes, chicken and the chiles in a thick rich stew.
When these green chiles are chopped, there is no way to make chile rellenos. You need whole chiles for this as they must be whole to stuff them and fry them.
Thank goodness for a friend that is a master horticulturalist here in River Falls. She loves peppers of all kinds and we have been trading recipes over early morning coffee the past couple of weeks. She grew some New Mexican green chiles, which are also called Anaheims, and gave me a bag full. I decided I would use these to make some chile rellenos. You can also use whole poblano peppers, the process is the same.
Through pictures, I will take you through the steps. The chiles are put on a flame, like a gas stove or BBQ grill, and blackened. I place them into a plastic bag and put them in the freezer for about ten minutes.
I peel off the skins, make a slit down one side and pull out the seed pod. I rinse them in cold water and wash out what remaining seeds I can. Then, I stuff them with cheese. Any kind will do. I like a mix of Monterey Jack and Colby. I don’t stuff them so full that I can’t close up the seam.
I make a light batter from whipped eggs, some flour and baking powder. I dip the stuffed chiles into this batter and fry them in canola oil in an electric fry pan. I guess 350 degrees for the oil, or when the batter sizzles immediately after you place the battered chile into the pan.
I fry on both sides, turning once, and placing on paper towels to drain. They are ready to eat. I have made some chile verde sauce from the frozen roasted, peeled and chopped peppers and added a chopped onion to a them in a slow cooker. I cover with water, some garlic powder, black pepper and Mexican oregano. I let this sauce simmer for an hour or two, then thicken with a small amount of corn starch. I made this batch meatless, but traditionally a cut of pork bytt or pork shoulder is used, cut up into small pieces.
I have made some rice and seasoned it with tomato sauce, onion, green bell pepper and some red chile powder. I have cooked some pinto beans. I have onion, tomatoes, lettuce and sour cream ready to dress the plates.
I take the cooked rellenos, two of them, place them on the plate and smother them with the chile verde. I put down beans and rice, I sprinkle some cheese on top of all of this. Since it is all hot, the cheese slowly melts and becomes part of the platter. I make a stack of the onion, tomato and lettuce. On top of this stack goes a large dollop of sour cream. This dish is now ready to serve.
These photos are from that day. We really enjoyed having the taste of New Mexico here in Wisconsin. I thought those stems made a nice shadow shot.
If anyone would like a more specific industrial recipe with measured amounts and such, just Google Chile Rellenos Recipes, or e-mail me and I will explain further and answer any questions you may have.

Bon Appetit with your Peace

Thanks for coming by my blog and introducing yourself. I live in far west TX...El Paso, right on the U.S./Mexican border. I've always felt we should be annexed by NM since we're right on that state line too and we'd probably get a bit more attention from Santa Fe than we do from the "politicos" in Austin...oy, don't get me started.

Hatch is just right up the road from us, but we're very lucky to have the chile at our local grocery stores. Around here, many of the stores have their own roasters, so we get roasted long greens and jalapenos year round.

You might like to Google, "Queso Fundido," which is a favorite here in my home...served hot with warm corn tortillas. Being of Mexican decent, I have lots of old recipes handed down from my grandmothers, friend's mother's, other mothers...well, you get the idea. Your mushroom chile soup sounds like my Chile Potato Soup, which is also another favorite around my "casa."

Again, thanks for coming by....am signing up on your blog and I'm askin'...what are your favorite movies and books??? LOL

I almost always order Chili Rellanos in mexican restaurants. It is how I judge if I'll come back.

My Mama made the best Rellanos. These look yummy.

Yum! You had me til it got battered and then I had to rule out. Though, I'm pretty sure there's a substitute that'd stand in for the flour base in the batter.

And can you serve mine up in a divided plate, please?

Yes, I know I'm a demanding sort and you'll tell me that it all goes to the same place. However, my tummy has compartments. :-/
JUST sayin'...

The chiles rellenos sound delicious. I occasionally order them if they are on the menu when we are eating out, but I am the only one in my house who enjoys them (credit my youth in California), so I don't attempt to prepare them at home :)

we spent the weekend roasting chilies and tomatillos from the garden and cooking up our traditional harvest time verde chilie.


i have included you in my post today and hope you will find the time from delicious chilies to have a look.
thank you for your place in my heart!

Yum!
I will be very interested in your Green Chile Chicken Chowder!
I got out my Mom's recipe for Chile Rellenos. She did a bake. Did the chilies like you, put them in a pan, a mixture of carnation milk, eggs, salt and pepper poured over the top.
She grew up in Redlands CA but moved to a small town in MN her senior year of high school. I think our extended family were about the only ones who ate Mexican food in that town. LOL I have always loved it.

Oh yum, yum, YUM! I hadn't tried one of those til we moved to the States ten years ago. Now I love Mexican food! Thank you for the recipe. I'm going to give it a try.

Thanks so much for your comments everyone. So good to see other green chile lovers in the crowd.

Georgina... I'm makingn that Queso Fundido immediately! Looks delish! Thanks for stopping by and making that suggestion.
Peace

katherine.. It is so good to see you here and on your new blog writing again. Thanks so much for your visit here. I will ndo the Chile Verde recipe soon, I promise!
Peace

Mel... You can NOT bread those peppers and just broil or bake them, naked, then cover with the green and enjoy. (Honestly, I was gonna post the gluten free version, I'm kicking myself!)
I am greateful that you are my friend. Thanks.
Peace

Dimple.. I just returned from New Mexico, so I am still in the green chile spirit. I don't make them on a regular basis, but glad i did. Thanks for coming by. Good to see you.
Peace

rebecca.. Anytime you come here I am grateful and very pleased. Thank you so much for all you are and all you do to bring us all together.
Peace

Joan... I am very familiar with MN. Lived there for manyb years, all around the state. Definitely hard to find good Mexican food way up north, but it is possible. I'll have that stew soon and post a report. Thanks for visiting.
Peace

susanna.. Nothing like having something that I usually have in a restaurant right here at home. It will be worth the effort to make these at home. Glad you mstopped by, wonderful to see you. Thanks.
Peace

Oh, do I miss New Mexico green chilis! Last christmas my son sent me a ristra full of red, dried chilis and I am carfeully eeking them out. sometimes I just stick my face into the ristra to smell that wonderful fragrance! I remeber the smell of all those green chilis roasting in roadside stand. Oh yum.....I'll have to find me some!

Thank you for stopping by Paintdiva... It was a bumper crop mof chile in the Hatch Valley this past growinjg season. Plenty of ristras and burlap sacks of green chiles. Many places will ship you what you need.