Every Sunday in October, folks are gathering to post photos and tell the stories of how Los Dias de Los Muertos, The Days of the Dead infiltrate their lives this time of year. Billed as The Art of Remembering, Los Dias lets us listen to our loved ones and secure their memory once again. The celebration is actually on November 1st and 2nd. Come join in and see more at Rebecca's recurerda mi corazon and Stephanie's Mango Studio. 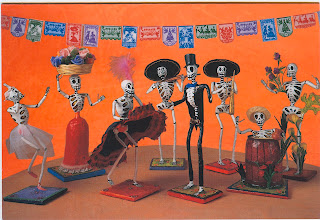 Today marks the second Sunday in October and the second post in Los Dias Bloglandia. Many are posting weekly photos and stories during October about Los Dias de Los Muertos, the Days of the Dead. Follow the links above to see more.
It is being touted as The Art of Remembering. That truly sums up what The Days of the Dead celebration is for us here at Spadoville. As I mentioned in the first Los Dias Bloglandia post, we have taken this idea and attempted to share it with others.
We invite everyone to our home for the November 1st festivities. We print up small card invitations and pass them out to friends. We mail them to folks we don’t see regularly. I have posted them on the Round Circle blog and will do so again this year in another week or so. I tell people to come, sometimes a stranger walks into my home and shares in the festivities.
These photos are from Los Dias celebrations from 2006 and 2007. In 2006 we were living in Ashland, WI and I had a storefront/shop with living quarters on 9th Street. My main room was where we put the Ofrenda. It is a large room and I cleared my work tables of projects and replaced craftwork and art with empty space for food. Pot Luck sharing.
The people gathered and talked, music played from the stereo system and a great time was had by all.
The side room was utilized as well. More food was placed there and people gathered in that room too. The year before was our first year living in Ashland. It was 200 miles from St. Paul, MN where we used to live and where most of our friends were. Not many traveled the 200 miles to come to our celebration and I totally understood. Some years, November first falls on a weekday. A lot of people don’t venture out on a week night.

I have been asked, “Why don’t you just have your party on the weekend?”

I have done this once and I sensed that it was not the correct thing to do. The celebration is for the spirits of our loved ones. They appear on November first, not October 29th. This year, 2011, November first is a Tuesday.
I had done the usual invites that first year in Ashland. Anyone I had met at the local coffeehouse or in the shops in downtown Ashland were invited, but people, although friendly and courteous, weren’t quite sure who this guy was that is inviting them to a strange celebration that no one had heard of before and wasn’t practiced around these parts.
We had two guests show up in 2005. I am sad to say that one of our first guests to our home in Ashland for Los Dias is no longer with us in person. He passed to the spirit world and now visits us every year as he has taken his place on our Ofrenda. His name is Darl, yes, like Carl except with a "D". We miss him. He became a good friend.
In a years time, more friendships were made and folks learned about who we were and what kind of people we were. As you can see, the rooms became full of participants. Sure, some came to party, but many genuinely wanted to gain knowledge of what we were trying to do and liked the idea so much, they bought in to the idea in their own homes.
One of our best friends from Ashland is quite an artist. She is a quilter and found the etching of the La Calavera Catrina by Jose’ Guadalupe Posada to be fitting for her subject. Below is Posada’s piece, which has become an icon for Los Dias de Los Muertos all over the world, and the finished quilt that she made for us as it hangs over our altar. 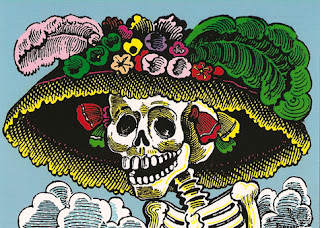 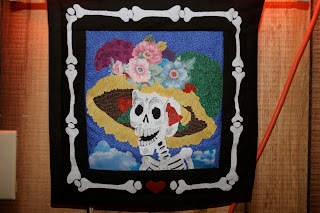 In 2007, we were living in a two room cabin on the Great Lake Superior. We called this residence The Cabinette. It had a really fine outhouse and a large wood burning stove we fired up for heat. But it wasn’t a place where attendance of 50 to 60 people for a party would be comfortable, nor would there be room for our altar which had grown from the meager shoe box size beginnings as seen in last weeks post, to the wall size display that we use today.
Luckily, that Winter, we house sat for a friend and had a neighborhood home to celebrate Los Dias. Lacking for space for the altar, which had grown to be quite large by this time, I set it up on the front porch.
I used a table with colorful tablecloth and set a Mexican made bench I had brought home from a recent trip to New Mexico as ‘shelves’.  Funny that now that bench, complete with a new paint job, will return from where I bought it to adorn the patio at La Casita, our Winter getaway in New Mexico.
That 2007 celebration was complete with live music as attendees included many musicians. I had bought a bag of kazoos and passed them out so everyone could join in with the music making.
These annual celebrations have created so many fond memories in our lives and as I am told, in the lives of others. As time went on and people learned what we were trying to do at a Los Dias de Los Muertos fiesta, they bought into the concept and shared photos and memorabilia of the lives of their loved ones on our altar.
Some people left what they brought. Some took their offerings with them when they left that evening. A week or so after November 2nd, we would pack up the Ofrenda and put these items away, along with our own memories, until next year.
We still put out the photos and items left by people that we either don’t know, or can’t remember whose relatives they are, every year when we set up our Los Dias altar. There are even some items that mean something to someone in one of the photos, but we don’t remember who.


I am sure the spirits know when they pass by that one of their loved ones was here at some time and left the memory entrusted with us.

Next week, the art work that is part of the permanent altar display in our home.

I agree with you on having it always on the 1st. The intention for having the celebration is lost when adjustments are made to have it on the weekend only. You, and the others have inspired me to start my altar in earnest this year. I'm not sure about having a party yet, but next year, will try to start the party part.
Who knows, I might just have teh party this year too....still deciding!

you are the embodiment of just what i hoped these four sundays in october would bring, genuine enthusiasm to celebrate this soulful tradition!
thank you for taking us through the many years of your families celebrations. i love how your altar has grown with every year. as have your hearts as you include and encompass so many. this is a celebration that endears us to loved ones and encourages us to live with passion!

What a great many people, new friends you have met. Wonderful!
And yes, I agree, it needs to be on the 1st.
Lovely.

This is great! You have given me many ideas on how to celebrate. This is the first year I have made an ofrenda. It is very personal. Your post made me see how special it would be to include friends and family in the celebration. I will make invitations as well.
Thank you
:-)

Beautiful ofrenda's and wonderful words. Your altar's are big and beautiful. It's great that we can celebrate our loved one's now gone together. On that day all our thoughts will mingle together and be carried out with the wind so that we can all feel the love. Thanks for sharing.

It is just incredible that you carry this tradition on and on, with you as you move...and welcome friends into your home to honor and remember.

The stories are the thread that bind us all together.

Wonderful celebration of life!
It's so kool that you have made so many friends in inviting people to your celebration. That in itself has to be very rewarding. Bravo!
Adriana

This is a Great and educational post and I really enjoyed it!!!! Love all the pics!!!

Happy Anniversary to you and 'she who must be obeyed'. I do hope you have a lovely day and evening of it. I've no doubt the two of you will.

And this--is just too cool. It's an awesome celebration of life. And even if the 'what goes with whom' is forgotten, I'm thinking they'll sort it out.

HAPPY ANNIVERSARY to the two of you!!

Blessings to you and yours!

You and Mrs. Spadoman are real pros at this and I'm thinking about what you've done over the years and who you invited. I especially like how you put that Mexican bench to act as yet another shelf. You are giving me ideas--thanks.

This is such a profound celebration Joe .. it faces one of the worst fears most people have about life .. the end of it .. death. But this celebration raises it up beyond that .. there is life after life and remembering those whom we have loved will pass through us on that day to visit .. well, that is a shared comfort isn't it ?
Joy : )
PS Looking forward to the art work !

What a wonderful celebration. And how lovely to see all the beautiful, festive altars over the years. I feel almost present at your exciting preparations :)

I wish I could be at one of your celebrations! I love your altars, and the energy and joy that you put into this. Thank you for sharing all these lovely photos! Pam

At the party I attended yesterday I acquired 3 small skeletons for my altar. I appreciate having a specific time to celebrate my loved ones passed. I feel close to them again. I really liked your story today. Hopefully I will have stories like this to tell some day.

I enjoyed seeing these photographs of your altar, Spadoman. You put so much thought and attention into the details. And I love that you invite not only family and friends to join you in the celebration but also strangers at a coffee shop! You have a generous spirit.