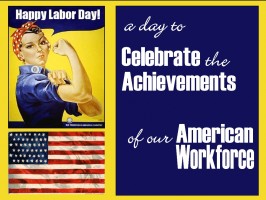 The best Labor Day to all. If I am correct, we honor labor today. That's why the corporations that hire labor make them work so they can increase the profits for the stockholders. I don't spend money on Labor Day. I won't encourage them. I hope you enjoy the day and keep in mind the sacrifices the working class went through and continue to go through to serve your needs. Today is the day set aside to honor the working class.
In the meantime, things happen fast around me. I make things happen, fast. I see them in my mind’s eye, I envision the whole procedure, actually live it, then it happens. I can’t tell you that I know every detail, but I can tell you I know what I set out to do is gonna take place one way or another, if it is suppose to.
When I left Chicago in 1974, I saw us building a home on some acreage. It took us six years from the time we left to get the land and another couple to build the house.
That is kind of what happened here in Truth Or Consequences this time through. I had the idea of living at the Palms for years. As long as I have been coming here, I walked by this place and loved the colors and the way it was laid out. I liked the carports and the little covered patios off of the apartments. I liked that it was close to the Hot Springs District of T or C. It’s not just close, it is right smack dab in the middle of it, and only a block away from the coffee shop and deli where I make my morning appearances.

i love reading this, your manifest destiny is alive and worthy of applause! yes...to living awake at the wheel of life with an open and willing heart!

i am looking forward to this new chapter in your book of adventures,
Viva La Vida Casa Los Palms!

My Mothers family hails from NM.
As a child we visited T or C shortly it was named for the TV show hosted by Bob Barker....
Yeah Getting old here too.
ENJOY!

My Mothers family hails from NM.
As a child we visited T or C shortly it was named for the TV show hosted by Bob Barker....
Yeah Getting old here too.
ENJOY!

Ahh, New Mexico the "Land of Enchantment" and it truly is. Looking forward to the Palms, never was crazy about the RV. Missing my mister but will be there soon. I am his #1 mover!
see ya at the Palms.... xoxoxox

How cool is that? What a great little apartment you've gotten your hands on! I certainly believe that if it was meant to be, it will be! Sounds like you've got our hands full.
Do you need any other household things for the apartment? I suppose you have all you need, but if there are gaps, let me know. I might just have what it is that you could use there.
Bravo on living until you die and not just being alive until you die!

I'm gonna sort through photos from a journey of a few years back and FIND that photo of the cute little place you've moved into......cuz BEEN there, seen that! And found it so colourful and dang cute that I snapped a photo or two.

NOT KIDDING! Pretty sure I'm right....could be wrong.

But I LOVE the sign! And look at that view outta the door.

Oh, it's a good day for unpacking boxes and claiming your little peace. I'm excited for the two of you--and the missus. *laughing*

I was referring to you and the punkin' cycle, dontchaknow! *laughing!!!!!*

Most excellent, sir.
I'm beyond thrilled for how things worked out.
Ain't it cool how that happens?