A Shadow of Itself

Before getting into the Shadow Shots, I want to mention and remember that today marks a special anniversary in the history of the United States. Ten years ago on September 11, 2001, The World Trade Center in New York City was attacked and hit by hijacked aircraft. Many people lost their lives.
The government here thought it wise to rebuild the twin towers of the World trade Center. A friend of mine is an iron worker in New York City and has been working on this mammoth project. He sent me these arial photographs of the scene. 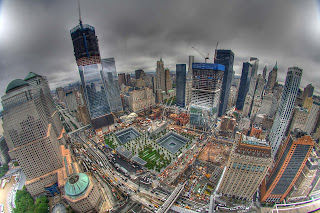 Above are two fantastic photos of the 911 Memorial & WTC site. These two photos are very new. The Memorial will open for the victims families today. Tower 1 (Freedom Tower) is up about 80 stories, going to 102 & Tower 4 is up about 35 stories, going to 65. Towers 2&3 are just coming out of the hole.
Today, I remember the victims, the families of victims and the myriad of effects this tragic event had on the lives of so many around the globe. My mantra for Peace still resounds to all.
Now, on the the Shadowy Business at hand.
I’ve photographed this place before. Amidst all the shadow shots at my blog and the literally hundreds that show up every weekend, I certainly don’t expect you to remember this particular place. 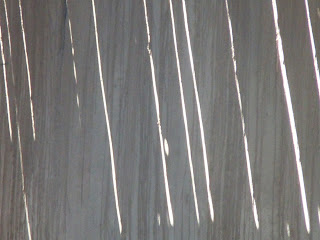 As you may know, I am away from Wisconsin and in New Mexico. I used the same road as I did last Winter and came across the same building. This time, I was traveling North on New Mexico Highway 1, in the small town of San Antonio, and instead of early morning Winter sun, it was mid day late Summer sun. 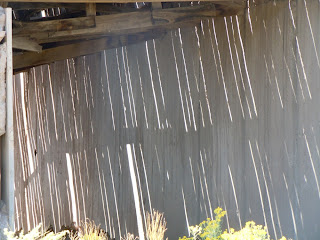 I took the close up you see above of the northern interior wall. As you can see in the older photographs of the entire structure, the shadows played out very different from one season to the other. Here is the post on Round Circle from last February for you to use to compare. 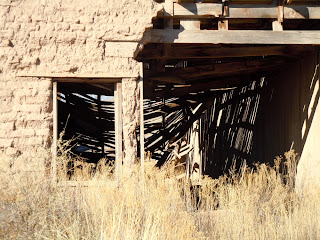 Right now, I’m attending a motorcycle rally put on by Triumph motorcycle aficionados in Taos, NM. The weather is cooler than normal, wetter than normal and not conducive to taking leisurely rides through the twisty mountain roads. I’m glad I packed up the laptop and could share this shadow shot with you.
I believe if we stayed in one spot where we saw a shadow that was created, we could shoot there all year, in different seasons and different times of day and come up with literally millions of possibilities. Today’s post is an example of that.
A big Thank You to Hey Harriet Photography for creating this weekly blogging experience. People from all around the globe participate and post their shadowy shots and stories. Check out Hey Harriet Photography to see many fine examples of shadows in pictures and find out how you can participate.

I like to return to the wrecks of former buildings over and over again, because the shadows change constantly and there's always something new to see--as your comparison shots demonstrate!

Bits of shadow and blasts of light,
Morning and evening, noon and night;

Spring or winter, summer or fall,
Light or shadow—embrace them all!

Awesome.... I saw the first shot and remembered the photos!

I get a prize, right?

Yaknow...something like you're admiration and friendship for life would work. :-D

Great post for the day and a lovely tribute to 9/11. Thank you!

I didn't have time to visit on Friday (or yesterday, for that matter) but now I catched two posts in one visit - yeay! I love your haiku about the little bell-flowers... they are so tiny and yet stand out so tall. Gorgeous! And the shadow photos - wowzah my friend! I love those shots! I always love that time of day when the sun is low and the light is like this, with long shadows that look magical... Enjoy the ride and stay save my friend!

Hi Spadoman,
Thanks for coming by my place; I always enjoy your visits!

You are right about shadows changing depending on the time of day and the season; I would add the weather to that list, also!

Please come and see my shadows at Nostalgic Marveling, have a blessed Sunday!

Hey Spadoman, thanks for sharing the photos of the World Trade Center progress. I was unaware that the towers were being re-built. don't know where I've been for the past 10 years that I didn't know that, but I'm happy they're going to once again grace the skyline of New York City. I love your shadow shots for the day. I'm surprised that Taos is getting rain, but that's a really good thing. any time it rains in N.M. it's a good thing. I'm just sorry it had to be when you're there on a motorcycle!!! they need rain badly any time of the year. You're in one of my most favorite spots in the whole world. Go to Doc Martins for me! happy day to you Spadoman. safe trip back to Wisconsin too. still sunny and warm here with no rain...

It is sad that such a catastrophic event hasn't yet led to peace in the world - is that something that will be reached in our lifetime?!
But life goes on, and one of the enjoyable things is sharing our passion for shadow shots with fellow addicts! I like the idea of shadows revisited - I constantly take photos of the beautiful scenery which surrounds me, to look at how it changes with the seasons.

Intriguing post of your journey! Loved walking with your thoughts on each moment! And the old, shadowy building is simply an iconic piece of magic!

You know I'm lovin' those shadows, warm and always inviting...and I agree, I think, here in Iowa anyway, we are going to have a long mild winter. I'm seeing no signs yet anyway, like woolly caterpillars and fat squirrels, but they do seem to be more active right now and the Canada geese haven't moved, but it's still just September and we have a ways to go yet...I can dream can't I..have a great trip and be safe!!!

Hello Joe .. It is hard to believe it has been 10 years since this mammoth tragedy happened .. I was home .. with a contractor who was putting in another bathroom for us .. husband and son were in Nova Scotia attending a funeral for husband's uncle (His father had died in June and then his uncle in September .. so it is a year that will never be forgotten on many fronts) .. I actually had the TV on and saw the real time shot of the second plane hitting the tower .. I felt sick seeing it and couldn't fathom what was going on.
My heart goes out to all of the victims every where.
Your shadows .. yes ! as soon as you explain where it was with the other pictures it did ring a bell.
I hope the weather clears up for you and it will be more enjoyable: )
Joy
PS those shots from your friend way up there are awesome !