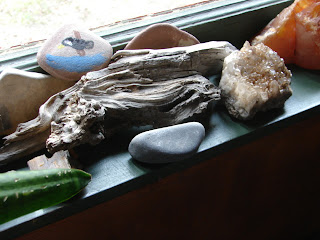 Rocks, stones, pebbles, boulders, scree, outcroppings. What do they mean to you? Do you cast your eyes downward when you’re at the beach or on a trail? Do you look at some, pick up a few, and put some in your pockets? What force is at play for the entire process? The process of going to the beach in the first place? The process of looking at, or for, rocks? What attracts your senses? Color? Shininess? Shape? Size? Is it something that’s out of the ordinary?
I believe all of these things, individually and collectively, are the spirits at work. The rocks are the spirits. Each has its own soul. Every grain of sand was at one time part of a mountain or the mountain itself. Worn down through time from wind, rain, flowing water, frozen water, snowed upon, sun drenched, fogged, clouded over and exposed to temperatures from so cold no human could live and breathe, and so hot the same.
Each one we see, that our eyes are drawn to, a masterpiece. None other like it. Similar, yes, but no two the same, like snowflakes. Some colored bands, some with cavities within sheltering gemstones. Translucent, opaque, solid, light, heavy, granite, chert, jasper, crystal, metallic, cinder, coal, diamonds. 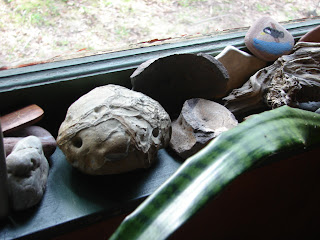 I have an affinity for rocks. I have been taught that they are our ancestors. They are our Grand Mothers and Grand Fathers. They have seen all that man has ever done. They carry all wisdom because they have experienced everything in the world.
Think about it. The pebbles that are cemented together with tar to make an asphalt road are still pebbles. The accident that happened last year. The speeding car or motorcycle. The slow moving sightseer. The hitchhiker, the bicyclist. When she got out of the car to rebel from mistreatment and walked the rest of the way to town.

The pebbles of that road have seen it all. The explosions of the tumbling of the World Trade Center or the Murrah Federal Building in Oklahoma City. The pebbles saw it all. They know what happened in every detail. They know who did what. And there might have been a stone sitting on a sidewalk. It becomes part of the rubble.
And it lives with every bomb we drop, every human sacrifice made, I’m sure there was a rock or a grain of sand, a particle of the Great and Sacred Earthen Mother nearby to witness. Taken from the Earth. Made into a structure with cement, then blown apart and released as a stone again. They never die. They never disappear.
So, what about it? Big deal. Eh? You can walk amongst them, or ignore them. I choose to pay attention. To wonder why I pick them up but not ever really expecting an answer, not ever to actually know the reason why the ones I have are with me. The ones on the windowsill. The ones on the dresser. The ones I carry in my pocket and travel with me. The ones I hold and ask questions to. The ones I pray with while holding them in my hands. The ones I look at from afar on pages of magazines or on a computer screen, telling them. “I’ll try to get there to visit you in person.”
Maybe it’s these rocks that call me, make me want to be on the move. Begging for a visit. I know I love them. And they let me walk over them, or up to them, touch them, feel their textures, their sharp or smooth edges. Their grain. Their hide.
These are some I have around me at home. Believe me, I have asked the Great Mystery if it is okay that I take them home and have them live with me. I give gifts to the Sacred Earth Mother in return for the gift given to me. Some stay for a while and then find new homes by me giving them to someone or bringing them to a Sacred place to rest.
Some that have come into my life are unique to where I got them, but not unique in their existence. This almost turquoise piece was cleaved and can be held in two positions. One for digging, one for scraping. It was found way atop a coastal hillside, one of the highest points around Cape Mendocino on the Northern California coast, along the Bear River Ridge Road. A place the locals call Monument.
It was found with just a small edge, the rounded part that might be fitted into the palm of your hand, sticking up out of the ground. The rest of the rocks in the area was whitish in color and jagged, fractured flagstone. This was the only piece like this. Anything that resembled it was miles away on the black sand beaches of the Pacific Ocean.
This is my heart. This one was sitting in the sand on the Oregon coast. I had just had a heart episode that almost killed me. This heart was given to me by Mother Earth and was telling me that my heart is solid and the arteries were open for the business of carrying the blood I needed for survival.

This one was but a small pebble in the sand, with more than 95% of its mass buried beneath. This agate looks like someone’s butt! In the sun, it glows.
These are from the shores of the Great Lake Superior. Others are from the lava beds of a place called Craters of the Moon National Monument in Idaho, and still others found while walking around the desert in the American Southwest. It’s funny that I use that word “found”. Like many that say Christopher Columbus could not “discover” America since there were already people here when he arrived. How could I “find” a rock that has existed through millennia?
I’ve been shown relics in the city, in the streets. How did they get there? Why are they there? Do the spirits send them out to observe us, to report? Are they, might they be, aliens? Do we ever see them move? Are they really inanimate?
That blueish one from the top of Monument traveled there somehow. Who cleaved it? Did a human being that walked there long ago work with it and carry it here? Did a child that had it in their pocket, and got tired of carrying it, bring it?
And the question can be asked why for every instance, for every rock, pebble, stone and grain of sand. Do you ask these questions? Do you also ask them of the trees and plants, the grasses and flowers?
These are some of the thoughts I have about rocks. What are yours?

I've always loved rocks. I pick them up and want to keep them but usually leave them. I have found some very interesting ones on beaches - one a beautiful fossil of a very large leech. It has disappeared somewhere. I hope it turns up again one day.

I don't suppose I view rocks as spiritual - as witnesses - but I do see them as part of history especially when you see evidence of people long ago on them.

There is a quiet collection of heart stones in my studio. found mostly by moving water, oceans and seas. Many stones have spoken to me also, but your words are a light on my own intuitions. thank you.

I love Joe's story and his rocks.
As a matter of fact, I've moved them from home to home, washed them, displayed them and admired them. Great story honey.

Oh Joe, one of my favorite topics! ROCKS! :) I still have and treasure the Smithsonite you gave me years ago. I love the dusky blue color and think of you and Barb whenever I see it. I've been picking up rocks since I was 7 - after 30+ years I have literally a ton of them :) and they are all special. I love how you talked about them bearing witness - only you would have come up with that comparison - and its so true. If rocks could talk I wonder what they would say. Most of them say "take me home" :) and I do. Thanks again for a great post. I loved the photos too!

I'm sooo guilty.
Other people are beach combing for shells (I do that too...) but the vast majority of my time is spent scootching around, looking for pretties.
And yes, they talk to me and insist that I take the home, the little boogers! LOL
In jars, on shelves, around plants, on tables, inside glass lamps...(that one ain't getting tipped over, believe you me!!)...gotta love 'em. And yes, they're witnesses to what came before me and what IS today.

I figure I've affected the ozone by providing a home for so many. I'm probably, in part, responsible for global warming, huh?

Seriously--like you, there's some I carry, some I display. Some I hang on to during meditations...some that were gifted me that are priceless icons in my life with special meanings and purposes they fulfill. Strange to some, but I'm almost sure that you get it, given what you shared here.

Himself chides me about 'em. But he 'gets it'.....cuz every now and then he plucks one when he goes on an adventure and tells me "It wanted to come home to you".

He's usually spot on. I palm that rock and we connect in a warming, spiritual kinda way.