This Day in October 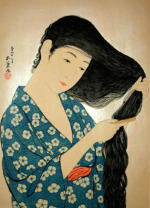 The inspiration for writing Haiku on Friday comes from my friend Rebecca. You can experience more beautiful photos and haiku by visiting her site, recuerda mi corazon 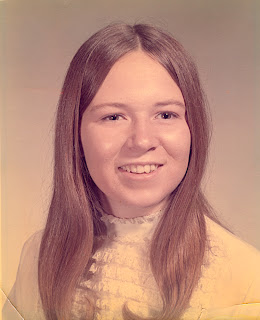 This is my sweetheart in high school. Tomorrow is our wedding anniversary. Thirty Nine years. I know, I know, this is an odd numbered year. It's not one of those well rounded numbers. Most folks don't get invited to their high school reunions or celebrate the odd numbered years of anything, but we do mark it in our minds and mention it. Besides, no one really knows if any of us will be around next year for the even numbered big Four Oh! In this case, this one will be mentioned out loud today. I did write some haiku, but there is no way any haiku of any length or number of syllables could tell you the real story of the dedication this woman has given to her family and to me over the years.
We met on January 27, 1971. She was seventeen and still in high school, due to graduate in June. We were married on October 9, 1971. We didn't date for so very long, but she did turn eighteen if that's what you were wondering. A lot of water has flowed under that bridge, and it still flows today, as strong as ever.
Let there be no mistake. As my friend Christopher asks of me often, "Am I the only man that comes to your site?", I admit I have many blogger pals that are women, but I sleep in my own bed at home every night with my wife. It is a fact that most of the bloggers that come here and comment are women, and most of them are married too.


It is the artform and the writing, the photos and prose, sharing of the spirit, uplifting inspiration, letting each other know we are beautiful, wanted, needed, loved and the expressions from our hearts for a better world, a peaceful world, that bind us, not our gender.

I am beholden to only one and we share a date in our narrow slice of history tomorrow.


Barb's mom and dad didn't believe us at first when we told them we wanted to get married. Barb had just turned 18. I had returned from the American war in Vietnam a year prior. I was 22. When the parents didn't listen, we went ahead and made plans to run off and get married. When her dad realized that we were serious, he took me to the local neighborhood tavern and sat me down at the bar and asked me, as was some tradition in some time and place, "Why do you want to marry my daughter?"


My answer was the same as if you asked me today, "I love her." We went on to drink a couple of beers and salute the accepted answer with a shot or two of brandy, Korbel's to be exact. Ed insisted on having a big wedding. This was his only daughter and he wasn't going to give her away without a party. We only had a couple of months to plan, but it was a traditional Catholic Church wedding with a large reception. Eddie and Lois, Barb's Mom, invited everyone they knew. He got a hall called the Mangam Chateau and had a free and open bar from start to finish. At midnight, the establishment told Ed the bar would be closing, Ed took out his checkbook and wrote a check to keep the bar open another two hours. We partied on well into the night.

A time later, the check was returned in the monthly statement and Ed put the cancelled check in a frame and hung it over his bar, which was at home, in the basement rumpus room, bragging to everyone that it was his largest ever bar tab. Recently, when Barb's brother met us at Lambeau, he brought her a box of pictures and mementos. Among them was the now famous Bar Tab Check:

I leave you with a few photos I have found to be great captures of the love of my life. My own personal savior from the ravages of war, the one who guides me and keeps my heart at peace. My spousal unit, my wife, my friend, my lover, my soul mate, Mother of my children and perfect Grand Mother. I refer to her as Mrs. Spadoman, but her name is Barbara. We are one.

To honor your anniversary:

years deepen—
so does the loving
between them

That's one heck of a bar tab wayyyyyy back then.

What a lovely tribute to the bond that's continued for 39 years.
And how graced the two of you are to have found each other....

Happy Anniversary to both of you.

Happy Anniversary!! and thanks for sharing a beautiful part of your life. Wish you many more peaceful years together.

Dear Mr and Mrs Spadoman...HAPPY ANNIVERSARY...congratulations on enduring all the years with love, patience and tenacity. This is a beautiful tribute and oh so inspiring. Peace and love forever.

I salute you.. a standing ovation for such a lovely recital of your story..

An anniversary
A happy reminder of moments
Beautiful
and happier hopes for those
Which would come..
May the Moon continue to smile
and shine on you always..

what a milestone! and i'm sure she loves you even more now that you've posted the bolero picture...too funny...wishing you 39 more!!!

Oh I just love this! What a tribute, what a strong sense of love that's shining through this post!

A wonderful haiku and prose tribute to your wife and to many happy years of marriage.

What beautiful and loving tribute. It's so wonderful and heartwarming to know that such love stories do exist. The happiest of anniversaries to you both!

Happy Anniversary!
I wish you many more happy years together :)
All the best Marinela x

I just welled-up with emotion when I read your words. Your loyalty to each other touches my heart.

I feel priviledged to have come across you via Rebecca's blog, I appreciate your lovely comments too.

Here's to you both,
Happy Anniversary

Congratulations to you, for making such a fine choice. Lovely, lovely, post.

This post makes me want to cry...in a good way. I love the haiku and your stories (especially the one about keeping the bar open an extra 2 hours for an obscene amount of $). Nice going, Ed! :)

Spadoman,
This was a heart-opening and beautiful story about you and your young bride, now your life partner and closest friend. I am happy for the both of you and happy to know that such love and fidelity continues in this world. Bless you both on this your anniversary.
Noelle

Many congratulations to you both on your long and loving journey together.

Perfect haiku for a perfect relationship. Happy Anniversary. My prayers to both of you for a happy long life.

Cheers for all those years!

hope you have a grand old day of it today

Congratulations! In addition to Gold, Silver, Ruby, etc. in France all the other wedding anniversaries are marked by something: 39 is crêpe. I don't know whether this refers to the material or the pancake. You could make each other His 'n' hers crêpes Suzette for supper to celebrate!

my dear mr. and mrs. spadoman,
today the sun rises for you. may you walk in laughter, wisdom, honor, love and peace.

this is such a loving tribute and i am touched to have this lively glimpse into your lifetime together.

your letter arrived today and i am honored to have one more of so many connections with you. maggie is right here beside me and will travel with honor to san miguel,where she will dance in the gleaming love and candle light.next year...you will all come together.

Happy anniversary! Nice to hear two people are so fond of each other after so many years!

Thank you all for the greatest greetings. We're starting on year forty today.

By the way, I did some calculation of that bar tab check. In the inflation calculator that I found, that same check would have been written for just around $7900.00 if it were today. Ed left us years ago, but I know he would have paid it anyway!

Peace to all and Thank You all very much.

What a beautiful post. I love the bar tab story! My only question is with the photos you have chosen of your friend and lover. Nothing since youth of her looking dressed up and beautiful? Eating a brat??

The happiest of years upcoming to you. Every anniversary is an important one, as you say.

thank you for sharing this amazing love...

We had a great anniversary and want to say Thank You to all who have wished us well.

That is so touching. I probably missed your anniversary but send you both wishes for your happiness and love to continue for a very long time.