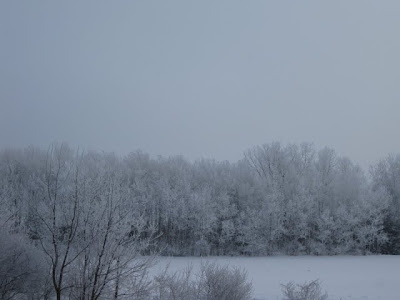 View from the Spadoville deck on a frosty Saturday morning.


This morning, the early morning light took its time getting through the drawn shades. Another gloomy day? I don’t think so. When I looked at the clock, it was half past eight. I got up and went into the kitchen to get the kettle on the boil for a couple of brew bars and looked outside. It was magnificent. Jack Frost had visited and flocked all the trees and bushes in a feathery wash of crystals. 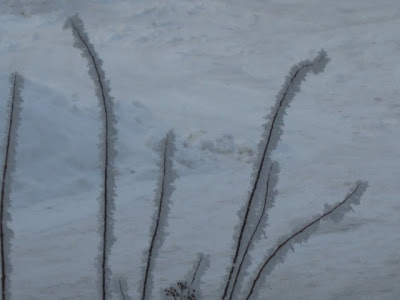 I stood there and looked for a while. I glanced at the bird feeders. Some times, the birds are so plentiful I can’t even count how many kinds have stopped by to feed. This morning, at least at this time, there was not a movement of anything anywhere. I grabbed the camera, which is sitting on a small half wall ledge, and took a few shots. These posted were taken literally moments ago. My feet are still burning from standing on the deck barefoot. That was dumb, but I wanted to capture the moment. I wanted to show you what I was seeing. 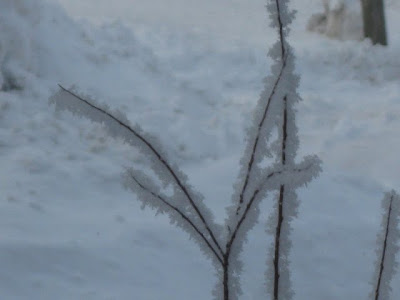 A few moments later, the Cardinal showed up. The bright red one, the male. Then other birds started to fly in and feed. Like someone blew a whistle and the day started for the wildlife. Yesterday, I saw an Eagle. The sun was so bright, I actually saw a flash in the trees. The white of the head and tail feathers almost glowed. Always a good day when you see an Eagle. 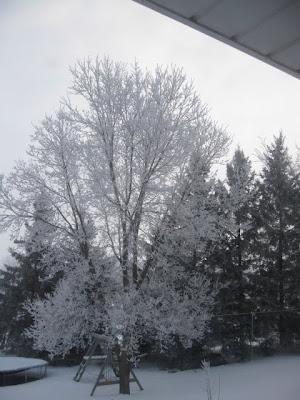 This frosty tree sits smack in the middle of the back yard. You can see the snow laden trampoline and the restless swing set awaiting Springtime.

At the bottom of this post, there are some bird feeder pictures from a week or so ago. Watching nature has a soothing effect on me. How about you? 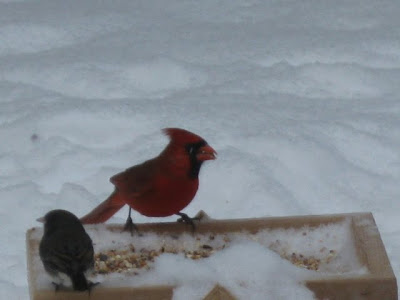 You don't see the cardinals sharing too often. 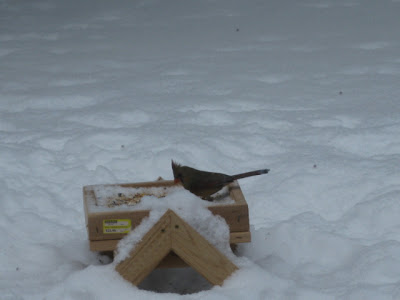 The female of the species. 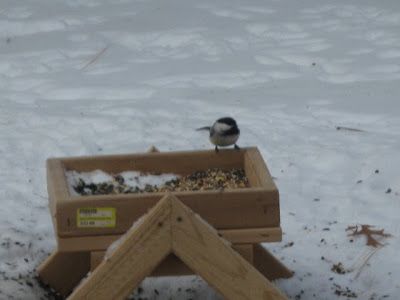 Ha, first! Thank you for this, very evocative, although winter here in the south of France isn't all that different.

My feet are still burning from standing on the deck barefoot

- have to say this reminded me of the opening line of 'Casablanca':

Hope any signs of frostbite were merely temporary.

Nice photographs but, boy, does it look cold there. No matter the weather I too love communing with nature - in our case a part of the Forest Park woods behind our place with tree moss grown so intense this winter you could read a book by it if it fluoresced :-)

I find frost fascinating. . . the way the crystals twinkle and sparkle. . .

I don't have much of a view from my windows, so appreciate seeing yours (which I like!)

The frosty twigs tell it all - brrrrrrrrrrrr. Love the bird shots. The birds are a highlight around here too at the Empty Nest. The cardinals sometimes feed each other - the male and female. It's quite spectacular to catch them at it.

Stay warm, Joe. Peace to you, too.

Christopher... Thanks for stopping by. Good to see grace these pages. No frostbite, just frozen to the bone! The South of France, isn't that where the Coneheads are from?

CE Webster.... A pleasant surprise to see you stopped here. Thank you. I will think Spring, while I am in New Mexico next week!

susan... Really not that cold, and all that frost was gone by noon. We watched as it blew off the trees. It looked like it was snowing while the sun was making look like diamonds falling from the sky! Hopefully we'll get some warmth here, but I'll be in New Mexico next week. It'll seem like Spring to me.

View... Glad you like my back yard view. I am fortunate to live on a plot of land that adjoins the University experimental farm. No neighbors when I look Northeast and the ones in other directions are shielded by large pines.

Ms. Sphinx... I love the birds. I sit and watch them. We are blessed with the cardinals, but also have blue jays and woodpeckers along with the smaller finches and juncos.

Peace to all and thank you very much for stopping by here at the Round Circle.

Awwww.....chickadee!
Like you, I awakened to a gorgeous frost Saturday morning. I didn't do the barefoot thing...this time. LOL
Himself and I took off to go Eagle watching at Bellevue--but alas, they weren't flocking the dam as normal....waters are on the move so they're free to flock to other places. But we took a backroad (as we do...)and found oodles of 'em hangin' out. Ohmygosh--I'm with you....it's a good day when there's Eagles involved.

What great photos--and I do thank you for the frozen feet adventure for the captures. They're awesome, indeed.
Cardinals are brilliant right now--finches aren't. But the Junco's and Jays and chickadees, woodpeckers and flicker....awesome....
I think I could be reallllll comfy on that deck of yours.....
I'd never get a lick done....LOL

Mel... You and Himself sound like me. I try to get on the small narrow country road. I experiment and learn the trails so I don't have to drive the freeway back so I can look for wildlife. Do you remember the pictures I posted a month or so ago with the 11 eagles in the trees? You must have a spot like that it sounds like.
Thanks for stopping by. Glad you liked the photos. They best snapshots are those in my head, the ones I didn't take pictures of of. Thanks for coming by.