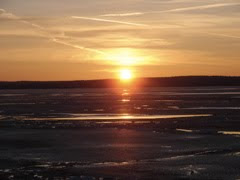 It’s time to write. I don’t want to wallow in pity about my Mother’s passing, but a few things must be said here in the public forum. After all, I did the eulogy at the church. This is essentially what I said there. Others heard it, and it would be fitting to mention a few highlights of her life here at Round Circle. I accept that it will be boring reading, but it must happen for the closure. Besides, it's Only the Good Friday. This is "Good", to remember another.

My Grand son, DJ, cried hard at the funeral. After he settled down, I reminded him that his Aunt Maggie had passed away many years ago, and even though he had never met her, he still knew who she was and what she looked like. He nodded. I think he understood what I meant when I told him about how we will keep Grandma’s spirit alive forever.

Carmelina Rosa Caruso was born in December of 1920 in Chicago. She had three brothers and six sisters. She was the third youngest. She lost her dad to pneumonia when she was nine years old. She started giving herself for the benefit of others early in life. She stocked the coal fire and helped with family chores a lot. When she got older and worked helping a blind boy get to school, she brought home the money and gave it to her mother to help with family expenses.

Mom took care of the household and the family which was the norm in those days. I remember the Dessert Flower cologne and the pretty dresses she wore. My dad insisted on dinner at five p.m. on work days. She had dinner ready and always looked her best. In the 60’s, she went to work and got a job at a local bank in the town where we lived, Melrose Park, IL, a suburb of Chicago. 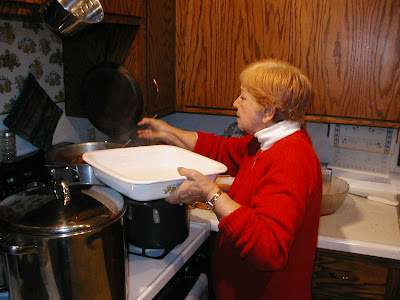 Mom doing what she loved to do, feeding the family.

I remember going to pick her up from work and seeing her through the window. She operated a machine called a key punch. She was a pioneer in the computer era. She parlayed that job into a position with a major corporation, Ford Motor Company. She retired from Ford when she turned 62.

My dad passed in 1983. I had moved up north to Pine City in Minnesota. I had left Chicago to start my own life with my family in 1974. Pine City was where I was to build a house. The construction had started and we were well along when Mom visited. She asked, “Where’s my room?”

I answered and told her that I was building an addition onto the house on the side. I had little kids all around and Mom thought she could do the most good living with us after dad left this world. Mom moved in and took care of my family when Barb and I worked during the rest of the 1980’s. 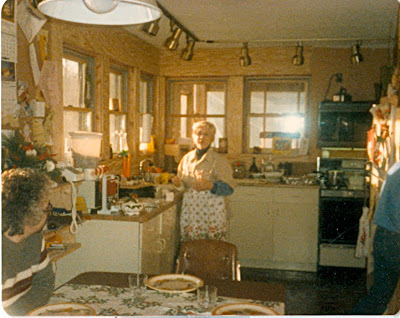 Seeing her devote her life again to taking care of people, Barb told her she needed some recreation and prodded her into going to the local Senior Center for an activity once in a while. Mom did, and at a dance, met a man that also liked to dance. His name was Ernie. They courted a while, then Mom married Ernie. She ended up taking care of Ernie in his last days as he suffered from complications of diabetes. After Ernie passed away, she went back to the Chicago area where my sister was living and lived near her.

As time passed, Mom got older and had many episodes of pneumonia over the years. The doctors said this scarred her lungs and diminished their efficiency. She had pulmonary fibrosis and in the end, her lungs failed. 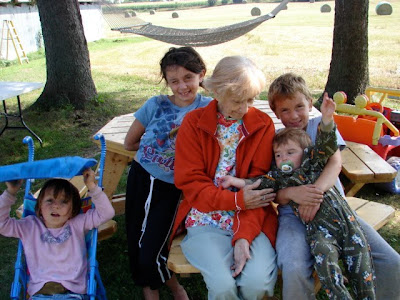 With all the Great Grandkids, 2008

This is such a brief portrait of her life. I can’t think of anyone that didn’t like her. I can’t think of anyone she met that she didn’t give something to. The people that worked in the office with Barb commented one time that they liked the cookies she made, (Barb had brought some from home into the office), and my Mother would bake and send them some at least once per year.

When times were rough for us in the late 1970’s, Mom sent us a check every now and again. That is what kept my family afloat and fed. She has done that for many others as well over the years. This generosity and unselfishness is what Mom has always been.

She left behind her three children, seven Grand children, eight Great Grand children and many cousins and friends. She was the last to pass from the ten siblings of her family. She has a Legacy site. Feel free to have a look.

I’ll go on with life. I returned from Chicago earlier this week and am already in my routine getting the kids on and off the school bus. I have the recipes and have been cooking mom’s best dishes. Some of you have the spaghetti gravy recipe. I shared it some time ago. Maybe this weekend I’ll make a batch in her honor. We’ll toast meatballs. The nice moist ones, like she taught me to make. Her secret was so simple. “Put a little water in the mixture before you broil them.” she told me. Water, what a secret! 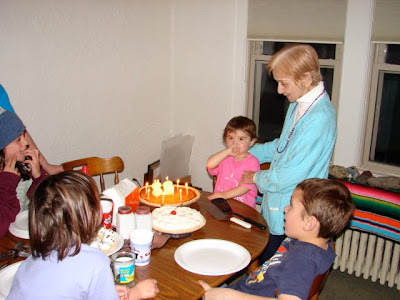 December of 2008, her 88th Birthday celebration.

I wish my Mom could have lived forever, if she was like she was last year. But I wouldn’t want her to be hanging around if she was like she was last week. She wasn’t in pain, but she struggled and I know she prayed and asked her maker to end it peacefully. Her prayers were granted when she passed in her sleep. I am fortunate that I was able to be with her for a few days at the end. The last thing she said to me directly was while I was seated next to her.

She looked at me as I held her hand and whispered,”My baby, my baby boy.”

You've been so graced--and she was so well loved.

Bit tearful hearing of and feeling the love--but it's a good tearful. A heart tearful.

I didn't grow up with a mother, but was graced with a step-mother who tried to bring to me what I'd missed for years. I learned about a bit of water in the meatballs from her. I can't make the recipe as is--gluten gets in the way--but I think I'll give it a whirl with the substitutions.....just cuz....

Thank you.
And may G-d comfort you and yours.

Rest knowing how very well she was loved--and obviously she loved well.

this piece has brought tears to my eyes (my mother died on Valentine's Day a while back now, so it's all a little close)

but tears in a good way

people don't live forever, but beautiful memories like these last a long time

That was a truly sad yet heart-warming story about your Mom. I know you loved her and her last words to you were so touching. Saying good-bye has to be the most difficult thing in life we're called to do.

Peace and blessings to you and yours, Mr. Spadoman.

Thinking of you all, Joe.

I'm a bit teary as well....but honored to read your wonderful tribute.

enjoy cooking from her recipes and remembering the details of her life. I'm sure you have stories to tell your grandchildren about her...tell them LOTS.

What a sweet tribute to your Momma.

How warmly and well you have remembered her.
She sounds like a very lovable and loving Mother.