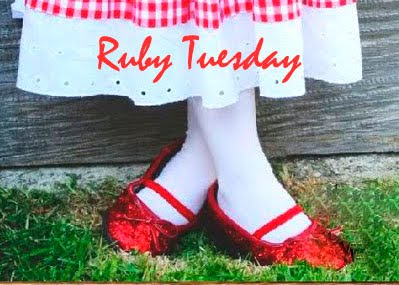 Tuesday already. I left for New Mexico last Tuesday. It was a short week and not at all long enough to be away from the Northland Winter. But it was a break and I liked walking around in a sweatshirt instead of a parka, not to mention eating some good green chile.

But this is a post for Ruby Tuesday. I shouldn't be talking about "green" anything. Seems I have a transportation theme going here this week. My Granddaughter driving her ruby red fire engine in the back yard last Summer along with a picture of a beautiful red doorway in the small hamlet of La Mesilla, just South of Las Cruces, NM. 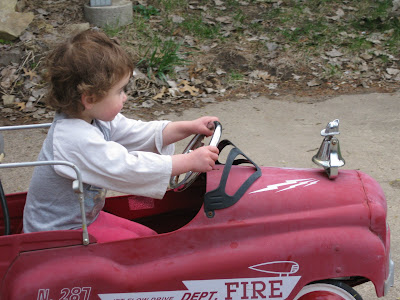 Gracie Jayne racing to a fire! 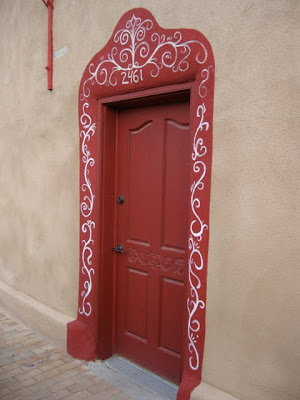 These next four photos are from a previous trip to New Mexico. It was April of 2007, and we escaped an early Spring snowstorm. Our little red Focus is no longer amongst the living. Blew the engine last June. But I liked the way I preserved its image. The pictures of the grill were taken at gas stops as we traveled South and away from the snow. You can see from the photos of the ice on the front end of Red Ranger, (Our pet name for our car), it took some miles to get out of the Winter in 2007. 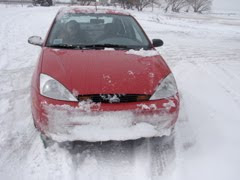 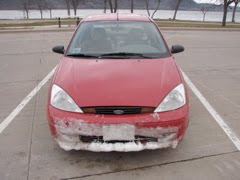 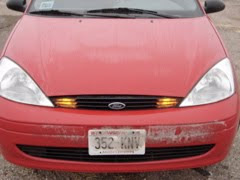 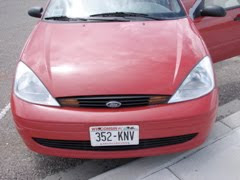 And another type of automobile. The Bumper Car! This last one is yours truly when finally getting to a warmer climate, and I am wearing a red, of course, sweatshirt. 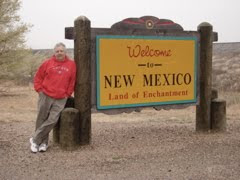 Relief from the Northland Winter at last!

Ruby Tuesday is a brainstorm of MaryT/The Teach, who pens the "Work of the Poet" blog. Check out here web site, her Ruby Tuesday offering,, and see other Ruby Tuesday posts from the list of participants at the end of the post.

Oh, I loved the de-icing progression for that little red car. And what a gorgeous doorway/door!

Mostly, I like the thought of warmth and sunshine and red rocks peeking out of sandy earth......

I hope the journey brought you some much deserved peace and contentment.

Great photos and I love that doorway, it's beautiful.

Thank you for visiting my offering today!

Beyond the red door
elders wait to welcome with
gifts of bread and wine.

p.s. Having a Ruby Tuesday here today. Gorgeous male cardinals against the backdrop of snow.

Oh a sweatshirt! *sigh*
Red and green go together well though don't they? Especially chillies :)
I love the little car heading south.

There used to be a blogger names ruby shoes, whom I always loved reading.
Must be something magical about the color red...
Welcome home, and welcome back to the cold!

I simply adore that first image showing your ganrdaughter in the little red fire truck. . .

it's ages since I've been in a bumper car

hope the sun's shining for you

Welcome home - here's hoping that snow will let up and spring will come soon.

Lovely! Sounds like you had a nice escape. While you were in La Mesilla, is that restaurant still there...the Double Eagle? I think that's what it was called years ago. It's supposedly housed in what was the main hacienda of a land grant. Delicious food ... and ghosts! Yep, I sat on one there. A ghost, that is.