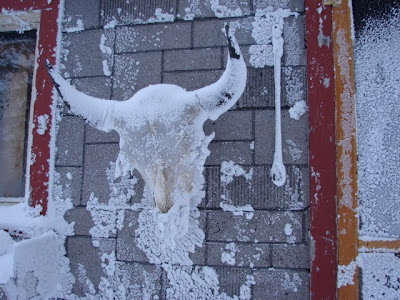 An icy sculpture at the Cabinette.

I had to get a new one. My old one wasn't working right and that storm we had last Wednesday was pretty brutal with a foot of snow. When the wind came up and started to make the drifts, there was no way I could have shoveled them out of the driveway. You know you gotta keep that driveway clear. The city won't let you park along the curb from November first to April sometime. Then there's the mailbox at the curb. Access there is a must since the US Postal Service requires a clean entry to and from the street side mailbox or mail delivery could be in jeopardy. 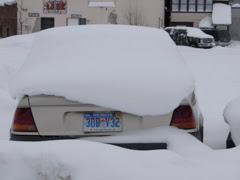 I bought this little paddle type snowblower that a friend of a friend had for sale. It has electric start and you don't have to mix the gas and oil. It's a four stroke engine, 3 horsepower. I paid $100.00 for it. A good deal as the new ones of this type are $439.99. I priced them at Home Depot and Menard's. Snowblowers of this type are good when the snow depth is below a foot of snow and it is light and fluffy. That snow that comes and is sometimes heavily laden with moisture, (you know, the kind that packs together nicely for snowball fights and making snowmen), is hard to move with these cheap ass paddle snowblowers and you might play hell having it be effective if the snow is only a few inches deep. 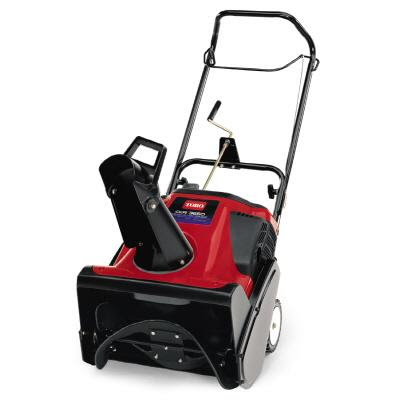 The used machine I bought kinda looks like this one, but it is a Bolens by FMC and not a Toro.

Anyway, the snowblower worked fine to get the driveway cleared off. But the next day, when it got really cold and temperatures dropped down to single digits and below zero overnight, the new-to-me machine started, but wouldn't stay running unless the choke was pulled "on" and kept in that full on position. I held the knob out, but when I let go and the machine vibrated, the choke went in slightly. Any movement at all stalled it and it wouldn't stay running no matter how long I held it open in my attempts to heat up the motor.

So now, the snowblower sits in the garage. I'll have a look at it today and see if I can fix the choke and keep it running. I'll also call the city and see what their plans are for plowing to the curb as I live on a curve and the street widens, making plowing to the curb an extra sweep by the city plow truck driver. I've been trying to hire some enterprising individual to shovel or remove snow, but no luck. I guess I've been barking up the wrong tree. There is a college in town. You'd think there would be some college student that needs to make some money. I'm paying $20.00 per hour, and if I have to, I will go out and buy a new snowblower. Maybe I just haven't hit the spot where the college kids or enterprising individuals go to read about possible job opportunities.

Now I know these sites of snow on roofs and talk of heavy snow and cold might bring the fear of God into the hearts and minds of my friends who live in warmer climates. I apologize. But remember, those of you who migrated from your home land years ago to escape the wrath of Winter in the East and Midwest, you probably have earthquakes or some other natural malady to deal with. Snow melts, eventually. 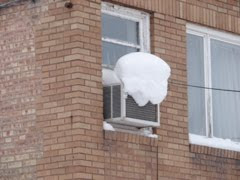 Won't be needing that air conditioner for a while.

Until then, since the new-to-me snowblower doesn't work, I'll go back to using my old one. It actually ain't that bad of a machine when you think about it. Here's a picture of it at work during a snowstorm last year. Notice the great power of the blower and how it keeps the snow all headed in one direction so it piles up neatly along the side of the driveway. 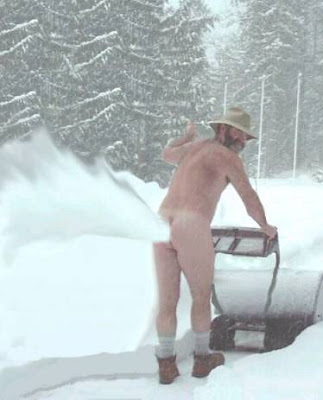 LOL Well then!!
I'll remember to keep myself inside at the sound of a snowblower starting! ;-)

That fluffy stuff can still get heavy--you're talking to the woman who lives in a yellow house on the corner....which means way more sidewalk. And two driveways.

I'm graced with good neighbors on both sides. Himself grabs a shovel and goes for the porches and steps--the boys with the BIG machines go to work. LOL Front loaders work darn good on the snow, lemme tell ya. But I ain't buyin' one! Why cheat the neighbor? ;-)

My job is the broom. Yup--I whisk off the inflatable snowman, wreaths and railing--and make the coffee/hot cocoa.
I'm thinkin' of making cut-out marshmallows, given how dang cute they are!

Here's hoping that new blower gets to working for you. And that some 'geeze I could use some spending money' kiddo finds the advertisement. (good luck with that one--seems that's a rare thing around these parts....)

Stay warm--and don't dally on the blower. I hear tell there's another round coming this week.
(maybe snowman snow! Woohoo!!)

I always think how lucky you guys are to have snow. . .

. . .but actually, that last image has thrown me somewhat and now I'm kinda lost for words