Some Thoughts For Today 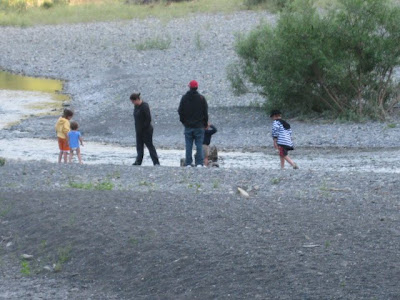 
Monday morning. I have a folder in my external hard drive that is labeled just that, Monday Morning. I’d post a story on blogger and then save it to a file and put it away for safekeeping in this external hard drive. This way, I’d have these stories and comments around to create a legacy. So, long after I’m gone, the words can be printed out and put into a ring binder and the Grandchildren’s children can read about their Grand father and something of his life and his family.

Sometimes I go into that file and reference a title or a subject, look for a picture I posted or just grab one of the older stories and repost it as an archival item. These days, when reading and writing blogposts seems not so much interesting as it was, I entertain the thought of reposting old stories. I used to have a regular Monday morning feature called the Monday Mystery Tour where I would tell travel stories from my past.

I’m sorry. I have a bunch of blogs on my side bar, old friends, people I admire and respect. I don’t go to their blogs these days. I sit and want to write, but I don’t know what to write about. Lately, the exchange has been with just a couple of people. Seems like that’s all I can handle. I'm not looking for pity, I'm just explaining that I'm in a rut. And the rut has lasted a while. I'm trying to get a handle on it, it's just taking a while.

In trying to figure out where I’m suppose to go with my writing, I have come to one sure conclusion. That is, I am changing and my lifestyle is changing. During January and February in years past, I’d be on the road, traveling, headed West usually, making adventure, living life. I’m still living life, but the focus is completely different than in years past. Things have evolved and aren’t like they used to be. That is not a bad thing, it just is.

It was a great run, those traveling years. Working for the motion picture studios, criss-crossing the country, moving equipment, or just taking time between shows to head out to our second home on Humboldt Bay near Eureka, California. Driving cars or moving people from here to there, or just on the road, checking out the American life. I’d take a different road every time, one I hadn’t traveled before. I'd stop in a new to me diner or coffee shop, seeking them out in towns I've never stopped in before. It was great fun and great adventure.

I wrote the stories. Maybe I haven’t told every detail of them all, but I’ve told them. Now, they would be the repetitious banter of an old man, repeating what he said last time you saw him. That old man, that’d be me, would have the same exuberance and enthusiasm, but the story would be old and crusty, used up and not the least bit desirable. That has been happening to me lately by the way. I’ll be talking to a friend and he’ll tell me the same story he told me last time I talked to him. Every once in a while I’ll hear him say, “Did I already tell you this story?”

Seems like the more I dream about taking a trip these days, the more impossible it seems to be that it will happen. Money is one culprit, but also the idea that I am needed at home and this is the place that I want to be. Together with my family.

Yesterday, I spent one of the most glorious days I have had in a while. My Grand daughter Lilly stayed over night. Mrs. Spadoman had gone to work. My brother and his wife were here, but were picked up by her daughter and taken to Minnesota to visit relatives. That left me and Yoody, as I call her, a nickname from years ago that stuck.

We had a couple of errands to run. The bank drive-up window, the hardware store, the grocery. We took the slow roads, winding through the Northwestern Wisconsin countryside, looking at the snow laden hills and black tree limbs jutting out into the blue sun lit sky. Sure it was cold, but we were toasty with the heater blasting and the sun warming us through the windshield. 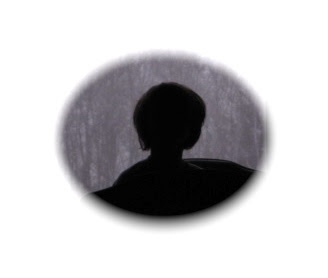 A picture I took early one morning recently, Lilly's silhouette against the backdrop of a gray morning.

We sang and laughed. We told stories. We ate at McDonald’s. I know, corporate thieves, unhealthy and all that. Some days, for a few minutes, it’s not about that. I sacrificed healthy eating and the corporate greediness for a portion of an hour with a child that I love unconditionally, and who loves me. For this day, any place else might not have been the same. She chose the table where we sat.

It was a special day for sure. Yoody went home last night. I’ll be alone today after Mrs. Spadoman goes to work. I think I’ll have an apple run to take care of for the food shelf, but other than that, no plans. I’ll be lonely without Yoody around. I’ll have to think about my Mom, as she is in her last days, down with my sister in Chicago.

It’s not that I didn’t think of Mom yesterday, I did. I just had the edge of the impending loss taken off a bit as Yoody and I were together. Later in the day, I talked with my sister. Earlier, I was with my brother. We all had our thoughts about the situation, and the situation is that we wait. And while we wait, life is going on.

Mom is comfortable and stable for the time being. Her lungs won’t get any better, and we don’t know how long they’ll breathe in the oxygen the machine makes for her from the ambient air in the room. After that, I turned to Yoody. She didn’t know it, but she was giving me solace.

And when I took off my shoes and laid down on the sofa, she came to my side and kissed my forehead and told me she loved me, just as I had done last week when I was with my Mom.
Posted by Spadoman at 4:44 AM

I was thinking after the mega road trip this summer, you'd be happy to chill out for the winter, settle in & enjoy winter from the comfort of your new home.

The grandkids are a nice balance, as the circle of life goes on.

Thursday is a blue moon.... a rare and special event to welcome a new year.

Funny that--the shift to different things....some caused from the circumstances in our lives.
I consider it an awesome gift of timing--which just tickles me pink for some reason. I guess it's just one more fine example of me not knowing what's good for me. And just when I think I have THE best reason to whine--I get gifted something like the bug. I can look back and see how the pieces all fell into place and it just blows me away.

And as I type, I'm awaiting my 20lb new years eve party--she was coming for the evening and will stay the weekend...which is the bestest thing to bring in the new year, methinks.....this from a woman who's spent a lifetime of NYE's silent and reflective on the loss of her mother at a very young age. Who'da thought, yaknow?

Tonight is a full blue moon. And what you shared here--as rare and as special. I mean that.
Sometime I might actually be able to capture (as you have) that bond, that connectedness which you and yours share. I hope I do it as clearly and as lovingly as you.

As for the weblog--I don't know where yours will go or how it'll transform. Mine moves with me--because it's for me 90% of the time. (which is why it sometimes makes no sense to any observers..LOL) Where it'll go from one post to another--really, it doesn't matter to me. Matters to me that it remains a place that I can say what's true--from my whacked out thinking to my inventories to little life happenings I wanna hold on to....to the whiney stuff that I just need to dump.
There's purpose for me.
And I've been graced with some good company along the way.

GREAT places for morning coffee or afternoon coffee, I might add.
And I get to hang around with the most awesome circle of friends one could ask for. :-)
Some of 'em even make a decent cuppa coffee AND give out treats!

It's a rare, blue moon....
Tonight--and the places that I'm graced to be able to visit that have become a safe place to hang my hat.

Thank you for that, sir.

And joyous New Years--I look forward to more cups of coffee at your place in 2010.

such a beautiful piece of writing

thank you for sharing it