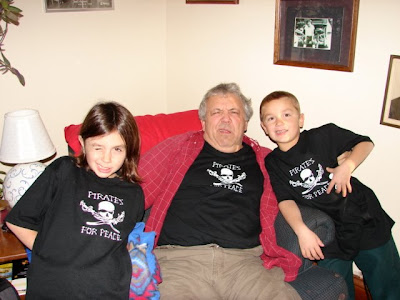 This picture has nothing to do with this post, but I thought it was funny and might set the mood as one of laughter and happiness. That's how things are going here at Spadoville the past few days, just wanted to share it.

No, not Pirate season. It's always Pirate season, AURRRRRRRRGGGGGGGGGGH MATEY, a keg o' rum a time 'r two. It's that late December season. Christmastime. I baked cookies yesterday for eight hours! It's baking season! Anyhoo, like my friend Batmo says, I liked this picture of the two older Grandkids and me showin' off our new stylin' Pirates for Peace T-shirts. These glow in the dark and are really distracting when I forget to put on a more pajama type garment at bedtime. Seems the glow emanating from my chest keeps me awake!

Here is a great little story about A SHIP that is used by the non profit group, Pirates For Peace. And Here is the Cafe Press website where you can buy a Pirates For Peace shirt of your own.

"Now, enough of that rapin' an pillagin', here's whats I comes here to tell yuh"

So, a few years ago, I wrote a Christmas story. I’ll be posting it as Christmas Day rolls near. In the story I mention a particular ornament that has been around my family for years. It’s that little plastic lighted angel that sat on top of our Christmas tree over the years.

I mentioned that we always called it Harold. When my young tender children would ask why his name is Harold, my wife and I would explain to them that it was from the song, “Hark, the “Harold” Angels Sing”. I believe we also might have mentioned that the angel was singing because he had this tree stuffed well, you know where. 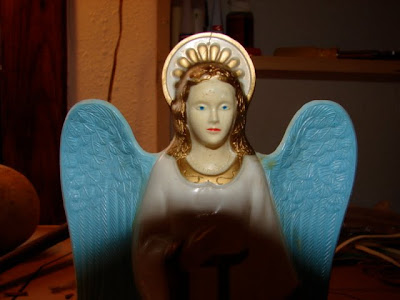 My oldest daughter, Alyssa, read the post after I wrote it. She shed a small tear for the memory. Her husband, John, took the Grand kids out to get a Christmas tree for their home the very next day. In the act of decorating it with lights and ornaments, my daughter called me and told me that “Harold” was broken.

I told her to bring it over to my house and that I’d try to fix him up. She did, and he was in terrible shape. I did the best I could do, and with the help of some Krazy Glue, put Harold back in good spirits. So far, the glue is holding fast. I told my daughter to be easy with Harold when she shoves the tree....., I mean places Harold on top of the tree. He is tender there as he is quite old and such rectal operations wear heavily on the elders. 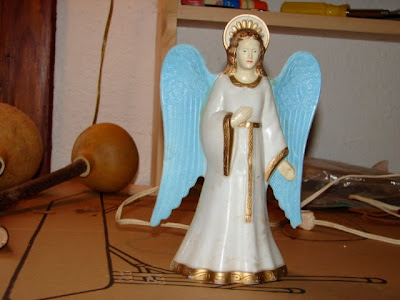 Harold, as he looks today

The bottom line is, Harold lives another Christmas. He is lit and standing straight and tall. I thought maybe you good folks out there would like to have a look.
Posted by Spadoman at 5:03 AM

I'm very chuffed that you shared Harold with us!