A Sunday Morning at Spadoville 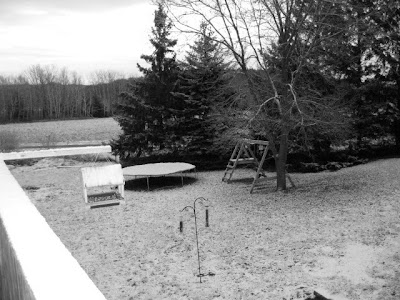 Spadoman's back yard on a late November morning, 2009.


What a beautiful morning. The early light seemed to stay gray and muted for hours. I said to myself, “Hey, you idiot, why don’t you look out the window?” When I finally did, I saw a this thin blanket of white covering the grass. Then I went to the NOAA weather site and it told me that there were to be some flurries and mostly cloudy skies today. Well, the flurries were heavy enough to cover the grassy areas, the bird feeders, the trampoline and the swing set with snow.

That’s okay I guess. I’ve been having a lot of luck with the prospect of not determining if the weather is good or bad. Weather just “Is”, and I accept that. I think about the plans I have for today and wonder if I can still do what I wanted to do despite the weather. Thing is, I had no plans for today, at least nothing that I was gonna get done or wanted to do. It’s a lazy relaxing Sunday, the last day of a long weekend.

You may question my ability to have a long weekend since I am retired, or at least haven’t worked for wages for quite some time. I live on a fixed income. But it is still a long weekend. Store hours change, my spousal unit is home and doesn’t work on weekends or holidays, friends call, mail service has some days off, banks and post offices are closed and since this particular long weekend included Thanksgiving, that meant an overload of advertising flyers in the “free” shopper papers that get hung on the little hook at the front of my street side mail box.

I didn’t do any shopping for Christmas gifts, which is what the Black Friday hype is all about. But I did make a couple of decisions over this long weekend. Pretty big decisions I might add. You see, I haven’t put up Christmas decorations or a Christmas tree in eighteen years. I decided to put up a tree this year. And to add to that, since my daughter and her boyfriend came over for Thanksgiving dinner and brought the back pack mounted leaf blower and got up on the roof and cleaned out my rain gutters, I decided I would put a string of lights up along the whole front of the house, about 64 feet worth. One continuous string of colored lights. The C-9’s, the big ones. Not digital, not mini, not icicle strands, not anything but one long string of lights.

Besides, isn't the tree part of Christmas the part the Pagans started? I guess when they "lit them up" it was by burning them for heat and not to decorate. Who knows anyway? I certainly don't believe everything I read whether it is in a bible or a newspaper.

The tree will be a fresh one. The local American Legion is selling trees this year from a local grower. With all I said in the last post about buying from local farmers and growers, it seems to make sense to get a Christmas tree that way as well. Instead of going out and buying one that I cut myself from a local grower, I’ll buy one that is already cut. That will raise some money for the Legion which does some good stuff with their donations. Of course when I mentioned to my friend that I was going to put up a tree, he told me not to buy one because he has a guy that will get me one. That’s funny. I used to live in Chicago. There was always someone that could get you something one way or the other.

Since I haven’t put up a tree in eighteen years, I don’t have ornaments of decorations of any kind. So, I decided to ask the Grandkids to help me string popcorn and cranberries, an old time honored tradition somewhere I am told, and make construction paper chains of red, green and ivory colored paper glued into connecting circles. If we come across, or make, some ornaments, we’ll use them and start collecting from scratch. 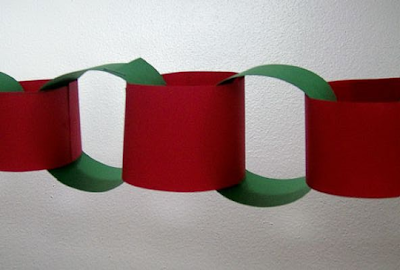 Construction paper chains like this will be festooned over our Christmas tree.

Of course we’ll have Harold, the angel, sitting on top when all is said and done. I’ll be reposting the Harold story again this year later in December. I’ll also repost the story about a Christmas past in our lives here at Spadoville.

This all sounded so good. People were pretty happy. Until I slipped and fell down the stairs of the deck yesterday morning when I attempted to fill the bird feeder with a fine cardinal mix of seeds. There was frost and I didn’t pay attention to it. I slipped and my legs went out from under me. For some reason, a lucky reason, I turned on my side and when I fell, I hit my right elbow and shoulder and jammed them pretty good. If I had allowed my legs to fly up and my fat arse to go down, I’m sure I would have injured my back and maybe even my head!

Ibuprofen and Tylenol are doing the trick right now. But it hurts and has slowed down any creativity with regards to Christmas trees, Christmas lights or anything else that requires the use of my right arm. I had planned on working on some craft projects since it was this long weekend.

For those that may not know the story, we lost our oldest daughter in a car wreck in 1991. Ever since then, we have muddled through any holidays, birthdays, anniversary days and celebrations in our household. So, this decision to put up a tree and lights again is epic. I can’t tell why I want to do it now, but I satisfy myself by saying that it is just the right time to try it again.

So, that’s part of what’s going on here at my place. Hows things witchoo?

I'm very proud for you...and for the whole family. Epic--monumental...freeing and healing. Well, 'cept for the falling down the stairs bit.
Good grief.....sounds like something I'd do. LOL

But oh.....I remember the paper chains and the cranberries and popcorn and dragging the tree outside for the birdies to finish off. *sigh*
Way long ago....something I remember each time we pull out this HUGE 'boxed' tree. *sigh* And I DO mean HUGE.

Himself is big on holiday lights--and this year, for some reason, it's been minimal. Though, yaknow....LOL....it's EARLY and I noted three huge boxes in the basement which have been dug through. Lights are along the roofline and the carport--and I see he's dug out the wreath lights (MY job!). Yup....LOL...more will happen!

I haven't put up a Christmas tree in many years either - not since we left the east coast and came out here just the two of us. It was always a delight when our son was young and the parents came to visit and there was a family to entertain but when we came here I left the old ornaments behind in storage including some that were on the tree at home when I was little. So I know what you mean about this being a very momentous decision. It's a sign of hope and love blooming in your heart that's so big you must show the world. May your lights brighten the hearts of all who see them

I hope you recover from your injury quickly. After all, Harold will need some help getting up there after all this time :-)

I so hope that you're feeling a little better now

good news about the tree and the lights!

I'm looking forward to the story of Harold

paper chains are excellent, as are cranberry and popcorn strings

and a real tree will smell wonderful (and if you have a fire, you can throw the needles on and they'll crackle and spark and smell even better!)

We used to always do live trees--hell we live in the Xmas tree capital of the world.... but a few major mishaps caused up to abandon the practice.
One time I got big time poison oak.... apparently the bare sticks remaining /unidentifiable in the winter w no leaves to know what it was, I wound up in the ER to get a steroid shot & had it on my hands & face.
Another time it was pouring rain & miserable & we had to wrangle with a gnarly tree.... the base needed trimming & we had to fight to get the fat base in the stand, cutting it back multiple times.
One year I finally broke down & bought a fake tree in an after holiday sale.
It does not drop needles. It does not need watering. It fits the stand w ease.
No poison oak!
Plus we can put it up early & leave it up late.
the tree has white lights... quite bright & we string just blue lights on it for a mellow effect.
A few years ago we voted to skip dragging out the ornaments.....(more work & time), so it was just the lights.

But nothing is quite the same as the scent of fresh greenery.... so we do a live wreath as a tradeoff.

Anyway, we keep the stand for the live tree, should we decide we must have alive tree some year.... but with work & stuff, it's less work to have it done in less than an hour.

So hope you mend from the fall...... hope the family helps to get the original plan in place & you enjoy a happy holiday w family in your new place.

A 64 ft stretch of Christmas lights - sounds like the US I remember. Among other things, a country of inexpensive pleasures. I recall one snowy late December evening in Clifton Heights, Pa, putting my two daughters into the car and simply driving round the neighbourhood, listening to their "oohs" and "ahs" as we passed one magnificent display of lights after another. Confirmation of my view that foreigners never get a handle on the US until they've spent time in the suburbs. Some may have said that these displays were simply proof of a willingness to spend; I preferred to think it showed a desire to please others.

I like your hard-nosed "weather just is" statement. It's particularly important here in the UK with its temperate (and, thereby, variable) climate. I made a decision after I'd lived in several places where the weather went to extremes - Singapore and, it must be admitted, Pennsylvania - never to complain about rain, etc. I am very much in the minority.

Sorry I haven't been about much. The novel restricts my blogging somewhat - now, nearly 30,000 words written.