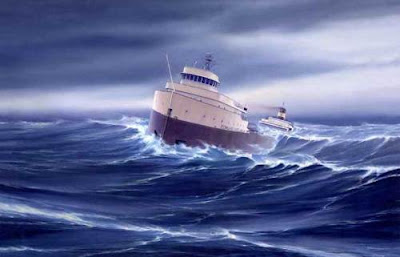 An artists rendition of the Edmund Fitzgerald.Artist unknown

Thirty four years ago today, 29 men went to work and died on the job. They were the crew of the ore carrier Edmund Fitzgerald. A rogue storm hit the Great Lake Superior and wrought havoc to “The Fitz”, as she was called. Among the dead was Allen Kalmon. I know Amy, his daughter. She is a friend of mine and lives in Ashland, WI, along the shores of The Great Lake Superior. A small model replica of The Fitz sat out on our Ofrenda for Days of the Dead. It has always amazed me that working people got up, went to work and died there that day. It has happened to other workers in other circumstances, but this tragedy always has touched me as significant on some other level that I cannot quite explain.

A few years ago, I think it was 2005, the thirty year anniversary of that fateful day, I went to a ceremony held at Split Rock Lighthouse State Park on the North shore of Superior, near Silver Bay, MN. The Autumn daylight had ended with the ringing of the ship’s bell 30 times. Twenty nine for the crewmen aboard the Edmund Fitzgerald and one more ring for all that have died at the mercy of the sea. As I left the parking lot and headed back West towards Duluth along what used to be US Highway 61, the radio played Gordon Lightfoot’s masterpiece, “The Wreck of the Edmund Fitzgerald” That night, the sound echoed, even within the confines of the car. The eeriness of the song, haunting as it is about tragic death, made me feel these men and their presence along the shore as I drove with the water close at my side along that stretch of highway.

This is a short piece of words from the son of Allen Kalmon, Bruce, in 2005. Amy came to one of our Days of the Dead celebrations years ago, the first year I had met her. She saw the replica of the Fitz and wondered how we knew her Father was on that ship. I had to tell the truth, and that being that I always honored all working class people through that shipwreck at each celebration for Los Dios. It was a connection, a coincidence, and as I remember November 10, 1975 and the gales of November, I think of Amy and others who lost loved ones and friends on the seas.

Funny to think of a day with 100 mile per hour winds, snow and sleet heavily weighing on guy lines, hatch covers blown off their moorings on a beautiful day such as what I am experiencing here at home today with temps in the 50’s, bright sun, calm wind and a freshness in the air, a sweetness. And a boat, a 730 foot long boat, loaded with 26 thousand long tonnes of taconite bound for Detroit bobbing and dipping into the Greatest of all lakes, Superior, like a dried Autumn leaf in the ocean.

Living somewhere around the Great Lakes all my life has been overall a wonderful experience for me. I have such a respect and reverence for the energy filled water. I’ve gone out in storms and tried to watch, but nature doesn’t let me focus, it blurs my vision of the waves. One night, when we lived in Duluth in the Winter of 1994-95, we heard that the Arthur M. Anderson, the other ore boat on the same track as The Fitz that fateful night, was coming into harbor. These comings and going were posted in the newspaper and on a simple chalkboard near the harbor entrance at the Coast Guard station located there.

We went to watch the big ship come in. We stood there, seeing it’s lights from a long distance, then watching as it slowly crept between the markers into the harbor and under the famous Duluth Lift Bridge. Knowing this was the ship that followed the Fitz and received it’s last radio transmission, “We are holding our own.” delivered by Captain Ernest McSorely, skipper of the Edmund Fitzgerald.

I leave you with some photos of The Fitz and other ore boats, the Phillip Clarke, and the Gordon Leetch The Leetch nearing the entry to Duluth Harbor, the Clarke, that frequently comes to Chequamegon Bay to deliver coal to the generating plant in Ashland, making one of its summer runs. Also are some pictures of a May 2006 storm moving in at Saxon Harbor, WI, about 20 miles Northeast of Ashland on Lake Superior’s South shore. 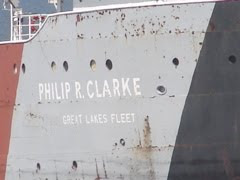 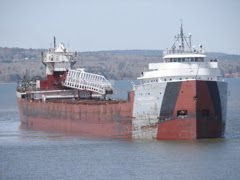 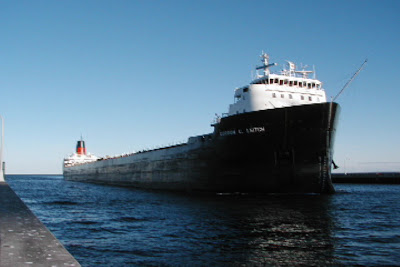 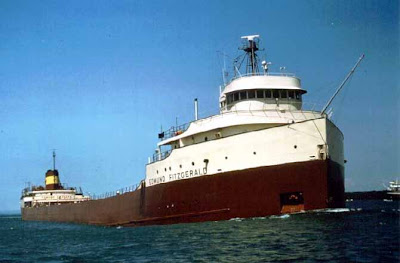 The Fitz, on a bright sunny day. 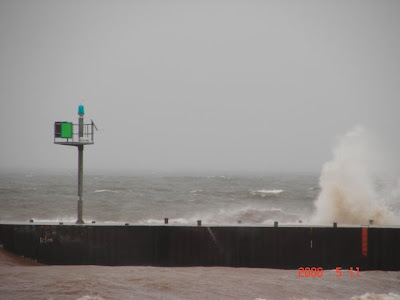 Crashing waves during a Spring storm at Saxon Harbor, WI. 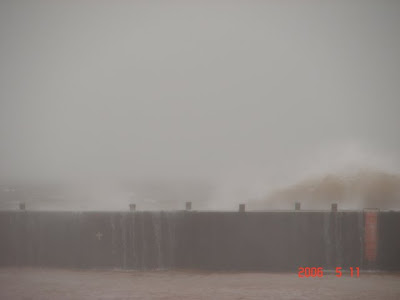 The following YouTube is a Sound Stage recording done by Gordon Lightfoot in 1979, four years after the great ship sunk, with some great collage of the early days of Great Lakes shipping and underwater shots of the hulk of the tomb of the twenty nine who died in November aboard the Edmund Fitzgerald.

It was amazing to be at the Lighthouse on the anniversary of the sinking. The ringing of the bells echoing over the big lake was so haunting. Damn, I love Lake Superior and I love you! great post! Mrs. Spadoman

this made me smile, and kinda sad at the same time

Deadliest Catch is The Teen's favourite show. . . I admire those guys


What a haunting memory you brought up for me.
I don't know why it rests so big in my brain.....I just know it does.
The Lakes have their own stories, their own rights, their own claim.
They bring me to silence and awe when I stand on their shores.

And thank you for the Lightfoot clip.
Well worth the 'click'.