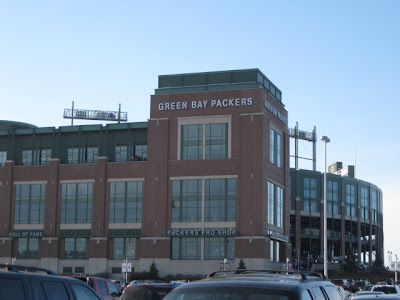 Lambeau Field, the stadium where the Green Bay Packers professional NFL Football team plays their home games is considered Hallowed Ground for most Wisconsinites, and for Packer fans all over. I've driven by the place a few times in my life on trips passing through or heading over to the city of Green Bay, WI, but I have never been inside. I had an opportunity to attend a game there this past weekend, courtesy of my Brother-in-Law, Nick. 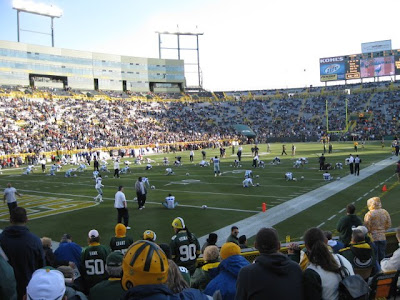 The Dallas Cowboys doing their pre game stretching on the field.

The odd thing about the Green bay NFL Franchise is that they are from a small town as compared to most teams being from a larger metropolitan area. They are also a publicly owned team and don't have a wealthy business person at the helm of the team. This day and age, with an NFL franchise being sold for about a Billion dollars, this scenario of ownership is rare indeed. 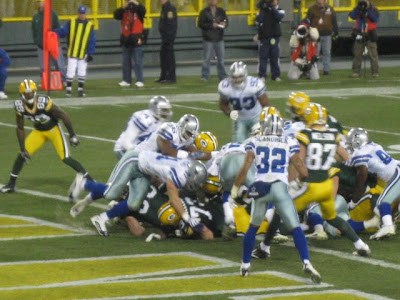 Goal line close up action when the Packers scored.

The stadium itself seats 72,601 fans. The day we went, attendance was announced at around 70,000. The seating is a traditional bowl shape and the seats are benches. Everyone, except those in the sky boxes, high above the general seating area, sits in this symmetrical bowl. It looked to me as if every fan has a good view of the field. Nick's seats were only eleven rows up and right near the end zone. You couldn't see all the details without binoculars, but generally speaking, we could see every play. What you didn't see was shown on large TV screens at each end of the stadium. These behemoth screens are called Jumbotrons and I believe developed by Sony. 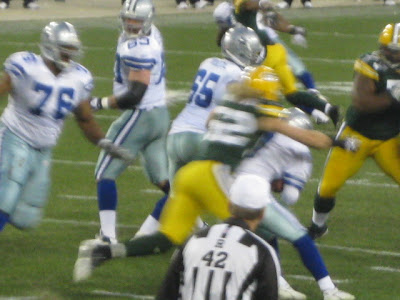 Cowboys Quarterback, Tony Romo, being sacked for a loss by the formidable Green Bat defense.

I like football. Green Bay is not my favorite team, but to be able to see a game in this venue made me a fan for the day. Besides, I dislike the Dallas Cowboys enough to cheer for the team playing them, even if it is the Packers. I've only attended four other professional football games in my life prior to Sunday's game at Lambeau Field. Three in Chicago watching the Bears many years ago, and one in Minneapolis when the Vikings played the Bears in more recent times of my life. 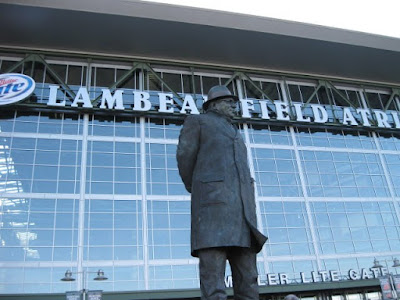 Statue of Vince Lombardi, a former championship winning coach of the Packers stands at the entry to Lambeau Field.
I took a few pictures and I've posted them here. It was a thrill to be at this historic stadium at least once in my life. I appreciate Nick for inviting us. A good time was had by all as the Green bay Packers beat the Cowboys with a very good defensive showing. The final score was 17-7, with Dallas's seven points coming with only 38 seconds of time remaining on the clock.

Hope everyone has a great day, today and everyday.

It was extremely interesting for me to read this article. Thanks for it. I like such themes and anything connected to this matter. I would like to read more soon.

You made my day...and my night!

<-- Packer fan FORever (and no doubt for always) (I do miss Mr. Favre though.)

It was a great game, of course. I'da waved at ya had I known you were there. As is, I was feeling bad for Tony Romo. What a nice thing and a great way to spend the evening.
Oh, but poor Mr. Romo...

Anonymous... Thanks for stopping here. Now, tell us who you are.

Mel.. Glad to hear you're a Packer backer. It was a good game alright. You shoulda waved, I'd have seen ya!
Thanks for coming by.

I,LTV... Well, for a very very very very good looking, damn smart woman, you should be able to tell me about at least one game that most men like to play involving a pair of roundish/elliptical shaped objects. As for 'Mericun football, don't worry, you're not missing a thing. Thanks for coming by.

Just goes to show... you can spend all the money in the world on a 'palace' and you'll still get beat by a team from a small town where everyone is invested in the team and the tradition.

Memories, memories of the greatest football match ever. Both those teams, the same venue and the same outcome. Late sixties NFL playoff game famous in itself and made even more famous in Jerry Kramer's book "Instant Replay". Prior to the game the Packers had installed tubing beneath the playing surface to keep the ground from freezing. Some form of insulant had been used to cover the surface and when removed the grass was in perfect condition. An hour later it was like concrete. Dandy Don Meredith dominated the game for the Cowboys and the Packers only won on a fourth-down QB sneak by Bart Starr, the vital block being thrown by the aforesaid Jerry Kramer. Meredith cried afterwards. I'd always favoured the Packers up til then (I liked their colours) but after this homeric struggle I went lifetime.

Kvatch... Thanks for stopping by. Yes, it is amazing, and this year, the Cowboys opened up that new billion dollar "palace" in Dallas. Doesn't make the players play any better.

BB... Yes indeed, that famous championship game called many things, but they dubbed it "The Ice Bowl" and that's the name that stuck. The day we went, it was perfect for fan and player. Sunny, light breeze, 48 degrees (F). Even in November it could have been colder, wetter and windier. I love to watch games on TV when the weather is extreme, but in person, I'm glad we lucked out.

Thank you for stopping by the Round Circle.