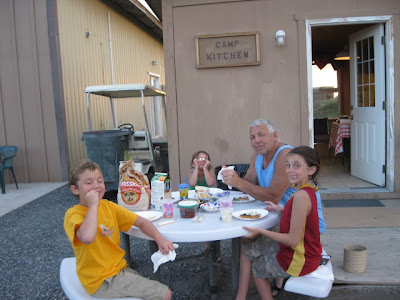 A bunch of happy campers.

I could have entitled this post, "Things that happened on the trip". Or I could call it the "Yoody Emergency Room Tour, 2009". Yoody is her nickname. My five year old Grand daughter. A Taurus, like me, (our birthdays are a week apart and we have celebrated them together for the past 3 years), and independent to the max! She loves life as I see it and jumps into living with both feet, fears nothing and trusts us as Grand parents totally.

It was hot, we were in Grand Junction, Colorado visiting a friend. The kids needed some relief from the heat and swimming was the answer. We headed out to Highline Lake. A man made affair west of Grand Junction near the small hamlet of Fruita. We got there and with only a little bit of fanfare set up two of those $7.88 collapsible chairs in a small spot of shade and let the kids have at the cooling water. We were there only ten minutes or so. The older two were in the water, sitting on the rope that divides the deep and shallow water. Yoody was near me as I was sitting on one of the chairs. Barb had walked toward a trash can to make a deposit.

Yoody ran towards the water. I heard a noise that gives me shivers even now to think of it. It was a "Konk" noise. I looked and saw Yoody, face down and completely prone, her head on the cement boardwalk that divides the sandy beach from the grassy picnic grounds. She rose up quickly, spotted her Grand mother a few feet away and ran to her arms. She started crying, crying hard. Grandma, or Na as she is called, picked her up and began the comforting. Barb walked with her in her arms to the empty chair next to me and sat down. All this happened so fast, I never did get up, but just watched. Once she was in the arms of her Grandma, there wasn't much I needed to do.

When they sat down, I said that I had heard a loud Konk and I wondered where and/or what she struck. She was still crying, and still crying hard. After a moment, she sputtered out the words, "My forehead". We brushed the hair away and saw this huge red egg that had formed. It scared me shitless. I couldn't believe Yoody didn't get knocked unconscious.

The crying settled quickly. I looked for ice. Barb went to buy a cold can of soda to use on the bump. We decided to gather up our stuff and take her to the hospital emergency room. I couldn't believe anyone could hit their head so hard, to make such a noise, and not have broken something or done more serious damage. A park ranger saw us and with his first aid experience, looked for dilation in the eyes and asked the concussion questions. We quickly stashed the chairs and other kids into the van and took off for Grand Junction and the hospital, about 15 miles away.

On the way TO the lake, I was stopped by the Colorado Highway Patrol. I was speeding, 72 in a 55. The trooper asked for registration, license and insurance proof. He checked things out. I was sure I was going to get a ticket, but he returned to my van with my papers in hand and just said, "Slow down". I didn't get a ticket that I certainly deserved. Now, I had an injured little kid in the car and I was scared. I once again drove over the speed limit. Luckily, this trip back to Grand Junction, I saw no troopers. 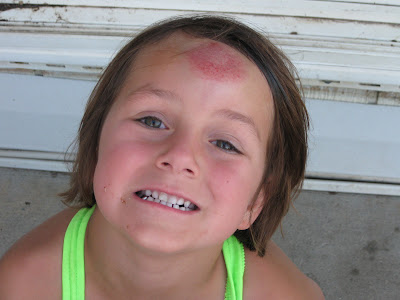 We got to the emergency room and had Yoody checked out. There was absolutely no injury that could be found with the innards of her head. The doctor asked if we saw something or if the child exhibited some behavior that was unusual, or were we just taking precautions by bringing her into the hospital. Barb told her the latter and she said Yoody would get some black eyes. The hematoma on her forehead was the size of a silver dollar. When Yoody raised her eyebrows, the hematoma showed a place where blood came to the surface and it looked exactly like a smiley face. Yoody named her new bruise "Eggbert", in honor of us calling it an egg on her head.

Eggbert lasted for a week or so before turning into a small scar. We called Eggbert's name every time we did roll call right along with everyone else's name. She never showed signs of any pain or discomfort from Eggbert other than to cry hard when it happened. I still shiver when I hear that sound. And I am so grateful that the higher power or whatever force that governs these things allowed her to be okay.

That happened on Sunday, July 12th. On Friday, July 24th, I was sitting on a lawn chair with my friend Tony at his house up in Carlotta, CA. We were gazing into a roaring fire and talking. He heard a noise. I didn't hear what he heard. I looked in the direction he was looking and saw my son-in-law speaking to one of the kids. Next thing I know, said son-in-law, John, was in front of us asking Tony for a container to put the broken glass in. He was cleaning up after Yoody had ran through a sliding door.

We sprang into action. Yoody was okay, we were told, but had a few cuts that they were attending to. I went into the bathroom and there was a compress on her little five year old foot. She also had a small cut on her arm and another behind her ear. I went with my daughter and Yoody to the emergency room at the hospital in Fortuna, CA, about 15 miles away.

That emergency room trip lasted from 10:00 p.m. To three O’clock in the morning before we finally got home. The hospital staff x-rayed the foot to see that there was no glass embedded under the skin. All looked good, it was bandaged and with a durabond bandage and instructions for care and cleanliness, we were sent home. The other cuts were superficial and would be fine with a small band aid.

Seems Yoody was carrying her Micky Mouse Star Wars Light Sabre, and when she ran up the ramp, she went right through the sliding glass door. The sabre must have hit first, for she walked right through the opening made in the glass by the sabre. She was standing there and crying because she thought she would be scolded for breaking the glass.

After a little comforting and attending to the bleeding foot, she was fine. She slept all the way to and during the hospital visit. I caught a few hours sleep and when we got up, started a day of activity on the ocean in Northern California. Yoody was running in the sand and getting her feet into the ocean often with no discomfort. Another bullet dodged as I thought sure she injured herself worse than she had. 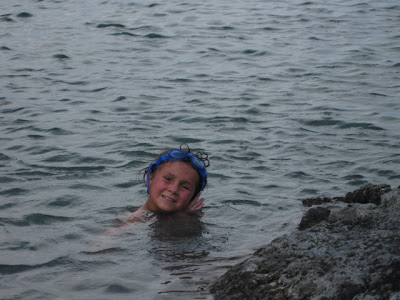 In between these two events, Yoody got lost while we were at Disneyland. For about five minutes, she was no where to be seen. We had split into three groups of getting refreshment or looking at something. When we all gathered together and saw she was missing, we didn’t panic, but rather started discussing our plan of action. It was moment later that a kind woman was escorting a crying child. The child bolted from her grasp and wrapped her arms around my leg. The woman said, “She must have found her family.”, and walked away.

Yoody used up a few lives on this adventure. We’re sure glad and fortunate that she didn’t get hurt worse than she did. I think back while writing this and can't understand our good fortune. Things could have been so much worse.

She’s pretty darn tough for a five year old, and handles obvious pain very well. No complaining or whining at all. I still hear that Konk sound and my legs shiver. Oh, and she named the cut on her foot too. Larry Laceration. We had to call his name at roll call too, every time.
Posted by Spadoman at 3:49 AM

Oh, my goodness! She is the cutest little thing I ever saw! Eggbert and all! You and Barb take fine care of those sweet kiddos. I can't wait until I'm a Vo (which is sort Avo, though not too much shorter, in Portuguese). :-)

This reminds me of a injury to the head that my youngest suffered at age 4, in Portugal. She lost her footing inside an old windmill and fell down a steep set of wooden steps. There were only four steps but they were very narrow and far apart. She landed with that thud you speak of on the wall below, slamming her head and little body into it. My parents were with me and we all freaked but got her to the hospital okay and everything turned out fine; similar to Yoodi's injury. The next day, she came down with the worst flu of her life. Poor thing. Oh, and the ER in the Portuguese hospital didn't charge us a thing for the visit, not even an ID. Wish that were the case here in our country.

Really enjoyed this post, Spado, and the pictures of your beautiful grandkids. I'm glad everyone is fine.

P.S. I'm glad you're using that follower's thingy: it helps to keep track of people's new posts and I miss a lot less that way.

Wow, that Yoody. What a girl!

That KONK sound is giving me the shivers too. I'm so glad that she's okay, and that you survived all the adventures as well. I love the image of her running up and wrapping herself around your leg at Disneyland. That's awesome.

OH MY! So glad she is ok. I did chuckle at the 'ran through the door' story although I'm sure it wasn't funny at the time. She is a cutie. So glad you made it home safe and had such a great time. Enjoyed the photo's and stories.

Okay....now I'm shuddering at the thought of the 'konk'.

So THIS is what I get to look forward to as a grandparent, huh.

I mean, I'm sure it gets easier with practice.
*laughing* Seems you get plenty with this one.

i think all of us blog buddies should take a collection up and get yoody a traveling helmet :)