I sat by the side window in the hallway and watched the back yard fill with people. Just about everything I owned was out there on large hay wagons the auctioneer had hauled to the house to display the items being sold. Items too large just sat on the ground. The farmers rallied around the tractors and mowers and equipment, the women around the boxes of kitchenware and knick knacks.

We had not recovered from the financial disaster of my heart attack and subsequent open heart bypass surgery. We had to sell a lot of our belongings to stay solvent a while longer. We kept things that were dear to us, but allowed the sale, by auction, of everything not detrimental to living in our home. We kept one set of silverware and one set of dishes. We were going to function, but without extra anything. This was in the Winter of 1988-89. 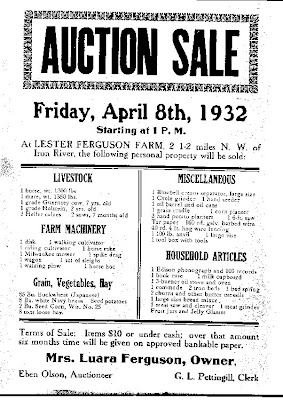 An old Farm Auction poster, similar to what we had in 1988.

I sat there alone that day because my oldest daughter, Maggie, was having an audition in Duluth, MN, some ninety miles North of Pine City where we lived. The audition was for entrance into a special arts high school that was opening in Minneapolis. Based on the New York Art school and made popular by the TV show, “Fame”, Minnesota was opening a school of this type on Spring of 1989 and daughter Maggie, a high school sophomore, wanted to go. 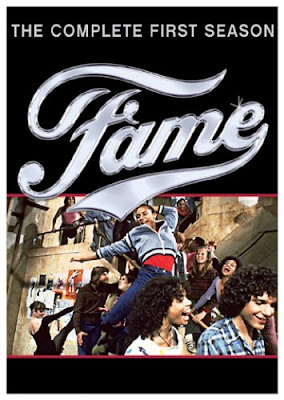 She had been involved with theater and was in every school play that was produced while she attended Pine City High School. She put her heart and soul into it. She tried to be the best that she could be and was always one of the prime movers when it came to being a thespian.

The audition took place on a Saturday. Just so happens, on the same day that Myron Haug scheduled and advertised for our whole house auction. I stayed behind. Barb took Maggie and her two younger sisters to Duluth so Maggie could attend the audition. This was the third in a series of applications she had to do. I remember her working so hard and doing all she could. She really wanted to get accepted into that new concept school. They were only going to have 75 students in that first class.

We waited a few weeks, but then the notice came and sure enough, Maggie was accepted into the new high school for arts education.

She was due to move into the dormitory for the Spring Semester. A sixteen year old, leaving home and attending a live in school, applying her chosen craft. There were other students, all with their dreams. Media Artists, painters, potters, sculptors, actors and actresses. All young kids. All pioneers of such a program.

The auction was over and we lived in the house we had built for ourselves for a few more months. But it was to no avail. We never recovered financially. We had just acquired the debt of building this homestead and furnishing it when I had this heart episode. We tried, but failed, and in February of 1898, filed for Chapter 7 bankruptcy. We were told we cold have kept the house, but I wasn’t too keen on living in the small town and having to face the banker, grocer and other people I had owed money to on a daily basis.

That was one reason to move away and abandon our dream, the other was the mother hen, Barb, not satisfied with the first born being in that school dormitory 75 miles away in the big city. We decided to give the house back to the bank and move to St. Paul. Barb wanted to keep a better tab on the new school and our sixteen year old daughter. We found a suitable apartment and moved early in 1989.

Turned out that Maggie, who we never questioned about her desire and drive to become an actress, was fine. It was Maggie herself who came home one weekend and told us that there were too many kids just wanting to party and live away from home and that they weren’t serious enough about their art. She wanted to come home and live and she did after one school quarter. She attended Highland Park High School after that and graduated from there in 1991.

We had made the move and the family was intact. we had hardly anything of our former selves as far as possessions went, but that was okay. We are a family. We stuck through it all. It got worse after that. Just six days after Maggie graduated high school, she was involved in a terrible automobile accident and lost her life. That changed our lives forever.

Yesterday, I was on line and an instant message popped up from a young old friend. I say a young old friend because Alyssa, my friend, is only sixteen, but she has been my friend for three years now. She told me she had been auditioning for Perpich. Perpich is the name of that arts high school now, twenty years later. Rudy Perpich, a former governor of Minnesota was instrumental in getting this project off the ground. When he passed, the school was renamed the Perpich Center for Arts Education 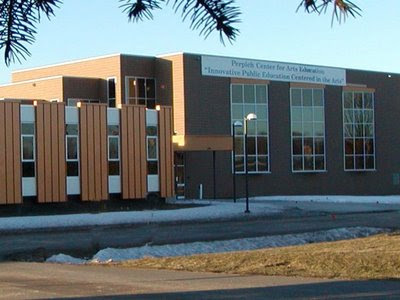 Rudy, who passed in September of 1995, was an a dentist and a politician. A member of the Democratic-Farmer-Labor Party, what Minneotans called Democrats back then, he served as the 34th and 36th governor of Minnesota from December 29, 1976 to January 4, 1979, and from January 3, 1983 to January 7, 1991. This was the longest tenure among the state's governors. He was also the state's only Roman Catholic governor and the only one to serve nonconsecutive terms.

It was his vision to have such a school in Minnesota.

My friend Alyssa mentioned Perpich and I knew exactly what she was talking about and quickly told her the story of my daughter being in the first ever class at that art high school.

Alyssa sent me the link to her media arts piece that she used as her audition. I’m going to post this at the end of this article for all to see. I am proud of my young friend. I believe it takes a certain resolve and a special talent to even apply for such a school. Not all kids are capable and not all kids are willing to do the work, to apply themselves, to put forth the effort. 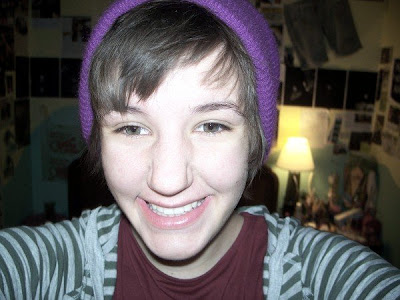 This is my friend Alyssa as she appears on Facebook.

I hope Alyssa gets in. And if she doesn’t, I’m sure she’ll proceed another way to make her dream come true. Earlier, just last year at the Minnesota State Fair, Alyssa showed me an art sculpture she created that won an honor. It was displayed among other works from other students throughout the state. After some looking, we found her piece. A wire affair of a seated musician playing a guitar.

I know that Alyssa has talent. I am also impressed by the fact that she certainly isn’t stereotyped into a niche of the common high school student. She is well read and quite open minded to learning about life as well as her school subjects. I was proud to have her march with me as we stood for peace at the Republican National Convention which was here in Minneapolis last September.

Good luck Alyssa. I hope you make all your dreams come true.


I was instructed to make sure I read the words on the sidebar describing this video. Here they are, in her own words:

Everyone has a face that acts as a window to who they are. A face tells the story of your inner most being. As you can see there is more than one face to this girl. She came into the world as an innocent ...

As I wrote this, I became aware of this irony. My daughter was in the first class that ever attended this school. It was innovative and cutting edge for its time in 1989. Now, 20 years later, the governor of Minnesota is entertaining the idea of closing it down as a way to cut the budget for the state. Alyssa may be a member of the last class to attend this school.

Here's the story about the possibility of closing:
Posted by Spadoman at 6:32 AM

You tell of a very bad time in your life with such clarity and truth. And it does change your life forever, doesn't it? It's always before and after. God bless you and yours, Joe.

With you as a supportive friend Joe, Alyssa has one more thing going for her. Cheers good sir, and peace be with you.

You've had quite a life so far. It's nice that you can use your experiences to help others.

Is it just my mind playing tricks, or does Alyssa look a bit like your daughter? I remember the photo you once posted, such a beautiful face. I hope the school stays alive & hope Alyssa finds a place there.