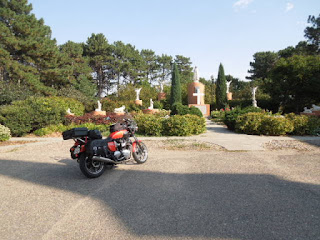 Today is Day 10 of the 12 Days of “A Virgin a Day”. This series started on December 1st and will culminate with the Feast Day of Our Lady of Guadalupe on December 12th. This is the third year that I have been a part of this wonderful project that was started by my friend Rebecca on her blog, recuerda mi corazon. Go there now and see the many blogs that are participating and telling stories about Mother Mary in her many forms of existence.

My story today is simple. While traveling to New Mexico by motorcycle last September, I passed through Arapahoe, Nebraska, a small town located on US Highway 34 and 6 in the South Central part of the state, West of Grand Island. I usually follow the smaller two-lane roads and finding a Shrine will always lead to a stop, if not to see the Shrine itself, but to get some rest where I can walk around a bit and stretch my legs. 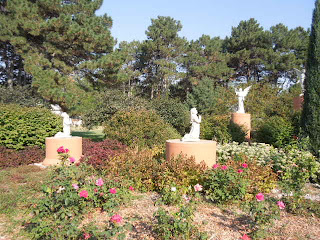 Arapahoe is the home of another Our Lady of Fatima Shrine. The one I wrote about for Day 6, the Fatima Family Shrine that I recently passed by in Alexandria, SD, was another small town rest stop. Our Lady of Fatima seems to be very popular as my Google search looking for this one turned up that there are many such Shrines to Our Lady of Fatima throughout the world.

This one, in the small town of Arapahoe, population 1023, was to keep a promise made to God by a US Army Chaplin, Father Henry Denis, when he was a prisoner of war in Germany during World War II. His promise was to build a Shrine if he were to survive the concentration camp and the war. 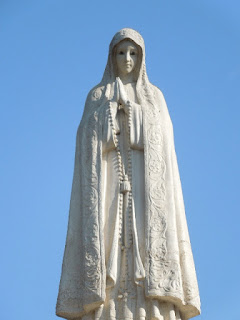 His first parish was St. Germanus Catholic Church in Arapahoe, so that’s where he started to build the Shrine as promised. It was completed in 1958. 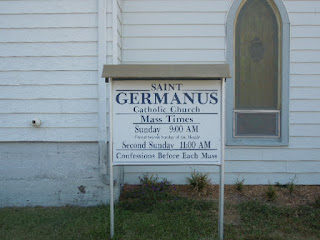 The Shrine sits on the grounds of the church and is neatly and compactly tucked away. It was a good place to stop and take a rest from riding that hot day. Temperatures were over 100 degrees. I remember sitting in the shade and sipping water before I rode off to the West. I took a few photos and had one of these 12 Virgin Days on my mind when I did. 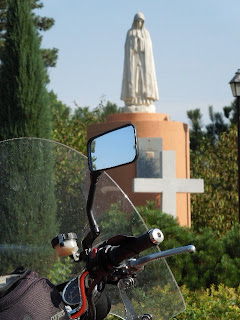 We are still on the road. This morning, I am in Sedona, AZ. Traveling to Albuquerque today via Canyon de Chelly National Monument.

I used to live (almost) next door (there was a park in between) to Our Lady of Fatima church. We were on the edge of the Portuguese community and were constantly being taken for one of them. They had many colourful parades when they would carry the statue through the streets and decorate her up.

How wonderful for you to be posting your trip that includes the Beautiful Mary statues. Thank you and safe travels in Sedona, AZ. Enjoy, take care.

Wow--what a testimony to the treasure of the small towns of the world. What a pretty little spot for a wander around. And the statues are well surrounded there. I can imagine a layover for a wander about and the feel of that Nebraska heat. OH boy.....LOL Ah, but well worth the stop. And how cool that even then you were thinking where to post the photos!

Safe journey......and hopefully an off the beaten path adventure or two, eh?! :-)

You gather such great stories in your travels, Spadoman!

Handmaid of the Lord

Beautiful pictures and story - I love the last picture!