Visit to an Old Haunt

The Monday Mystery Tour feature used to get regular attention here on Round Circle. I'll try to revive it by posting this story of a place where I lived, Ashland, WI,  and a visit there some six years later. 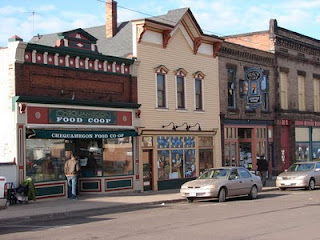 Peace to you all.

I wrote this sometime in December of 2006. I returned to The Black Cat in Ashland, WI last weekend, August of 2012. I get to and through Ashland once in a while. Sometimes on purpose, sometimes as an aside to a trip I might be on.
This time, I saw Amy. She was just closing her stand of art cards and jewelry she makes and sells at the Saturday Morning Farmer’s Market. The Farmer’s Market is held in the parking lot adjacent to the Ashland Bakery, across Chappell Avenue from the Cat.
I walked across the street and stepped into the Cat. Tara was there and recognized me. I got a smile and a big “Hello”. I hadn’t been to Ashland in a while and hadn’t seen Tara in a really long time. It was great to be remembered. While I stood in line to order my Americano, (some habits are hard to break), I saw Sue come out of the back room. We caught each other’s eye and smiled and said, “Hi”.
Behind Sue was a good friend. Her name is Cheryl, but I only know her as Marsha. I call her Marsha, Marsha, Marsha as if I’m talking to Marsha Brady of The Brady Bunch fame. We stood in line, talking, hugging and smiling. I ordered my coffee and a cinnamon roll and went out front and grabbed a table on the sidewalk.
I was joined by the group of motorcycle riders I was riding with this particular weekend, then Sue and Marsha, Marsha, Marsha came out and we got more chairs from inside and had a regular circle that spread almost to the curb. I asked Marsha, Marsha, Marsha about Rick and Wayne and the others, but lately, there had been no sightings. I haven’t seen or written an e-mail to either of them lately myself.
It was funny as I think about it. Sue wanted a bagel. She had to go across the street to buy a bagel, then bring it to the coffee shop for them to toast it, put it on the plate with the cream cheese and serve it. I wonder if she got a discount. The funny weird part about this is that Darl, who I mentioned in the original story, the one who bought the ciabatta roll from the bakery into the coffee shop every morning, used to date Sue. What syncronicity. Both Darl and the woman he dated get their bakery and hand carry it to the coffee shop. We lost Darl a few years ago.
As we sat there and I introduced my motorcycle riding friends to my Ashland friends, Liz got out of her car to shop next door at the co-op grocery. Liz was a barista here at The Cat years ago when I used to live in Ashland. She was the morning person and chose the music CD’s that played when I walked through the door. We noticed way back years ago that we had a very similar eclectic taste in music and became friends quickly.
Liz had quit the coffee shop before I moved away from Ashland. There was talk that she was going to move out East. I mentioned it and she shrugged her shoulders and said, “Oh well, some day I guess”. Then she turned the tables and asked me, “What about you? I thought you were going to move back to Ashland?”
My response was similar to hers, “Some day I will!” Then I asked Marsha, Marsha, Marsha if I could put a small RV trailer next to her garage off the alley and plug it in so I’d have a place to stay when I came to visit. She said, “Sure”.
It was a good visit to Ashland. To see the friendliness and slow-to-change day to day world of a small town. I liken it to Mayberry. Every time I get to Ashland and go to The Black Cat I feel this way, like I really would like to move back there, or at least have a place so I can come back more often on a regular basis. Not too many of these holdouts left in the world. I bet if I showed up there more often, things would be back to normal in no time flat. I’ll have to see what I can do about it.

Thanks for the great read this morning. I truly enjoyed your past outing to Ashland WI, the first time and the second. So laid back and interesting. Very descriptive, why I could have been there too. :)Thanks for sharing.

Thank you for stopping by Gloria, and thank you very much for the compliments.

Awesome!
We all need a Black Cat to plant ourselves at for a cuppa coffee and a bit of 'family' time. How cool that you get to go back and rub elbows with that 'family'.
*laughing* I'm thinking they'd bring the power cord and plug ya in --and all you'd need to do is show up! :-)

I spent some time waitressing at a wee joint and enjoyed that same sense of 'family'......the kind you get to pick and decide it's good to let them know you--and it's reciprocated. I miss being a part of that. I miss that kind of 'people' investment, know what I mean?

There's a place here, in this bitty town, that does coffee and sandwiches--but it's complete with wifi and people are focused on what's on the screen and notsomuch what/who is next to them. Not the same thing, huh......but maybe...MAYBE it's about creating what you want and daring to?

Thank you for stopping by Mel. I find these blogs to be a lot like the family at the coffee shop. People I've never met in person sharing life's stories and moments.
One thing about The Bl;ack Cat, the owner would never put in WiFi for the exact reason you mention. She didn't want the place to become individualized. She wanted the interaction amongst the customers, and Ashland is a small college town with Northland College there!
Be assured, you have plenty of people investment on your blog. I invest there so much, I am going to ask for a higher rate of interest! LOL

This is a nice comfortable story, makes me wish i had a place like this to go to.....or....rather the ability to hang out as i'm sure their are places like this near me, i just can't with my son. He keeps us confined to home.....Ok, as i keep writing i realize i probably wouldn't even if i could as i spend my lunch hours alone purposely.... But regardless , it sounds lovely!

Thank you for stopping by my Falling friend. Your dedication to your son happens for a special purpose. Perhaps your lunch hours are alone in a crowded world. You are a part of it in whatever form your mind wants you to be.
Thanks you for the compliments. I appreciate your response to this story as one of comfort. As an after thought, I think that is what I might have been trying to achieve.
See over at Haiku My Heart later today, I hope.

Ya know, Steve, I'm not much for "reality" shows but if something like "Daily Life at the Cat" ever shows up of the tube, I'll be tuning in. They sound like a great bunch of people all drawn together by the same thing - great ambiance and greater coffee. The conversations can't help but flow.