It was Saturday April 28th when I loaded up the car and hooked up the trailer with my motorcycle aboard and headed West on the first leg of my latest adventure. The plans were to drive to California, spend some time there riding, visiting friends and playing music, then return home with a friend and his motorcycle in tow.

This was eventually accomplished. We had a great time once we got there, but getting there wasn’t without some drama. We had a flat tire blowout near the Wyoming/Colorado border along a less-traveled two lane road a little South and West of Rawlins, WY. State Route 789.
We were about 60 miles away from Rawlins, WY and traveling on our journey without a care in the world. The bike was solidly affixed to and riding on the trailer. My car, a new-to-me 2007 Mazda CX-9 that was purchased not one month earlier, was performing well. Using a bit more gasoline than I’d wanted it to, but driving quite nicely.

Not a car in sight, either way. I didn’t pass any, none passed me and none were seen headed North in the oncoming lane. In fact, we commented about how we had the road all to ourselves. I was traveling with my good friend Dave.
Dave is one of the people responsible for introducing me to Mrs. Spadoman way back in January of 1971. He also introduced me to his brother-in-law Hal, the friend we were going to see in California, as Hal is married to Dave’s sister, Ellen. With that established, all you really need to know is that I was not alone on this deserted two lane highway when we heard the muffled “POP” of a blowout.
Now I have logged in over a million miles of driving semi rigs for a living over the years and at least another million in my car or on a motorcycle traveling highways in the good ole US of A. I know that sound and I immediately touched the brake pedal to release the cruise control and started to brake as the right rear tire went down. It started making that flopping noise as I pulled over as far as I could to the side of the shoulderless roadway.

We came to a stop, got out and assessed the situation.

It was flat all right. I had a jack, and I had a spare. Changing it would be a chore as  the back end, packed with gear for our trip, would need to be emptied and the apparatus taken out and assembled to jack the car up. But the slope of the roadside would be a safety hazard. We had to decide if we should try to change the tire ourselves or call “The Man”.

I remembered I paid the big bucks to have AAA road assistance. And, I belonged to the upper echelon of AAA road service with the additional premiums I paid for the “plus” next to my name on my gold AAA identification card. I called triple A and talked with a representative from my home state of Wisconsin.

I was thinking, “Here I am in the middle of nowhere with a flat tire, but I am glad I have cell phone service.”

The kind voice transferred me to the Wyoming branch for the road service. I was told a tow truck would be at my location in about two hours.
Dave and I wrangled the spare tire down out of the suspended rack that resides under the rear end of the car. We decided not to try to jack the car up ourselves with our factory equipment as the ground sloped severely at the side of the road and there would be no way for the car to be stable. We waited for AAA.
I thought the car came with a full size spare tire. When I bought the car, I was told that the tires were newly installed. I thought I remembered the salesperson telling me the spare was new as well. It was new. A never-been-used temporary spare tire that is usually referred to as a doughnut spare.

Triple A came and changed the tire. They had the right equipment and did the job quickly in a safe manner. We were back in business and on the road. I knew these temporary spare tires had a limit as to how fast you can safely go. We were about 60-70 miles away from Craig, Colorado, a medium sized town that I was sure had a tire store. We took our time and never exceeded the 50 miles per hour speed limit that is clearly printed on the sidewall of the spare tire.
We got into Craig. Did I mention it was Sunday? And did I mention it was late in the afternoon on a Sunday? Did I tell you that there are indeed two regular tire stores, three auto dealerships, two car repair places and a gas station that sell tires in Craig, CO?
Well, this is all true, but they were all closed late in the day on a Sunday afternoon. Our only option was to get a motel room and spend the night. I’d get up early in the morning and find a tire and get our car repaired so we could resume our journey.
We wanted to get to Grand Junction, CO on that Sunday as I had a friend there that was going to feed and house us before we set off through the high desserts of Utah and Nevada. I called Sonya and told her we weren’t going to make it as we will be spending the night in Craig. Sonya and my middle daughter were friends and traveled all across the country for a year or so when they were just out of high school. Through the years, Sonya has remained a great friend not only to my daughter Alyssa, but to the whole Spado clan!

We did find a very nice clean quaint and rather unique motel in Craig called The Elk Run Inn. The young woman that worked the front desk was delightful. We were given a room with two beds and a complete kitchen that was located up one flight of the office. It came with a sliding glass door that opened to a large covered porch with a great view of historic US Highway 40. If I ever need to spend the night in Craig again, I would return and stay at the Elk Run Inn.
On Monday morning, earlier than the tire stores would be open for the day, I was ready to find a place to purchase a new tire that either matched my Michelin all season radials or came close in tread pattern and riding characteristics, that being, a highway tread touring tire. I set out and as the stores opened, I was the first in line.
“No such tire around here”, I was told. “This is mostly rancher country. You know, pick up trucks and all. We don’t get much call for that kind and size of a tire, so we don’t stock ‘em.”, was repeated by the tire stores, the car dealerships, the service garages and the gas station. 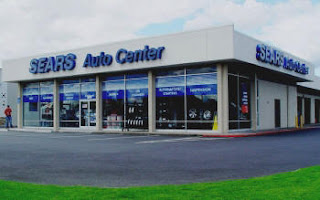 Of course they could order me one and it would be here tomorrow. I decided that even at 50 miles per hour, the safest and fastest speed I could drive the car on the temporary doughnut spare, we could be in Grand Junction, 160 miles away by late afternoon and I was sure we’d find a tire there. In fact, I called Big O Tire and Sears Auto Center and made sure one of those places had my tire in stock. They did, so, we left Craig and slowly drove to Grand Junction. 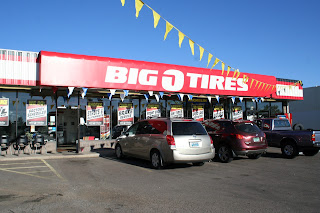 We arrived in Grand Junction by about 2 PM on Monday. We didn’t cause any accidents and weren’t in the way too much as we traveled at that slow rate of speed. Especially that part of the trip that had us amidst the 75 mile per hour traffic of Interstate 70 while moving along at a brisk m52 miles per hour!

My friend Sonya met us at Sears and as the car was getting tires, she took us out to lunch at a pizza and sandwich shop that her significant other owns called Diorio’s Pizza and Subs.

After a delicious lunch some great conversation with an old friend, we returned to Sears Auto Center to retrieve the car. Proudly donning a full set, yes, four brand new GoodYear Assurance all season radials, mounted and balanced.

I needed one tire to replace the one that blew out. I then thought it prudent to replace them in pairs so they would match. Then, I though I should replace them as a set and did so. Over $1000.00 and a day later than when we had the flat, we were on the road and drove to Delta, Utah where we spent the night.
I kept one tire to eventually mount and use as a full size spare. This tire carcass still sits in my garage and awaits attention. The other two “good” tires are at Sonya’s place in Grand Junction. I told her I would send her the tire information so she could list them on Craigslist and hopefully get a few bucks for them. I need to do this. I just remembered as I am writing this. Sorry Sonya, thanks for being so patient with me.

The temporary spare was put back into its holder beneath the rear end of the car. I have driven approximately 9500 miles on the new set of GoodYear tires and I am pleased. And of course, I have no trouble with them since I spent an additional $100.00 on the tire hazard warrantee.
This was the tire fiasco. Nothing money couldn't fix I guess. We got to California one day later than we wanted to, but we made it, safe and sound and had a wonderful visit. That is, until my motorcycle started giving me fits, but that’s another story and since it hasn’t ended yet, I’ll save telling you about it until it is resolved.
In the meantime, enjoy your day and be nice to each other.

Why do flats always happen when it seems most inconvenient?

I've changed so many flats in my time it's crazy.

Geeze...this isn't good.
Or maybe it's a good enough reason to add TO the collection so you wouldn't be lonely while Jack was away?

*laughing* Makes sense to me!!

In the meantime--you SERIOUSLY drove that far on the donut?!