These photos are from places very dear to my heart. See the postcards from others at recuerda mi corazon. 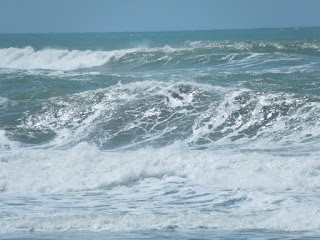 I'm still trying to catch up with posting photos and tidbits about the traveling I’ve been doing over the past month or so. If you include the quick run down to New Mexico in mid March to pick up my motorcycle that was stored there over the Winter, I've got almost 10,000 miles in by June 3rd. I'm home for a while now, and although very busy with home improvement projects and spending time with the family, I want to post some stories and photos of my travels.

While in Northern California, I went and visited some old haunts. No trip would be complete without breakfast at Gill’s By the Bay.  Gill’s is a friendly little shop on Humboldt Bay at King Salmon. King Salmon is the name of the area where I once owned a mobile home. A lot like Jim Rockford’s place. (James Garner played Jim Rockford, a private detective who lived in a trailer home on the ocean somewhere in California in a TV series called The Rockford Files)

I used to walk to Gill’s as it was less than 100 yards from the front door of my trailer home in King Salmon. King Salmon lies just South of Eureka, CA. It was quite the mecca for sport fishing of the mighty King Salmon that once were plentiful along the rugged Northern California coast.
When I owned the trailer, it looked a lot cleaner than the photo that I took last month shows. I didn’t have boarded up windows. Not only did the new owner board up the windows, he painted the others with white paint. It is now a white tomb, completely enclosed. Might he have an enormous light bill for what grows inside? Maybe so. The Grow-Your-Own is part of the economy in that part of the country.

My trailer was a 1955 Executive 50 foot mobile home made by the KIT manufacturing Company in Long Beach, CA. You may have seen one exactly like it if you ever saw the movie “The Long Long Long Trailer” with Lucille Ball and Desi Arnaz.

I loved Gill’s for a cup of morning Joe. There was always some activity going on. Boats entering and leaving the docks or clammers on the bar at low tide. The pelicans were regular visitors as well as a great view of Field’s Landing and the lumber activity going on there, complete with tugboats and barges filled with logs.

One of the specialties at Gill’s was the Hangtown Fry. What is a Hangtown Fry you ask? The story goes like this:
In the town of Placerville, CA, over 100 miles away from the North coast city of Eureka, three men were hanged on the same oak tree at the same time. It was known as Hangtown before it became Placerville.
The Hangtown Fry is a story about a miner that struck it rich. He went into a small eat shop and wanted the most expensive item on the menu because he had been eating beans for the past few months and was sick and tired of beans.
The cook told him he had eggs. These were expensive because in those days, they were very hard to ship without breaking them. He also mentioned bacon. It was expensive because it had to be shipped from the East. He also said he had Oysters that he could bread and fry. Since they were a delicacy, they were expensive too.
The miner said he’ll have all three and the concoction was made. The Hangtown Fry was invented. I’ve had it here and there throughout the years, but Gill’s is the best in my opinion.
A plateful of eggs, done fritatta style, smothered with fried onions and well-done green peppers, topped with three large Humboldt Bay oysters, two slices of bacon and served with Gill’s signature fried spuds and sourdough toast. Oh, and home made plum or peach jam in little jars!

Another place I had breakfast, not on the same day of course, was the Eel River Cafe in Garberville, CA. The similarities to the local Dish and the Spoon Cafe where I have my morning java when I am home in River Falls are the presence of the holstein cow and holstein cow colors of black and white.
This is a photo of the wall paper in the men’s room. Like the Dish and the Spoon, they have quite the collection of cow memorabilia and black and white accents throughout the store. Good food at each as well.

No trip to the North Coast would be complete without visiting the ocean. The pounding of the great sea on the black sand is a very cool spectacle. There are a few places to surf, just a few, and not too many sheltered enough for a swim. These waves are enormous and the sound is incredible. I did pick a few rocks and filled my pockets.

I met with two beautiful people from my past. Nikki and Maggie. Nikki lives near Portland, OR but was visiting Eureka at the time I was there. Maggie lives in Eureka, but hails from Minnesota. I met them both during the Longest Walk II in 2008. Nikki is an editor and writer for Spot Magazine out of Portland, while Maggie is busy taking care of her newborn child, Margo.

These two are just a couple of the many great friendships I made while on that walk. It was great to catch up with them and visit at Ramone’s Bakery and Cafe in Old Town Eureka.
Ramone’s has some wonderful baked goods to enjoy with coffee, but I opted for a freshly toasted delight at Los Bagels, right down the street. 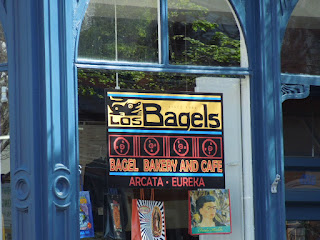 Los Bagels is the marriage of mixed heritage, but I am not sure if it is husband and wife or Mother and Father, one being Jewish and the other Mexican. All I know is that they have the best bagels anywhere and they celebrate Los Dias de Los Muertos while all the while having Dreidels for sale on the counter. 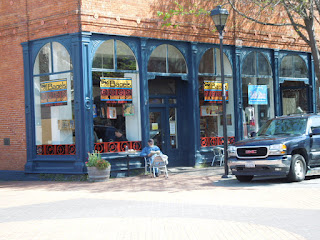 Sounds like all I did was eat and sit around drinking coffee. That about sums it up when I wasn’t riding the motorcycle or in Hal’s studio playing music. I did have time to get the car washed at a fundraiser the Fortuna High School Band, of which Hal and Ellen's Grandson Bryan is a member, held to raise money for their trip to San Francisco over Memorial Day weekend to play at the 75th anniversary of the dedication of the Golden Gate Bridge.

One of these days I’ll have some spare time and I’ll get some of the stuff we recorded on the blog via YouTube. My friends are great musicians. It will be worth the wait when I finally get to edit the audio and video.
In the meantime, thanks for your time spent here.

we have some passable thai and italian places here- and lots of good bar food :) i don't know much about local color as i don't tend to hang out downtown- but do feel free to stop by here some summer :)

Good morning, Steve. Enjoy this leg of the trip with you. I love the NoCal coast and now have two more eateries on my list of places to visit.

thanx for the tour....always love to learn about and 'see' different places

Incredible! I have relatives in Fortuna, Weott, Miranda, and Garberville. I've probably eaten at that place in Garberville. Lots of memories. My father used to fish the Eel River, among others. He'd bring home 50-60 lb salmon. We had salmon stored in all our neighbor's freezers back in the day. To this day, I no longer eat salmon.

How I love a good travelogue and you do it up right! We will be traveling together in a few months, what stories we will have to share!

I got a laugh when you said another place that you had breakfast but not on the same day of course haha. The Hangtown Fry looks yummy. Thanks for sharing part of your journey, The Long Long Long Trailer is one of my favorite Lucille Ball movies! Peace to you!

you are such a great story teller spadoman! this was a savoy and refreshing journey that took me home to my life in mendocino. thank you for stirring your memories, and mine!

yes, soon a soulful collection of us will be traveling together to celebrate dia de los muertos together! i am thrilled that you and barb will be a wonderful part of the mix!

I read this and then scrolled to the next down.

Suddenly the smartie pants remarks I had about that breakfast.......nonimportant.

Your "white tomb" photo is one of the reasons that I try very hard not to go back to places where I once lived. It would break my heart to see them in their present condition.

Do You Hear the Joyful Sound?

I just loved your entry today recounting bits and pieces of your travels and the Hangtown story. I have a writer friend in Eureka and you can follow her 77 words at: http://sharons77words.blogspot.com/. You have had such a multi-faceted and interesting life, Joe. I'm just glad you are feeling so much better.

I could live without the breakfast (I'm a yoghurt and fruit fan) but the ocean and sand and music sound great.

i traveled up to no. california today with you while sitting right here at my computer. i enjoyed every minute of it. love the way you tell a tale.

I can't believe you have put 10,000 miles on your travels already this year. Amazing and wonderful. And may I say - completely entertaining.:)