This is the weekend, time for Shadow Shot Sunday. A great meme of photographic and other expressions from around the world. If you’d like to see more Shadow Shots and find out how to participate, please go to Tracy’s Hey Harriet Blog. 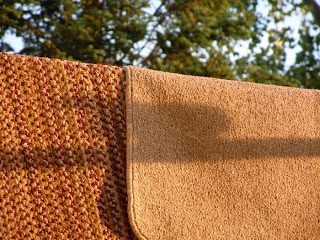 The sun is rising early this time of year. Here in the Northland we have full sunshine by 5:30 AM and it doesn’t set in the Western sky until after 9:00 PM. The heavens stay lit until ten PM or later.
It was one of these early mornings, when the sun was casting long shadows, that I saw this image on the throw rugs that were hanging on the deck. From my easy chair, while sipping some fresh brewed coffee, I had not a clue as to what was creating this particular shadow.
I wasn’t so curious about the “blob” seen on the rugs as I was about the long “stick”. I couldn’t figure out what was creating this amazing shadow. A power line? The dog run? What?
I grabed my camera, always at the ready, and snapped a few photos when I realized that it was the mourning dove, one of two that come to the trough feeder every morning here at Spadoville. 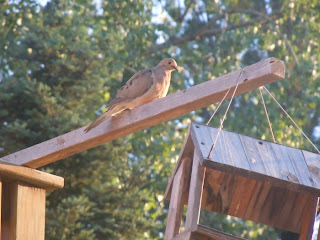 The bird was standing on the yard arm, (yes, all Pirates have a yard arm in their yards and I was definitely a Pirate in a former life), in that early morning sunrise. 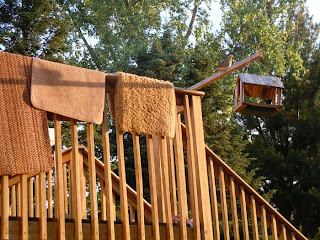 Glad I captured this one. I found it to be unique, basically becasue I didn’t know what it was and what was making it a shadow in the first place.

Lovely colour for the morning sun, and lovely shadow the lone dove is casting. Happy SSS.

Live is full of happy little surprises isn't it?! Things like this can make my day! Only... we have grey skies in Holland lately... the weatherforcast predicts sunny days and hight temperatures though, let's hope the sun comes in soon, I can do with a little sunlight!

A pirate in a former live huh?! Ha, I picture you with a ponytail held together with a small, black velvet ribbon! Or maybe like Pippi Longstocking's dad? (Know him?) Keep on chasing shadows and enjoy your Sunday!

He`s casting a beautiful shadow at the loveliest time of day. So peaceful.

Love, love, love the mourning dove in the sunlight!!

Have a glorious week way up North!!

Well hello there Joe : )
Ah .. investigating the mystery shadow !
Yes the "yardarm" has to have space some where in all gardens I think .. because we all know how pirates love treasure and what greater treasure than plant and wild life right in our own gardens?
Mourning doves are such sweet gentle birds .. I love watching them too.
The chickadees have been such a surprise and such a gift .. how could one not appreciate them ?
Thanks for visiting ;-)
Joy

Good capture! I'm glad you figured out what the was casting the shadow, the hunt makes a good post!

Thanks for your comment and educating me about native teepee construction; I learn a lot from my blogging friends!

What a lovely and wonderful surprise. A morning dove casting a shadow is always welcome in my yard and the shadow of a good friend drinking a fresh brewed cup. Wish you were here so we could have a chat. Think of you often.
A pirate fan,
Noelle

what great colors and the shadow is the icing on the cake!!

Great capture of the dove. A soft, pretty photo.
Sipping coffee on the deck sounds lovely. :)

Why, you must have said to yourself 'Dove? Dove c'è?'

The days are long this time of year. I tend to get up with the sun which this morning meant 5:30 here, too.
I'll often take a look when I see a strange shadow, "what is there? I wonder.

I love that you present a story with your photos, in the photos themselves and with your prose. and I love your curious mind. happy SSS, and have a fun week in Spadoville.

Well, that's what they're called in this backyard. All of 'em are Dora's...and they're all fun to watch as they blunder their way through their landings with a 'uh huh......meant to do that!'. LOL They're so silly. Not the most graevul in take offs and landings, but much fun to watch.

OH!! And you have a yardarm!!
You're such a lucky little piratey fella!

Ahoy there matey! A yard arm, eh? Geez....I'm feeling like a lame pirate I guess! But, what a cool shot!! Those doves are partners for life. For better or worse!

Fun to see shadows in the daylight and then figure out what is creating them. Nice one
Hope you had a great Sunday.
DJG

Oh those early morning shadows. I believe sunrise is just before 5 am here and I wish my particular sleep problem worked the other way round so I woke early instead of being up late.
I have some trouble imagining you as a pirate until I remember the big kind guy in the galley who none of the ships crew will offend and who somehow stops the mad captain from making the worst decisions and who rescues drowned cats and frozen sparrows and adventuring waifs. (and who hangs bird feed from the yard arm :)