Another trip under my belt
Things happen fast here in Spadoville. I was explaining the concept of spontaneity to the kids the other day. I had asked them if they were hungry one morning. They answered the question with an emphatic, “YES!”

I told them, “Get dressed, we’re going to the South Fork for breakfast.”

This was spontaneous. We didn’t plan the trip out for a meal in advance. The thought happened and we acted on it immediately. That’s what I think happened when I took this latest escapade to upstate New York, Utica to be exact.
As many of you know, I love motorcycles. I have two, my 2008 Triumph Tiger and an old 1973 Honda CL 350. I was planning on doing a few things to the old Honda and next time I go to the RV down in New Mexico, I would haul the bike down and just leave it there so I could have something to ride when I’m down there in the Winter.
This is still an idea, but it may have been trumped by another idea. You see, sometimes when I’m sitting at the computer in the wee hours as I am prone to do, I read motorcycle forums and motorcycle classified ads from a variety of sources.

This usually doesn’t get me in trouble as I resist buying more and more motorcycles for the stable, but this time I saw a beauty I had to have.

Besides that, my mind is uneasy this time of year. I can’t believe it has been 20 years since that fateful day when our oldest daughter Maggie was killed in an automobile accident. Maybe it’s this restlessness this time of year that prompted me to be on the road. I just don’t know, but I recognized the anniversary date on June 8th.
I was on Ebay, looking through the Triumph motorcycles for sale section and saw this 2008 Scrambler. The seller had done some enhancements to the motor and added some doo dads that made this thing look sharp. I loved the color combination and really liked the scrambler platform as an off road/on road type of bike.

I bid on it, and thought for sure I wouldn’t be the highest bidder, but I was, and the rest is history.

The bike was in Utica, NY. My Mapquest information said 1100 miles from here to there. I logged 1097.8 from my front door to the building where it was housed.


I usually make these trips much more leisurely by using the two lane highways, the roads less traveled. But I needed to get back quickly and didn’t want to spend a lot of time traveling. I was on a mission. I used the Interstate system pretty much all the way except for the first two hours from home along US Highway 10 in Wisconsin.
I saw some remarkable landscape as the hot sun made its way over the tree lined farmlands. Rivers and lakes abound. I saw eagles, hawks, crows and blue herons, not to mention the mourning doves, (or are they pigeons?), walking along the rooftop of an old abandoned homestead. 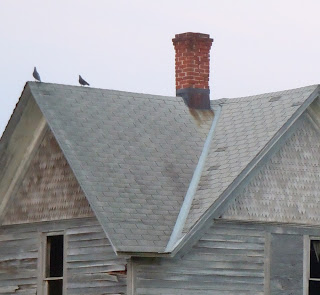 I left very early on Tuesday morning. The heat wave had been revving up and this day and the next were going to be scorchers. I put in 14 hours on the road that day and got a motel room in Erie, PA by 7PM Eastern time. A good meal at the Quaker Steak and Lube and I was all in by nine thirty. 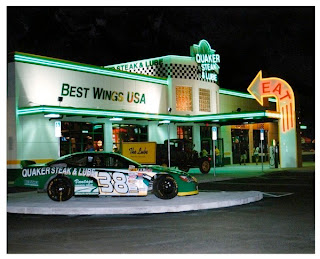 The next day found me doing another 14 hour day by driving to downtown Utica, picking up and securing the bike in the back of my van and heading for home. I came to rest at Sandusky, OH at a cheap ass Motel 6. I did get a decent meal in Cleveland as I passed through there at dinnertime. I stopped and ate at Dave and Busters and watched a little Stanley Cup hockey. And the van performed admirably by averaging almost 18 miles per gallon! 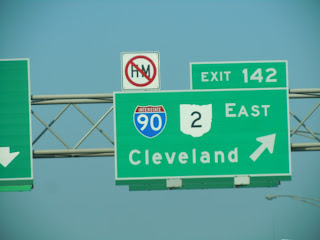 I did have a picnic basket with me. Sliced turkey and some good bakery rolls to make sandwiches. Fresh grapes, hard boiled eggs complete with Cholula hot sauce and my newest favorite, Greek yogurt. I ate from the cooler every day and bought only one restaurant meal daily. Between getting great gas mileage, (It is a full size van with a V-8 motor), and not buying meals, all I had to expense was the tollway fees and lodging. A pretty thrifty trip as they go.
When I got up Thursday morning, I lingered a while thinking there was no sense of urgency to get home, but the miles flew by and I found myself driving through the heart of downtown Chicago at Noon.
For those of you that don’t know, Chicago, like many major US cities, is notorious for clogged traffic constantly during any given day. There isn’t just a rush hour in the morning and evening commute. The propensity for back ups and slow moving along any highway or freeway is there 24/7/365.
Add to that the tremendous thunderstorm that moved through the heart of the city that morning, and you have what you need for disaster. Flooded roadways, buckled pavement and a heavy volume of weekday traffic had trouble spots all through Chicago’s highway system.

I took the straightest route and banged right through downtown at high noon. I never slowed down and found myself in Milwaukee a little after 1PM.

I was planning on stopping at Eau Claire to transfer the title and get a license plate. I thought I’d do this on my way home. This would have me getting another motel just 60 miles from home, and doing the paperwork on Friday morning.
I called Mrs. Spadoman to tell her of my triumphant negotiation of Chicago’s tollway system and she suggested I get the title and license at a facility on the way and not wait to get all the way to Eau Claire.
As I thought about this, it made sense. I had her look up the Wisconsin State licensing facilities along my planned route and ended up stopping in Osh Kosh. I was in and out in a flash and pulled into my own driveway at a quarter past seven.
The weather was varied with very harsh hot and humid conditions across the country on Tuesday and Wednesday, but Thursday brought in heavy morning thunderstorms and temperatures down into the 50’s. I had been driving with the A/C on max high for two days, and now I needed the defrosters to clear the fog off the windshield and was wearing a hoodie!
I’ll do some motorcycle reports after I take this baby on a few rides. For now, I had another adventure on the road. It’s my meditation of choice you know. Sure beats yoga in my book.
So, you may wonder what I might be doing, besides driving, to pass the time while on such a trip. Well, I wrote some songs during those long hours on the highway. I was thinking about this new motorcycle and how sporty it would be. I’d almost certainly have to get a new leather jacket, dontcha think? Then, I imagined myself cruising down a rural highway and pulling into a roadhouse for a cold beer and a burger.
Here, I’ll share one of them with you:
I was sittin’ by the TV,
Watchin’ the nightly news at 10
The reruns were kinda boring
On Nickelodeon
I had to find a solution
This old news was gettin’ me down
Maybe I’ll ride the cycle to that place outside of town
(Chorus)
To Emma’s Roadhouse
Emma’s Roadhouse
8 miles down the highway
Livin’ free with some of my friends
The highway was terrific
The miles flew by like time
I crossed the old pulaski bridge
Ahead I could see the sign
I pulled on off the highway
I was lookin’ for a spot
I spent the next two hours cruisin’ ‘round that parkin’ lot
(Repeat Chorus)
(Solos, riffs and general band mayhem)
Before I knew it was over
It was time to travel home
I didn’t want to leave so soon
I knew I was not alone
We yelled and screamed and made a fuss
And told her, “WE WON’T GO”
Bartender set another round and turn the lights down low
(Repeat chorus twice and out!)

Sounds like a nearly perfect trip. Thinking about it would have had me anxious but the doing is never so bad. Glad you found yourself a new toy - hope it brings you lots of joy. Oh look! I rhymed!

this made me grin from cheek to cheek - thank you for that!

love the sunrise photo and the old house one too

so glad you had a good distraction from a tricky time of year - I know it's not at all the same, but my mother died on Valentine's Day (20 years ago this year, too) and I find I have to do something a bit different

love hearing about your trips

In a band as well? I'm proposing two more bets, they're easy for me - the Packers will not only beat da Bears twice this year, they will mop of the field with them. Of course, this all depends on whether or not the billionaire owners decide to "allow" us the privilege of watching our teams play. I figure if we make the bets we'll have to see each other twice a year, unless, for some wild & crazy reason da Bears slide into the playoffs & we will need to clean the field one more time. Same stakes? Meals of choice for Mrs. Spadoman & Mrs. coldH2O? Later & I'm glad & jealous of your new bike.

Doesn't seem like 20 years, huh.
But what a fitting event, what an affirmation of what you know to be true about that gal of yours.
I know she has to be smiling.

And wow......what glorious photos as a tribute to a glorious creature you were gifted with.

Why does that not surprise me. *laughing*

That sounds like one excellent road trip. I'm so sorry you lost your daughter - miles pass like time. Be well.