On The Road To The Border

It's early in the morning here at Spadoville. The sun is popping up and there is not a cloud to be seen. A beautiful day for traveling. I've been up and getting some things packed. I'm heading out on my newest toy, the Triumph Scrambler. I sold my Triumph Tiger. It has given me great service, a lot of fun and more memories than I can ever remember in a lifetime. Every mile an adventure. Every wheelie, every twisted curve, every mile, every trip.

This Scrambler is a smaller, lighter bike with off-road capabilities, at least off-road enough for some gravel forest service roads and some dirt along with the asphalt. So today, I'm going to give it a little long range test run. I'm heading up to Ontario Canada.


I'll cross the border at Fort Frances, across the Rainy River from International Falls, Minnesota. I'll get up to Falls by tonight and cross in the morning. In fact, I have an appointment with the border people at 9:00 AM. I'm thinking breakfast in Canada tomorrow, then a ride across on Canada Hwy 11, through Atikoken, to Thunder Bay, which is located along the North shore of the Great Lake Superior. Just North of Atikoken is one of the places where in used to guide canoe and fishing trips back when I did that sort of thing. 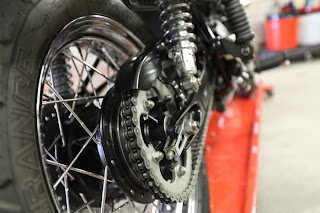 I'll come South in Minnesota along the big lake and stop off to savor the beautiful scenery that abounds up that way. So, it's just a three day ride. A good shake-down for the bike and me to bond a little. I have only ridden a few short local jaunts since I went to New York to pick it up after I bought it on Ebay.

The plan is to get off the hardtop and onto some gravel in the National Forest on the US side and the Provincial Parks in Canada. I'll also see if my passport works as it's been a while since I've crossed the border.

Reports and photos when I return. I'll try to stop riding and take some pictures, although that has been a tall order in the past. Seems that what my mind sees and records in the camera in my head usually suffices for my own memories. To share any of that, I have to use the camera. I just hate to stop riding, park the bike, take off the gloves, unzip the riding gear, take off the helmet and goggles, dig out the camera, focus and set up the shot, snap the picture, then, do it all in reverse, get back on the road and see another great photo op within the nextmile or two and do it again. It will be a chore, but I will try to be patient and stop along the way so I can share the memories. In the meantime, I was playin' around with my iTunes and found a few of what I call classic gems from the old Dump and Shortcake Band days. Click on the title of this post and you'll hear a studio version of Lowell George's "Willin'". Originally done by Little Feat in 1971. The recording we did had to be in the 1970's sometime. My good friend and wonderful guitar player, Dave Coffey, is with me as I solo on this one.

Take care and be well. I'll be back soon to get ready for another trip to Elkader, Iowa and the surrounding area early in July.

I hope you have a wonderful trip! My husband and I hope to visit the north side of Lake Superior in late summer so I'll be interested in what you have to say about what you saw and enjoyed. :)

Happy travels, Spadoman. You can think of all your blog friends riding pillion. I at least promise not to nag you to stop and take photos.

Have a great trip!

IF you stop along the way for an eyefull, you can drag out the camera.
Get your head emptied and your senses filled, that's what matters, eh?

Oh you're off again! I couldn't get the earlier song to play but this one did - it's a lovely song and makes a peaceful accompaniment to my coffee this morning. Thank you 'Man.
Unlike Christopher I would certainly beg you to stop and take photos :) Though it does sound like a bit of a performance so maybe not too often.
Have a wonderful trip.

Drive safely and have a wonderful trip.