This Book Report is Overdue

Some time ago I was tagged by a very good Blog friend to answer some questions about books. I’ll attempt a response here today. By the way, I am flattered, humbled and honored to be thought of and asked. Being asked and allowed to answer questions is one of the greatest forms of respect I can think of.
Before I answer the questions, I just want to say that I don’t read as much as I could, or should, or think I should or could. I am busy reading the blogs, for one. I’m busy writing stories to pass on to my Grandchildren as well. I’m just, busy! I know many people read in bed before they retire for the evening. When I get tired, it’s time to sleep. If I go to bed, I fall asleep. But I always get a sense of guilt when asked about books just the same.
I like Tony Hillerman’s books, but usually have no interest in murder mysteries. It is sort of funny that I did do some reading while down in New Mexico living alone in the RV. I read one of Tony's books, then started one I picked up at the Black Cat Coffee Shop and Used Book Store.

I didn't read for very long. I fell asleep right away. I remember one time we had to stay in this cabin on one side of West Bearskin Lake in Northern Minnesota. There was thunder and lightning and heavy rain. To attempt to cross the lake in an aluminum canoe in such conditions would have been very dangerous.
There were others from the camp that stayed in the cabin as well. I laid down in a bunk and immediately fell asleep and started to snore. One of the others quipped, "Okay Joe, that was funny", as they heard me sounding like a roaring lion literally seconds after my head hit the pillow. Mrs. Spadoman, also along on the trip, explained to them that if I didn't get to sleep in a few moments, I had insomnia, and I wasn't pretending at all. They had to live with my snoring that night and let me have the aftermath for the next week!
Anyway, I better quit telling stories and get this book report done.
A Book that Changed My Life:
“Dear Dad, Letters From an Adult Child”, By Louie Anderson
Yes, he’s the comedian. He’s from Saint Paul, MN. The book reports his family life growing up in a large family and tolerating the effects of an alcoholic Father and how it has influenced his career. I have not had the alcoholism in my life as such, but many similar experiences for other reasons. The book takes you on a journey of wondering and getting answers. He pulls his siblings together, one by one, and examines the other viewpoints. He comes away with a thoughtful reason to forgive and ask forgiveness of his Father. He cleanses his soul to us openly. It helped me attempt to cleanse my own soul, to my friends and to my family, in my mind and in my life.
A Book I’ve Read More than Once: 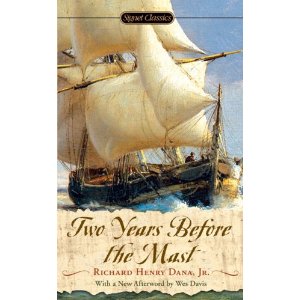 “Two Years Before the Mast”, By Richard Henry Dana
This ‘classic’, written from the point of view of a teenager sent to the high seas aboard an English working ship is epic history of a portion of a persons life. The descriptions of sea life and struggles over a period of time in a challenging environment is amazing. I reread excerpts, if not the whole book, often. Especially the narrative of sailing around Cape Horn, a well-known unsettled portion of the great oceans. It is adventure at its best.
A Book I Would Take With Me If I Were Stuck on a Desert Island: 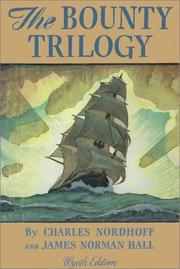 “Mutiny on the Bounty”, or better yet, the “Bounty Trilogy”, three books of the epic story of the HMS Bounty.  The narrative journal of Lieutenant William Bligh. The original written by James Nordhoff and Charles Norman Hall
Besides the obvious benefit of the tale of making it over 3000 miles of open water in a small open craft, the book is filled with adventure. I cannot accept how Bligh treated the crew, but must respect his resolve to see his plight and subsequent survival, just to meet the end of his own career when the truth be known back in England. I somehow transpose myself to these times, albeit as a pirate in a former life, and not as an English sailor. I could escape into this for hours. Seems I’d have plenty of these hours on a deserted island. The single, "Mutiny on the Bounty", is also a book I have read more than once.
A Book That Made Me Laugh:
I can’t think of any right now. I’m sure I’ve read funny books. Probably the last one written by Erma Bombeck before she left this world. Her view of life is uncanny and borders on hilarious.
A Book That Made Me Cry:
Here too, I cry at the movies, not so much in the books. I probably shed a tear or two or more when reading the first mentioned book by Louie Anderson. A comedian made me cry, go figure.
A Book That I Wish I had Written:
I wish I had written a book, or rather a guide, for returning soldiers from Vietnam, (and now other wars), about the affects of PTSD. The warning signs, coping skills, tools to combat the symptoms and live a happy normal life. Enough said about that.
A Book I Wish had Never Been Written:
The ones I want to read and just can’t find the time to get to them. If they had never been written, I wouldn’t feel like I need to read them. Crazy logic I know, but I just think everything has a reason. I really can’t think of a book title right now that should never have been written.
A Book I’ve Been Meaning to Read: 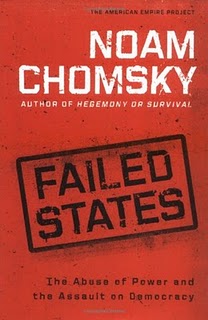 “Failed States”. By Noam Chomsky
It is about the abuse of power and the assault on Democracy. What can I say? Chomsky is a visionary and proves every point he makes with facts. I need some time, I’ll get to it. This book was written and gifted to me in 2006, but I feel it is still very pertinent for today.
A Book I’m Reading Now: 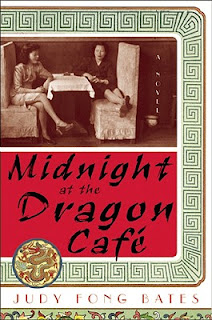 Actually, I just finished reading this one and haven’t started another. It is entitled “Midnight at the Dragon Cafe”. It’s an autobiography of a girl from Hong Kong who immigrates to Canada as a six year old. She narrates periods of her life through being a teen. Her Mother and father own a small Chinese restaurant in a small town near Toronto.
It is a showcase of character studies and the habits, morals and teachings of generational differences influenced by the change of countries.
The author, Judy Fong Bates, tells all. Her feelings, her observations and her secret thoughts to the reader. Like life itself, this book has no end that the author can write about as she is still alive and her life continued after the last sentence was read.
Honorable Mentions:
In the Heart of the Sea
Endurance: Shackletons Antarctic Adventure
Treasure Island
PrairyErth
Look 'em up if you're interested. I gotta hand this in before grades come out.
Okay, that chore is done. It was a good thing to do. Thanks for “tagging” me my friend. As I mentioned, I am flattered. Sorry it took three years to complete the assignment.
Well, you never said I had to do it right away!
So, what are you reading, anyway?

An interesting post. I love reading ...just love books so am always interested in hearing about more. What am I reading right now? ..."The Education of Little Tree, the story of a Cherokee Boyhood' by Forrest Carter ... I am not far into but am thoroughly enjoying seeing the world through Little Tree's eyes and mind. Have you read it?

I think I read Mutiny but perhaps I only saw the movie. I have tried to read Treasure Island many times but never got far strangely. It's been kicking around since I was a little girl.

I have read so many books. I remember very few of them.

Marilyn... Thanks for stopping by. I have read the Little Tree book, a couple of times. I love the story a lot. Those lessons are very powerful. I have the movie and the Grandkids watch it all the time.
I want to read more. I have stacks of books sitting around and a library card!
Thanks again.


Jeannie... As you probably noticed in this post and the previous one with the pirate ship, I love the seafaring tales. Something about that era when ships were on the seas for years at a time. They all kept logs. Even the journal of the HMS Bounty was written while Bligh was in the open boats for months. Intrigues me no end.
Thanks for coming by here to read. I'm sure I sailed past Belize when I was a pirtae in a former life!

Currently wading through 'The Fifth Elephant' which is a Terry Prachett book (or whoever, I can't be bothered to get up to look while I'm enjoying this cuppa coffee). It's slow going. *laughing* I find myself wanting to read with an English accent....bit time consuming because of that and definitely amusing even though I don't necessarily want it to be? (makes sense if you get the story of the English Invasion in this household....LOL)

I rather liked the list cuz I'm good for books--as they sit on the night stand collecting dust! (just an indication of how fruitful reading at bedtime is for me!) I wanna read--but bubbles and sidewalk chalk and adventures tend to mess with my plans.

Thanks for stopping by Mel.. You sound like me, dusty books always will wait for some fun with the kiddos.
Yes, get the little tree movie. Good for kids and adults of all ages.