I woke up this morning to a white landscape. Yesterday, it rained on and off all day and the night before I had heard the Thunderbeings pay us a visit. The snow is suppose to continue throughout the day and ease off by tonight. Then the sun will reappear, but cold temperature are expected to remain until after the weekend.

The Anishanabe Elders tell us that many things are happening around the first time we hear thunder in Spring. Usually, the bear awakes from its Winter slumber. A Sweat Lodge ceremony will be held and a feast will follow, welcoming the bear out of its den. It is the time of maple trees dripping sap and sugaring is taking place. The freeze up might allow another week or so of flow and more maple sugar when the warmer temperatures return. Pow Wow season is near and dancers are creating their outfits for the celebrations.

By cold, the NOAA weather service is predicting highs in the low 30's. Let's see, celsius, around zero. Out of all the choices to get weather, I like NOAA the best. They seem to have it pretty close most of the time. I kinda wish they were off this week, but that is not to be the case. 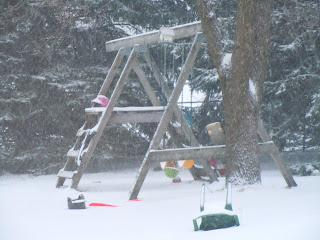 This swingset, which saw a lot of boisterous activity as recent as last Sunday, looks like it is settled into a long winter's nap. The toys scattered around will be picked up and used again very soon, I'm sure. That's a small plastic kids Adirondack chair leaning on its front end in the foreground, and looks like a batting helmet on the top step that was left there after some whiffle ball batting practice.

It may seem strange, but with a little observation I can clearly see these signs of Spring. They will take a break this week, then return soon. A few years ago, we had a heavy storm in April. Over 20 inches of snow. I left town and headed Southwest to New Mexico. This year, I just returned, maybe a bit early if I was really trying to escape Winter.

But I'll keep with my new found attitude about weather. That is, it is what it is and what it will be and sooner or later it will change. It is neither good nor bad for everybody. I mean, this snow might slow down the melt and allow the swollen rivers to settle a while and avoid a massive flood.

In the meantime, today's coffee shop time will be stretched out a little longer and the old men will have much to say, all knowing about the weather. There will be the humorous quips and the disgruntled quips and even the "good for the farmers" quips.

You know how I know? I'm one of the old men.

So, to pass the time, please go and take a look at the Aquatic Angels link on the top right of my sidebar. Make a small donation towards relief efforts in Japan. After that, I have a little game to play with you.

Below there is a photo. A little blurry, I know. I made it that way on purpose. Tell me what it is. The first one with a correct answer will be declared the winner. The winner will receive nothing of value, but hopefully some interaction and movement of your brain cells gazing at this object. I think this type of compensation is called "Bragging Rights". You can pretty much click any image on my posts to enlarge it. 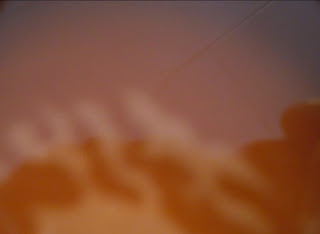 The answer will be posted here tomorrow morning, and you yourself can declare the victory.

So, be nice to each other and practice Peace today. I'll slip and slide on down to the Dish and the Spoon cafe and join the banter.

I love your weather report Spadoman. I like hearing about the Native elders rituals that are concomitant with the season. You are a man of great knowledge, much of which I don't have and would like to learn. I enjoy coming here for that. I have tried to figure out what that image is. It looks like it might be a profile of you with something on top of it. They looked like birds at first, but I don't think they are. I thought they might be a headdress too. My imagination ran away with me. Thank you for graciously putting the team link on your sidebar. I am deeply grateful and the Japanese People are grateful for all help they receive and deserve.
Peace and Light,
Noelle

The old Dish and the Spoon sounds one whole hell of a lot better than the office. Have fun!

New Guy:
This storm is turning out to be a big nothing up here. Less than an inch fell overnight - 12-16" was forecast. Oh well.
It was so good to see you guys last week. We need to repeat it, somehow come up with a schedule. Later.

Oh, definitely a steaming hot cuppa--either that or it's someone spilt milk from their cereal and they've made a cactus, a snake and a cowboy in the milk mess!

Keep the snow, dearheart. I appreciate it BEYOND beyond.

I hope you had a good old chin wag with a great cup of coffee. . .

. . .as for the image, I'd have said spilt OJ (but then again, I'm not wearing my glasses so it's all extremely blurry!)

Wow! You still have snow. You must be so ready for Spring!
Wonderful to hear about the thunder beings waking the bear and sugar dripping from the maple.