Before I start my Monday Magical Mystery Tour, I want to mention there is a new series posted on my Ashland Peace Blog. Please have a look.

We had the pleasure of visiting the Aquarium of the Pacific in Long Beach, California last month while on our Southwestern trip. I'd like to share some photos with you and tell you about this fabulous place.

First of all, our hosts were some really good friends of ours that live in Redondo Beach. Mrs. Spadoman's friendship goes back to seven years old and a Catholic elementary school in suburban Chicago. We paid them a visit over a long weekend. After listening to a number of renditions of various Beatles hits, we needed wanted to get out and enjoy the day. One of the activities was to be taking the boat out, but the weather did not cooperate. It was suggested that we go see the aquarium. We were all in agreement.

The aquarium lies in Long Beach in the shadow of the original Queen Mary. It is docked in Long Beach and used as a Hotel these days. One of the last of the old Steamships that sailed the seas in its era.

I've visited aquariums before, but none like this one. Exhibit after exhibit and an array of tanks with views from the top and bottom. One large tank even had three divers down, all with full dive gear, handling the fish. One would speak and the other would point out the characteristic being explained. It was fascination to say the least.

The Sea Bass in the photo above weighed in at over 200 pounds. The photo doesn't seem to show its massive size, but believe me, that head shot was over a foot wide! Go ahead, click on any of these photos to enlarge them and get a close-up view.

There were numerous tanks of jellyfish, and they were in all kinds of positions. In fact, I'm not sure which way is up. They were all beautiful in their form and movement.
The Jellyfish are found in every ocean and can thrive in very cold arctic water as well as warmer tropical seas. There are many varieties and most are translucent. The colors here are created by the lighting of the tanks. Their movements mesmerized me and I found myself standing there watching them for quite some time.

The large tanks, which had access for viewing from the surface, or from underwater pedestrian walkways, had sharks of all kinds swimming amongst stingrays and other fish. The Stingray tanks had people milling around so we went and took a closer look.

Seems the Stingray loves contact with people. They come to you and ask you to pet them and touch them. This one was swimming along the side then abruptly stopped as I photographed. A blur beneath the surface, then his head popped out of the water and I'm sure I saw a smile. I never realized how friendly they could be. I'm sure if I saw one in the wild I'd be terrified. 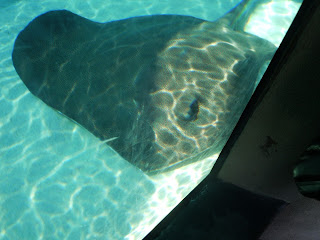 We ventured through the aquarium and watched entertainment and street vendors along with a great lunch at Bubba Gump's Shrimp Company. As they go, corporate restaurants don't thrill me, but Bubba Gump's had a great feel to it and a great selection of fish and shrimp. The service was very good as all waitrons serviced all patrons. Refills of my iced tea were coming from all directions.

It was a bright sunny day and that helped the colors radiate from this one tank in particular. This very short YouTube video captures some of the more colorful varieties as they dart back and forth.

Hoped you liked this short journey. We spent hours there. It is a great place to visit and seemed to be very child friendly. We didn't have the Grandkids on this trip, but I know they would have enjoyed seeing this place.

Just a reminder to check out the Aquatic Angels link on the top right of my side bar to donate to those struggling in Japan.  Thank you.

it seems an interesting day. I really like your shadow shot image. I was there. on the Saturday when there were over 100,000 people there. it was a mad crush of people, but awesome at the same time. I like your blog.

I can see why you spent hours there, it looks such a wonderful place. Your photos are fantastic and I loved the video clip of the wee colourful fish.

and some wonderful photos - especially that last one. . .

my big brother used to live in Redondo Beach but I never really saw it before, so thanks for the glimpse

Omgosh the starfishie--how cool is that?!

Been there a few times with a sister who lives in LA. You gave a grand tour.

It's those wee fishies darting about that make me chuckle. I think we should name the little stripey guy! :-)

aquatic angels fit right into your seafaring post today!!!
gorgeous pictures...and i love the one that captured your reflection..bravo!!

thanks for the magical mystery tour!
yep...i could hear barb's beatles like a blast from the past of all our youth.

it is an amazingly peace and hope filled letter.

so blessed to walk in peace beside you.

That was a wonderful series of pictures to go with your story. I read a few weeks ago that a scientist is working with a dolphin in trying to develop a mutual language. Wouldn't that be marvelous?

Thanks for sharing the journey.

What a beautiful set of images. The starfish is particularly good - such fun and so interesting!