Shadow Shot Sunday eminates from Brisbane, Queensland, Australia. Have a look at Hey Harriet, mateys, and see how to participate, or just look at the fine art examples shown by the masses. 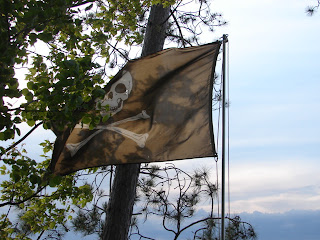 The day wasn’t very bright, but the shadows were cast behind the flag of the Pirate’s sleek ketch rigged craft. This particular flag has flown in some very unusual places in its lifetime. More about that later. For now, she be wavin’ aloft at The Cabinette near Ashland, Wisconsin, along the shores o’ the Great Lake Superior. 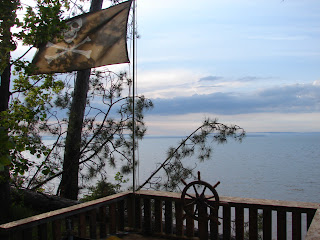 Tended by the acting Cap’n and First Mate of the good ship Quivering Thigh, taken in 1983 along with the bounty of the frigate itself, two chests of gold doubloons, forty pistols, 73 cutlass’ and one good-lookin’ dark haired wench of dubious chastity. 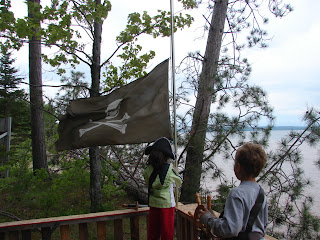 The replica was built on the shore to the specifications put forth by one Cap’n Jack Spadelow. Now don’t be confused with Jack Sparrow, the newcomer in the Disney movies. Spadelow has been around since the early 1980’s as you can see in the photo below. The head on the wall was a relief sculpted by those that wished for his head to be thusly mounted, but to no avail as Spadelow was too crafty of a seaman to be captured.
Handing over the wheel to his Grandchildren, Spadelow is now retired from the sea and lives along the tiny Kinnickinnic River in Northwestern Wisconsin. Having all the gold a man would need and the same aforementioned wench at his side, he lives a peaceful life despite there being those that still hunt his head. 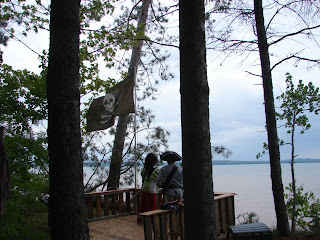 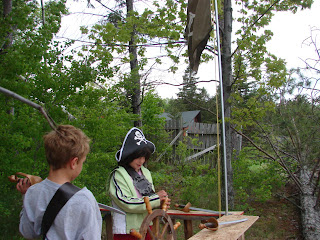 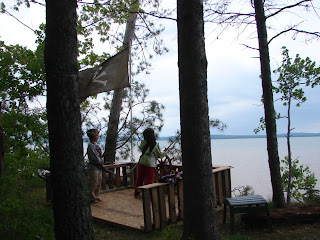 He tried to get retirement pay and disability. When asked how he lost his arm and his leg, he replied it was in the Pirate service, cut off by cutlass in hand to hand combat while boarding a British craft in the Mediteranian, a worthy and acceptable reason for losing limbs, and well acceptable to receive the compensation due a lifetime o' work upon the sea.

But when he was asked about the injury and loss of his left eye, he mentioned the bird that spit forth his digestion while flying overhead and said, “Aye mate, it be the first day wit me new hook!”
Needless to say, the disability claim for the loss of an eye was declined. So he stirs little and watches the youngsters board and fight and hoist the black and white Jolly Roger, awaiting his inevitable trip to Davey Jones’ Locker.
The flag has seen the heights of Mt. Whitney California. At  14,505 feet above sea level, and the great Motorcycle Rally and Races at Sturgis, South Dakota, which lies a far distance from any body o’ water. It has flown on waters in Minnesota and Wisconsin, USA and across the International border in Ontario, Canada.

Well worn, but still able to put the fear of the Good Lord Almighty into the hearts of all that believe in make believe.

The ship still sails in the minds of children and childlike adults. The stories of the sea reenacted with swords and a ships wheel that turns about the craft on a dime that happens to be in the pocket of a Commander of a French Man-O-War loaded with diamonds, rubies, gold, silver, tobacco and rum.
Still havin’ fun lads and lasses, that’s what she be all about. And still dreamin’ the dreams of a great Cap’n rich in blood, guts, rapin', pillagin', booze and gold.

Peace be alive me hearties, she’ll be right mate, a keg o’ rum a time or two. Look out across the land and water as far as ye can see. Now, look a little farther and you’ll be seein’ the Quivering Thigh!
AURRRRRRRRRRRRGH!!!!!!!
Posted by Spadoman at 3:01 PM

Oh, what a fun post for the day! All that and great shadows, too! Definitely made my afternoon, Matey! Have a great weekend, hope you find lots of treasures!

OMG, I'm still LOL...what a hoot, the Quivering Thigh, what a bunch of piratewanabees. Something about a man in a striped shirt and an eye patch that just shivers me timbers!!!

What a blast, you certainly know how to while away the hours in style, with a hearty yo ho ho and a bottle o rum!!! Great memories though, we gotta hav'um, otherwise life would just be...well, life!

Still cold in Ioway, 29 degrees, but we're still hopeful of springtime, keep fergitin it's still only March, those 70 degree days left us hoping for more!

Hope all is well with you Northuners...and here's a toast to the brave mateys of the Quivering Thigh, YO HO!!!

Oh what a fun post; I am only too pleased that my ancestors didn't come across Capt'n Spadelow as they sailed the treacherous seas to New Zealand. The whole crew look as though they would fill anyone with fear.

ohh the seven seas calls out to one in the morning mist of another landlocked day.... so happy you shared another part of your lovely life... all wenches have a weakness for pirates regardless of their losses or gains.... now that head... that is sorta freaky to a soft hearted wench as myself but life is life and one must gaze upon it all and what is given... shiverin in me timbers..

Gorgeous! Thanks for the laugh.

My shadows, have a great weekend!

Hey, New Guy, great post & funny & sweet. We saw your kid up here the other day. Said she had come over from Duluth. She was in a rush so we didn't have too much time to talk with her, still, it was good seeing her. Arrgggg, yourself.

I read this with a deep thigh, wondering how there came to be only one thigh to quiver and what happened to the other, when all became clear: Long John Silver only had one leg!

This has to be one of the most fun posts I've read in a long time! Loved every word! You do 'pirate talk' really well! Most entertaining! Thanks for the Sunday laughs :)

Oh, what a great place for the grands to sail from. Spectacular view! And wonderful photos of the shadows of the leaves on the Jolly Roger.
We have one for September's event.
*snickering* The neighbors get so confused.
Jolly Roger, Union Jack, St. George's flag--the good ol' stars and stripes...

We believe in variety! LOL

this was a delightful stop on my Sunday morning shadow hopping in blogland. I enjoy discovering blogs of my fellow Wisconsinites and yours is wonderful. we escaped those 17 inches of snow that the northern parts of the state got last week. about all that we can claim is "spring-like" these days is the longer daylight hours. temps still very chilly. thanks for regaling us with your "Quivering Thighs" tale. happy SSS! argggh!

You're so funny! You must keep those grandchildren immensely entertained!! Happy Sunday :)

Avast 'ye matey ! Rrrrrrr Rrrrrrr!
Ye' have sea salt in your veins? I hope? t'other wise you have crossed the sacred pirate code by impersonating one of us (or both of us ? hehehe) .. I am a salty puppy myself (called a Blue Nose) and the Atlantic roars in my ears (gets a bit noisy in here) .. so I am given ye the courtesy of believen ya'
Well done with a piratey ? yarn .. remember to keep your oars in the water and you 'eye' on the horizon for another skull and cross bones to check your skills as a true pirate !
Best booty to ye and your pirateers!
Me .. Joy ? : )

What a fun post! Thanks for the laughs and entertainment... and great shadows to boot!

And thanks for stopping by. You're right, Colorado Blvd was part of old route 66!

Have a great week,
Esther

*Laughing* I so enjoyed this :)
And the shadows!


me?
i see pirate every day
where i live
down here
in florida...

Well, it's better than the president's speech, trying to explain why we are involved in a 3rd war.