Shadow Shot Sunday is the creation of Tracy at the Hey Harriet blog. To see morwe Shadow Shots, or to find out how to participate in this fun meme, visit Hey Harriet. Many post on Saturdays here in the USA as it is already Sunday in Australia, where Hey Harriet and many of its contributers are centered.

I like shadow shots with people in action. On the road later in the day in mid summer always casts a moving shadow, but seldom am I ever in a position to capture it as I’m usually busy doing the driving. Answer to that? Give the camera to the rider and let her have a go at it. 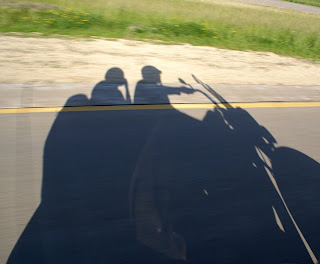 When I’m riding the motorcycle and the sun starts to crash down in the West, I often see the long stark shadow that gets created. As I ride, and the road twists and turns, the shadow moves back and forth, side to side, and if the terrain rises and falls, it stretches up and down. I do have a movie camera mount on my motorcycle, but to aim it at a moving shadow while riding is not in the best interest of the rider.
I like this one. A crisp clear image of the riders, and the blur of motion in the background all in one. This was taken while on the Crow Creek ride in the Summer of 2009. I knew I had it, so I searched all morning and finally found it. That in itself was a journey as I came across so many photos that were archived and not labeled that brought back memories and gave me topics for future stories.
Anyway, I broke my old camera, but I purchased a new one and I’ll be happy when I get a chance to read the seven thousand page instruction manual and get out and take some new pictures. ( I was exagerating about how many pages thew manual is, it's only a half inch, or 12.7 millimeters, thick) Thank goodness for archives. Now, if I can remember to label and date each shot.

Adore these action shadows! I am a lover of motorbikes, but I'm afraid that I must be classed as an "armchair rider"! Don't own one nor have the opportunity to ride with someone else! So I settle my yearnings by photographing motorbikes!

A nice one. And so it so represents a huge part of you.

This is so terrific! Could almost feel the wind in my hair. Haven't been on one in many years! Great memories! Such a fun shadow shot! Thanks for sharing it! Enjoy your Labor Day Weekend!!

What a fun shot! And what fun for the rider!!

Well, it might as well be 7000 pages as far as this blond direction reader goes(not)...don't do well with instructions, I'm that hands on figger it out for myself kinda gal...instructions do not compute...they're for guys!!!

I do love digital cameras though... no more film to process-- you can click away & enjoy finding the very best shot.

I love your action shot! Have fun playing with your new toy. I always try to manage without the manuals thinking I can figure things out but it never works that way. I end up having to read through them in the end.

I have to say I had one hell of a giggle about the manual .. i too have a fear of manuals .. in fact, just wave one at me (and it doesn't even have to be mine) and I run away screaming .. just a quirk of mine ;-)
Yes .. no blur in action .. perfect rendition of "the rider and driver"
I can almost hear the roar of the engine ! : )
Joy

but now I'm interested in the movie camera attahed to your bike!

The best setting on my new camera is 'intelligent auto'!! I love your shadow shot - but you will never get me on a motorbike!!

That's terrific! Love your description too! Enjoy the bike...and camera!

Particularly this time of year when those shadows are dancing long.

You need a Go Pro video camera to get those shots of what you see while driving! It has a suction device so that it can attach to your helmet and it does not come off! My husband has had his on a jet ski, on skis, and who knows what other places!
Type in Go Pro on You Tube to see what I mean.
That would be such a coll perspective to be able to see what you see.

two shadow riders
will disappear at sundown
swallowed by darkness