Shadow Shot Sunday was started by Tracy in Australia. To see more Shadow Shots and to find out how to participate, go see Hey Harriet. 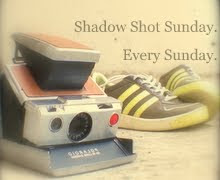 On a recent motorcycle trip to New Mexico in America's Southwest, I stumbled across many sights like the one I posted here today. I stayed on the small two-lane roads and passed through the heart of many small hamlets. If the Interstate highway was nearby, all the commerce moved from the main drag through town out to the freeway. If the town was just on a once major US highway and not near the Eisenhower Interstate System, there isn't much left of these villages as time has passed them by.

This Shadow Shot was taken in Walsenburg, Colorado while on a morning walk before leaving my austere overnight accommodations at The Anchor Motel. Walsenburg is right on Intersate 25. There is commerce out on the highway, but not much in town. This photo takes us way back in time and shows a popular old style of architecture for what once was called a gas station.

Used to be, this is the where you bought gasoline, or as it's called around the world, everywhere but the US, petrol. The pump, yes, one pump, vended the toxicant and was operated by a human being that actually managed the whole establishment. He would come out, (it was usually a "he"), and ask what you'd want. You would tell him to either, "Fill 'er up", or say a dollar amount, like, "Two dollars of Ethyl, please."

That whole Ethyl thing was a National disaster, but that is another topic for another time. It just meant they had a higher octane gasoline with an additive that was poison. Conventional wisdom thought that the higher powered gas was better for your car, so you'd splurge and get "High test" every now and again to give your automobile a treat.

These next two shots also have some shadows created by ole sol on Sandy's Service. You can see the large garage door opening where the mechanic might work on your car, perform maintenance like oil changes, replace belts and hoses and hoist the auto up to fix flats or change tires. Ah yes, those were the days. 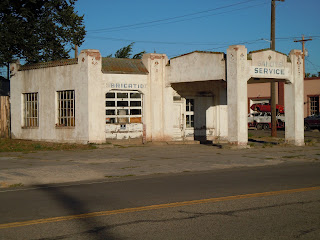 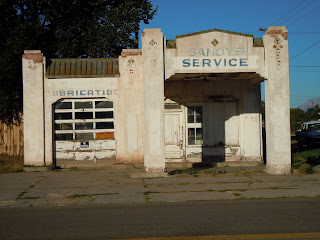 I certainly could go on and on about the old days and gas stations as I worked at a few of them over theyears. Of course the most common mention about gasoline these days is the price. On my trip, I saw prices range from $2.34/9 to $3.14/9 per gallon. I used today's high test in my 2008 Triumph Tiger and pay more per gallon for that! (A full report about the trip coming soon on one of my Monday Mystery Tour articles for those that might be interested)

In the meantime, hope you have a great day. And avast ye, don't ferget about the day fer us old pirate souls, Aurggggggggggh Matey

The gas station guy
disappeared long ago, but
his shadow remains.

Omgosh......I love it!
Mostly cuz I love those old structures. I miss the little green dinosaurs (though I still see 'em hanging around now and then...).
And the guy who pumps the gas and washes the windows and checks the oil....

Arrrrrrr!!
We be flyin' the Jolly Rogers, even in the wet 'n cold.

Ahoy matey...lots of memories here too of the days of old, yet we are young in our 61 year old vessels on our journey in our Mother's realm.

You just take the bestest adventures...my longing for the open road these days, never gets much farther than a hundred miles from the chateau, yet when I'm on the road, I can transport myself to those back roads I so loved to travel cross country and dream of someday traveling again...me and my dog and the open range, off into the sunset...ahhhh...doesn't get much better'n that!!!

Have a great Sunday!

Wonderful! That old gas station is a perfect subject for good shadow shots.

Wow! Terrific post and it did bring back so many memories! I love it! Hope you've had a great weekend! Enjoy the day! Thanks as always for your visit and comment! Much appreciated!

Today is a vehicle/gas related day for me coming over to your place to "chat" : )
I went to turn my car on (little green Sunfire '99 .. aka my "plant-mobile" garden related joke)
Well .. it was dead as a door nail, what are those exactly ? and why do we say that ? .. in any case .. husband's vehicle was home (he was fishing with a friend) .. sounds like a long story doesn't it ? : )
I hadn't driven the new vehicle yet and was a little shy of it (Kia Sorrento) .. so I just went to the drugstore and back .. and my heart is still beating fast ? LOL
Off topic right ? .. I fear the loss of my plant-mobile is coming to a head .. as this very quaint gas station .. I can feel the ache of loss for both time, place, and my car ?
Joy ;-)

I love old gas stations! I've thought I need to start collecting photos of them like I do the neon signs and roadside kitsch. You just see less and less of them as the years wear on. Great SSs...thanks for sharing them!

I was through Walsenberg about two years ago when I went to a painting class farther up the highway. But what amazes me is that the old gas station hasn't been razed. You've captured a bit of history here.

love the boldness of that first shot - enjoy San Miguel when you get to visit...a real treat of a place...

Wouldn't it be wonderful to have someone wash your windows and pump your gas?

We saw evidence crossing the country of little gas stations and motels on side roads that used to be main roads. The interstates killed a lot of the old businesses outright. It's lovely to see this place that still abides in New Mexico. Great photos too.

I love your photos of Sandy's Service Station! What a great find! Old gas stations are not something I'm lucky enough to see around my parts! They've all been torn down so seeing this one is a treat :)

Hope you have a wonderful week ahead!

you write so well

Thank you all very much for your comments and for the very kind words. Wish I could just travel all the time and stop and take pictures. There is so much in this world.

I love Walsenburg! What a wonderful old gas station. It's so much fun to find sites like that off the beaten path! I'm surprised it hasn't been made into an artist's studio by now.
Good job!

Oh man, I missed Talk Like A Pirate Day???? How???? You even gave me a clue with your blog comment. Sheesh.

I like imagining what life must have been like working in old buildings like that gas station. And how cool is it that the person who built the building actually cared about the look of the place? Today seems all about boxes...this gas station had - has - character.