A Couple of Trips to the VA Medical Center 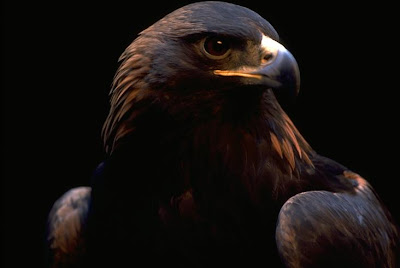 I thought the Eagle photo was appropriate for a post about the VA. Besides, it's a nice pic.


So, I had some appointments at the VA recently. In the past, I have had some problems and I have also had some great treatment with no problems. This past week, I had to see the dentist and someone in the mental health department. I must tell you, the meeting with the mental health professional went great. I am involved with a PTSD support group with eight other Vietnam Veterans. The facilitator wants to see each participant one-on-one every other month or so. This appointment was my bimonthly meeting. Incidentally, the issue of health care is important to me. I have health care through the VA and I am glad I do. More on this issue in another post.

I went to an appointment in the mental health department at the VA the other day, for this bimonthly meeting. The doctor's name is Thad and he asks that we call him by his first name and not Doctor or Mister. He is younger than the Vietnam Vets that are in the group. He sits quietly by and lets us talk and bounce things back and forth off of each other. The group is very helpful. For me, it mostly fills the gap of structure in my life. I have learned that I do better mentally with some structure.

I’m going to make a statement here, before I get too involved with this story. When people mention mental health and psychologists and group work, people have a tendency to immediately judge that one is unstable or has a mental problem. Do what you must, but I feel that the mental health department is by far the best at keeping me healthy and not just giving me pills to alleviate an ache or pain. In fact, I don’t take any medication for anxiety, depression, sleeplessness or any other mental problem. I go to group and see the doc once in a while and that keeps me pretty darn healthy.

Now the dentist is another story. Check this out. I was seeing the dentist at the VA in Minneapolis two years ago. I had some work done. Treatment of a few cavities, a bridge on my lower front teeth and a cleaning. When I was done with all that, I had a treatment plan that had the dentistry department making me a crown on a lower molar, making me a bridge on an upper molar that I was missing and another bridge or implant for a front tooth I was missing from an extraction a few years ago.

I took a break from seeing the dentist and the break lasted almost a year. When I went into the office to make an appointment, they told me that even though my records were there, it has been too long since I was seen there and that I must go to a fee basis and see a doctor. The fee basis deal is when they let you go get a dentist on the outside of the VA system and they pay for it because I am eligible for dental services through the VA.

I first had to go to an office at the Minneapolis VA that was in the basement where they verified my eligibility. I did that, then went home and called Delta Dental of California.

Delta Dental, hereby known as DD, asked a few questions and told me that I had been approved by the VA and that I needed to choose a dentist. I didn’t know any local dentist because I have been a disabled veteran for a number of years and had been receiving all of my medical care, dental and other wise, at the Minneapolis VA Medical Center. The phone clerk asked for my zip code and mentioned three dentists in the local area. I chose one. My choice was based solely on knowing where the office was located and nothing else. A blind shot in the dark.

I went to this dentist and told them I was on DD’s Project Hero. I should have known right then that this wasn’t the place to be because the dentist didn’t seem interested in seeing me, but I was eventually seen for an exam, x-rays, an assessment of what was needed and a cleaning. These procedures were okayed through the VA and the dentist agreed to perform them at an agreed price that the doctor and the VA negotiate. I would not have to pay for anything.

In filling out a form for the dentist, they wanted me to sign that I would be responsible for the bill if he did anything the VA wouldn’t cover. I refused and said that I wanted him to only do what is covered. We argued this point a few minutes. I agreed that if I wanted to do anything deviant from the approved procedures, I would indeed pay myself, but I wouldn’t pay if the dentist didn’t tell me about said procedures first. Fair deal, I thought.

I had x-rays, he examined me, he probed and stuck the pointy pick in between my gums. It hurt like hell. He was not a gentle dentist and was actually rather rough. He came up with the exact assessment the Va did. Build a crown on a lower molar, make a bridge for an upper molar and bridge or implant for a front tooth.

He told me that there would be a long wait. I was used to that because there is always a long wait at the VA for dental and eye care. Medical care from my primary care physician is quicker. I can usually get in to see him in a couple of weeks.

I waited and waited. In the meantime, I moved away from the area where the dentist was and into my current residence in River Falls, Wisconsin. I called DD because I hadn’t heard anything in a long time, ten months had gone by. I know I moved, but since I use a cell phone for a home phone, my phone number didn’t change. And I did put in a change of address form at the Post Office to forward all my first class mail.

DD told me that they were waiting for x-rays from the butcher, I mean the dentist. I voiced my disgust with his torture and told the clerk I had moved and could I see another dentist. She advised me to go to the VA and ask them. So, I was at the VA one day for other business and I stopped up to see the dental office to ask how I might proceed with this change of venue.

A very nice clerk took my contact information and I was told that an appointment clerk would call me. Well low and behold if I didn’t get a call a day later and an appointment was made for the next week. That appointment was last Monday, September 28th. I saw the same doctor I had when I had been receiving dental care at the VA two years ago.

They took x-rays and he examined me. He was so gentle, I hardly felt his fingers in my mouth and I’m not even close to exaggerating this fact. He said I don’t have any cavities and that I should continue to brush and floss. He made an appointment for me to get a cleaning and made another appointment to start the rehab work. He’ll start with that crown of the lower molar. 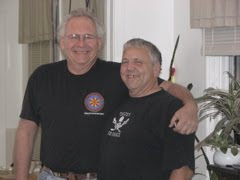 When I asked why I was seen at the VA instead of the fee basis deal I was told that the VA was out of money for the fee basis program. The doctor, thinking I wanted to be seen by an outside dentist, offered this piece of information. He told me the fee basis program through DD was out of money and that there might be more money for the program available after the end of the fiscal year which was coming up. I told him was very pleased with his work and I wanted to continue getting treated at the VA.

So, I will have to wait over two months for the cleaning, and the actual dental work won’t start until sometime in January of 2010, but I’m on my way. I should have a full set of teeth, some fake, some real, by the end of 2010. I started seeing the VA dentist in October of 2004.

Now, I need to see about some glasses.

For those of you not familiar with what I look like, I'm the one on the right.

Hi, Joe
You inspired me with your last post so I linked to you from my own honest scrap. Different from yours, I thought, yet there are similarities because my daughter and I have navigated the mental health system together and what a trip that was.

I had forgotten I am eligible for care at the VA Hospitals. That takes a load of healthcare worry off my back. Thanks, Joe.

Now, to find one close to home.

Ms Sphinx... Thanks for stopping here. Come and get inspired any time. Different as we are all different but the same. I did read your post. I loved the way you shared your life with us, (me).
Peace.

Crow... I don't know how you are eligible, but go there and start the process. If you can get health care, get it. If there is no VA medical center near you, they either let you go to a doctor near you and pay for it, or they might pay you mileage. But I believe there are VA medical centers in Coatesville, PA and Wilmington, DE and clinics spread out in other communities. Good luck with that.

Peace, and thanks for stopping by.